Kupala ritual is one of the biggest summer holidays not only in Ukraine, but also for many European nations.

«Kupala Night is so short. We have Kupala in the street»

It is a celebration of the summer solstice, which was celebrated on June 24, old (7 July – new) style: midsommar (mid summer) – in Sweden, Saint Jeans (St. Jean)  - in France, flakagajt (day of fire) – for Albanians,  sobotka – for Polish, kresu den (fire day) – for Slovenians, Janovden –  for Bulgarians, Ivana Kupala – for  Eastern Slavs.

This holiday symbolizes the birth of the summer sun – Kupalo. The history of the Christian Church can answer us how the pagan deity Kupalo get the name of Ivan. In the IV century AD,this day was proclaimed  the holiday of the birth of John the Baptist - the forerunner of Jesus Christ. As a result of the Christianization of the pagan feast the name "Kupala" got connected with the Christian "Ivan". On the territory of Ukraine for many centuries Kupala customs changed, there were always local differences, they were  not everywhere equally preserved - the majority were saved in Polissia as one of the archaic zones of the Slavic world.

Kupalo is under the ban 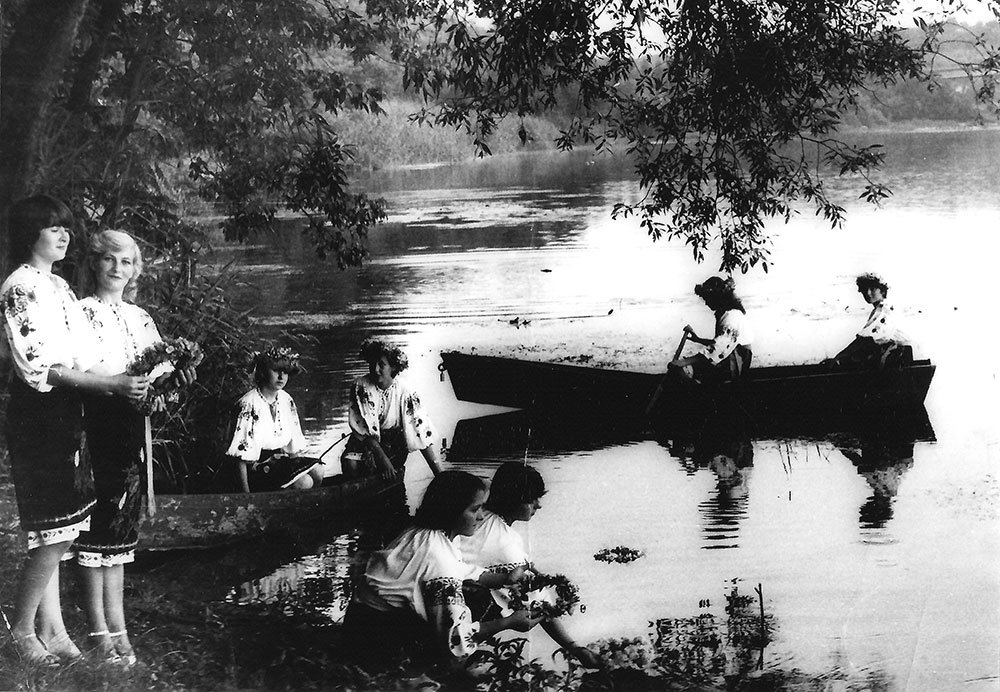 Celebration of Ivan Kupala Day at the Pivdennyi Buh River. Photo of the 1970's, the city of Vinnytsia
from the Fund of the Educational and Scientific Laboratory of Podillia Ethnology at the Department of History and Culture of Ukraine of the Mykhailo Kotsiubynskyi State Pedagogical University of Vinnytsia 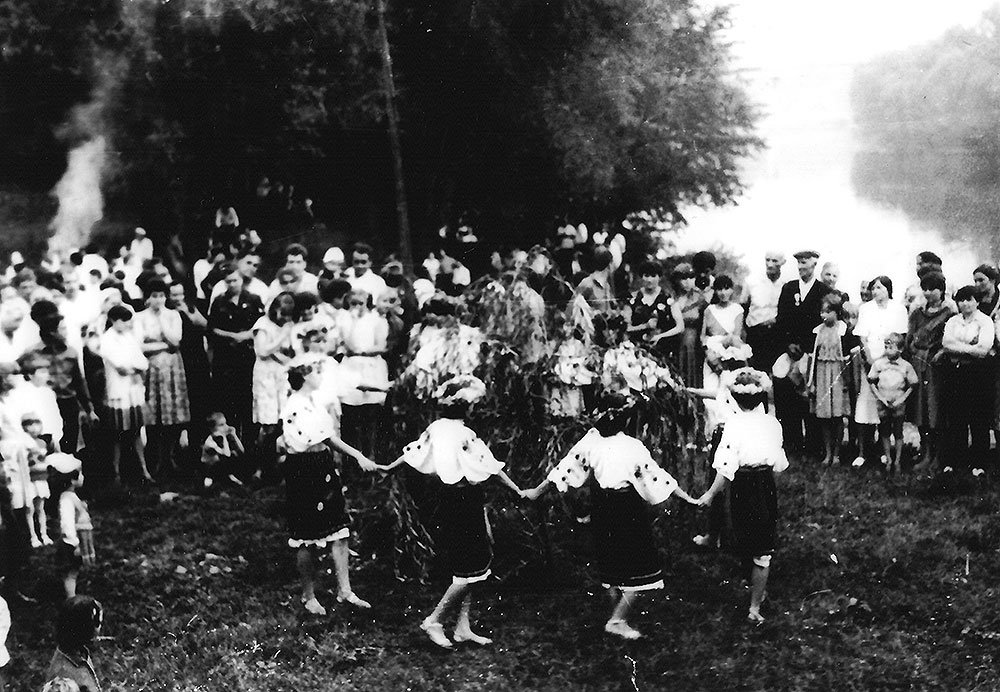 Celebration of Ivan Kupala Day at the Pivdennyi Buh River. Photo of the 1970's, the city of Vinnytsia
Fund of the Educational and Scientific Laboratory of Podillia Ethnology at the Department of History and Culture of Ukraine of the Mykhailo Kotsiubynskyi State Pedagogical University of Vinnytsia

The first written mention of the Kupalo holiday in Ukraine was  in Volyn (1262) and Hustyn (about 1620) chronicles and in "Synopsis" (1674). In the XVIII century, there were a number of documents testifying to the fierce struggle of the Church and secular authorities with the Kupala rite. For example, in 1719 Hetman of Zaporizhzhia Army, Chairman of the Cossack state of the left bank of Ukraine, Ivan Skoropadskyi  issued a decree "On parties, fisticuffs, gatherings on the holiday of  Ivan Kupala etc.", which granted the right to physically punish (tie up and beat with sticks) and excommunicate from the Church all participants of Kupala games. In 1723, Przemysl Cathedral in Bereziv banned dancing and entertainment near the Kupala fire. In 1769, Catherine II issued a decree banning the holiday. And despite all the prohibitions, the pagan nature of folk rituals was strong. The church also did not ban the holiday, though was trying to fill it with Christian content.

It is the pagan essence, mysticism, marriage-erotic motifs of Kupala rite that attracted the attention of many researchers and artists. Thanks to public ritual such art  masterpieces as the Opera "Ivana Kupala" by S. Pysarevskyi; folklore work of L. Ukrainka "Kupala in Volyn"; the story of M. Gogol "Night of Ivan Kupala"; the film of Yurii Ilienko  "Night on Ivan Kupala"; the Folk Opera of Y. Sankovych  "When the fern blooms." The latter during  40 years was banned and only in 2017 its world premiere took place on the stage of the Lviv Opera. 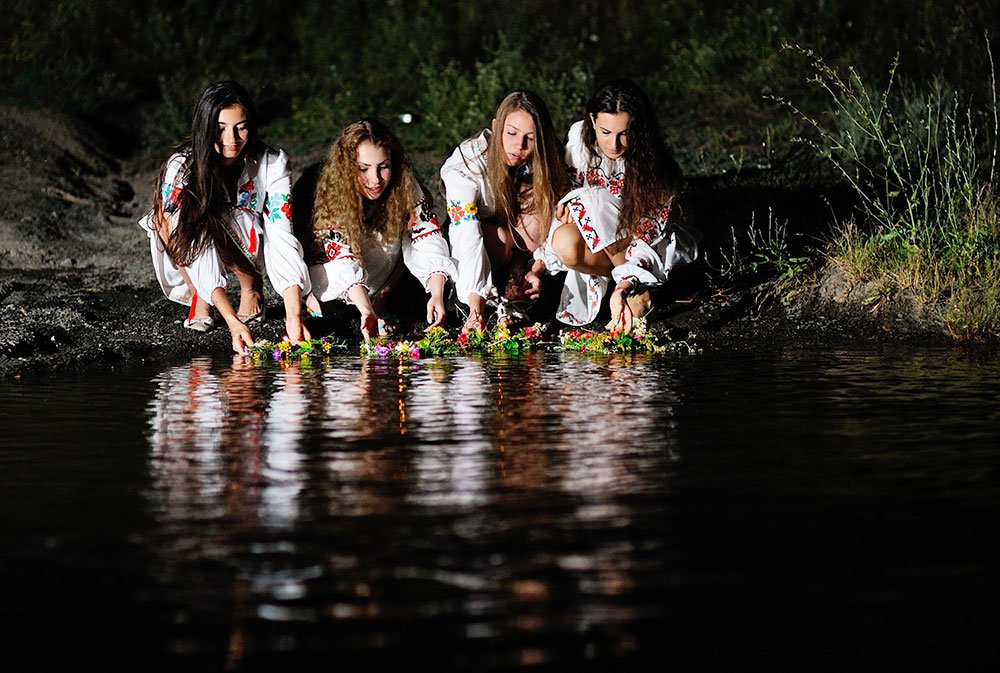 Letting wreaths float on the water 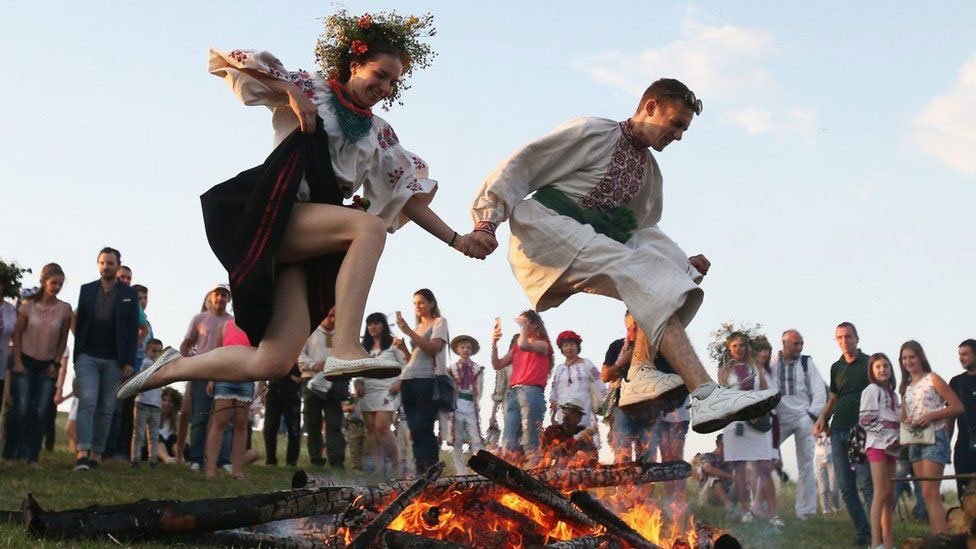 Jumping over the bonfire
UNIAN

At the beginning of the XX century Kupala rite gradually began to disappear. Today it exists in the "revived", or rather "introduced" in Soviet times (during the anti-religious struggle) form of staged ceremony. And although the magical meaning of rituals was leveled, and the celebration gained artistic value, yet the main pagan ritual actions have reached us - weaving of wreaths by girls and letting them into the water; honoring Kupala tree with dances; kindling the fire and jumping over the fire; ritual bathing; burning or sinking of trees; the burning of sacks of straw or stuffed  dolls; the ceremonial dinner. It is interesting that the name of the holiday, and the ritual fire, and decorated tree are called "Kupalo", "Kupailo" or "Kupailytsia". These are also the main elements of the rituals, which are based on the cult of fire, water and vegetation. Rituals symbolize the union of male (fire) and feminine (water) elements, were carried out with the aim of ensuring productivity, health, procreation. 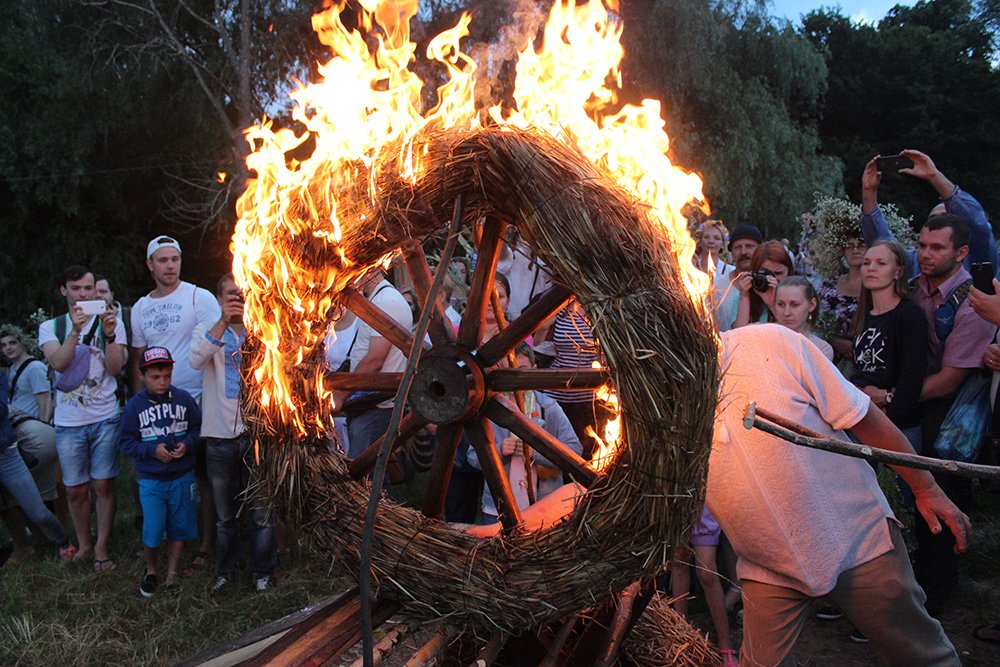 Kupala burning wheel at the “Spivoche pole” festival, Pyrohiv village near Kyiv.
The National Museum of Folk Architecture and Life of Ukraine 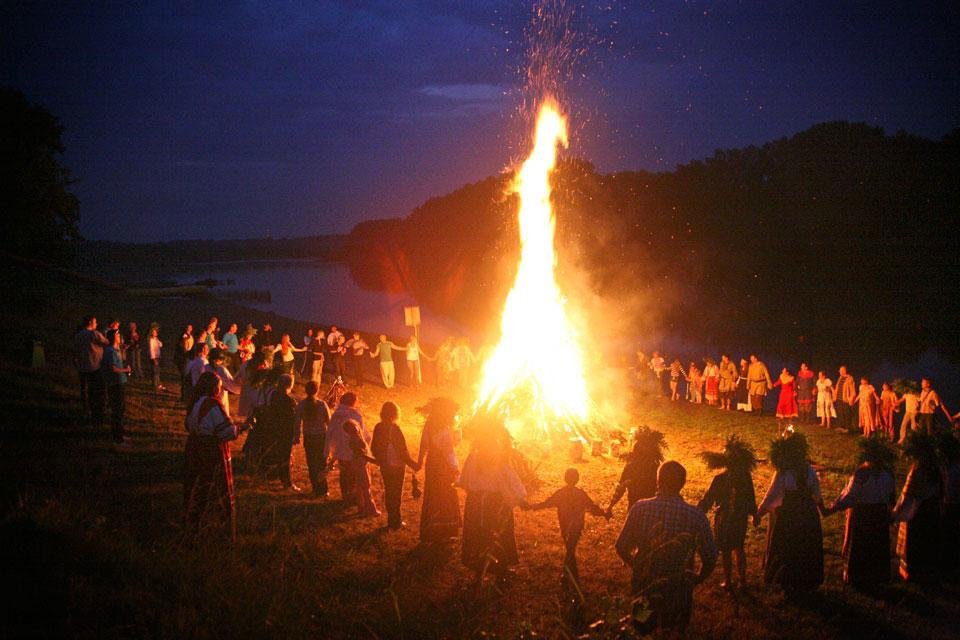 The ritual bonfire on the feast of Ivan Kupala is connected with the cult of the sun, so the place for it was chosen, as a rule, on the hills to raise the flame as high as possible. Also people rolled burning wheels, wrapped in straw from the top of the mountains. For the fire, people collected all the trash straw, old clothes, wheels. With all this, the "impure force" had to be burnt. Everyone present had to bring something to the fire, otherwise this person could be beaten there: "Those who come  without  a log, they will come back  without a knee." The Kupala fire was set, as a rule, by a woman or a girl as endowed with the function of childbirth, and the fire had a fertilizing power. Therefore, to be able to continue the race, all the girls and young women had necessarily to be at the festival. The most important ritual on this day is "purification" by fire. People did not sleep the whole night, danced around the fire. The boys and girls, holding hands, jumped over the fire. Sometimes the cattle were driven home through the Kupala fires to protect the animals from disease. People could burn in the fire the shirt of a sick child, to make the kid feel  better. The branch that was burnt in the fire "Kupalo  branch" was  a sacrifice to the main god-the sun.

«On Kupala night a swallow bathed» 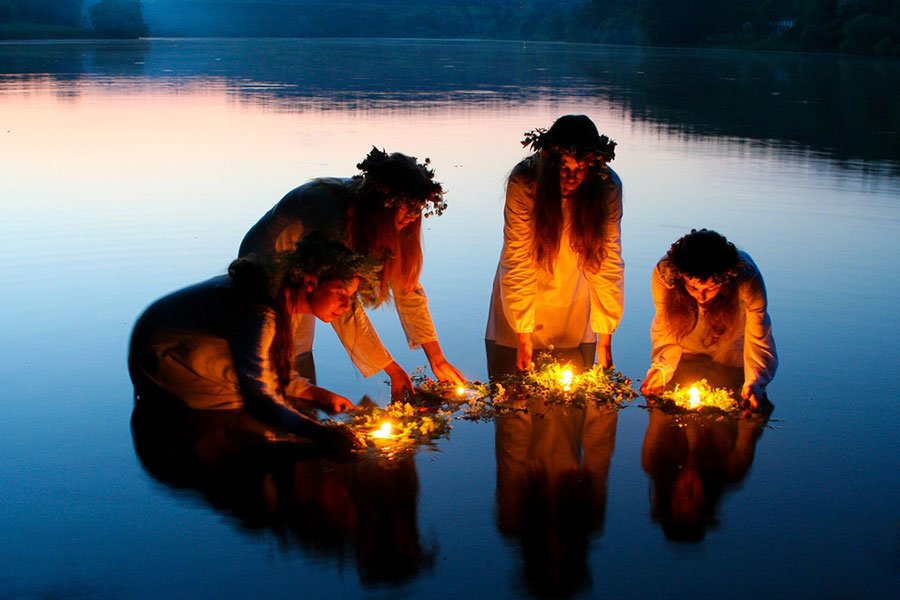 Like fire, water also had the power of "purification", "recovery". So on this day, bathing was a ritual and it was  known to all the peoples of Europe. People had  a common belief in the healing properties of the Kupala dew, people washed faces with it. Girls put wreaths in water, wondering about their fate. Then the girls undressed themselves and bathed to "clean up". The ritual of drowning the Kupala tree, Marena and Ivan is a simulation of the old sacrifices to the water. According to popular belief, the water on the day of Ivan Kupala demanded sacrifices and was considered dangerous. Therefore, the human sacrifice was replaced by its symbolic image – the Kupala tree.

«I am sitting on the willow, and I am calling for the girls to Kupalo feast» 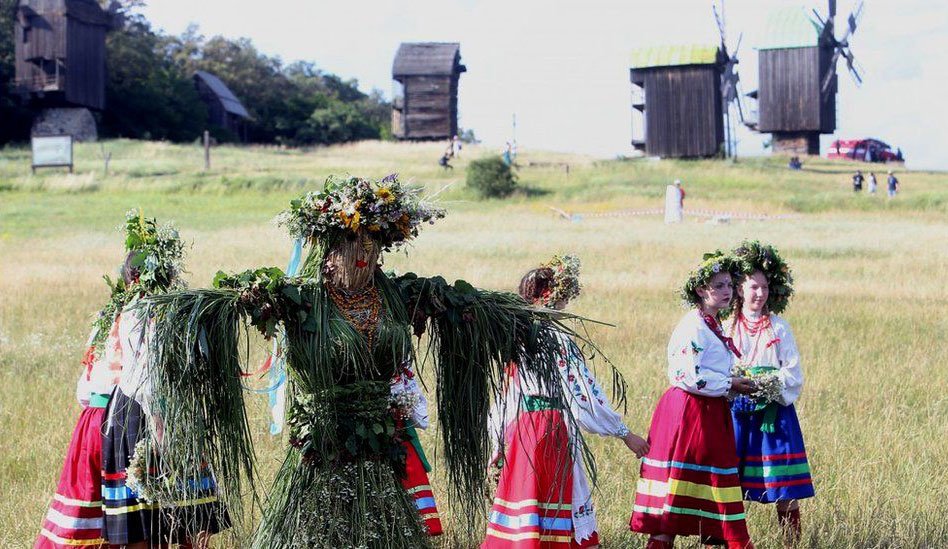 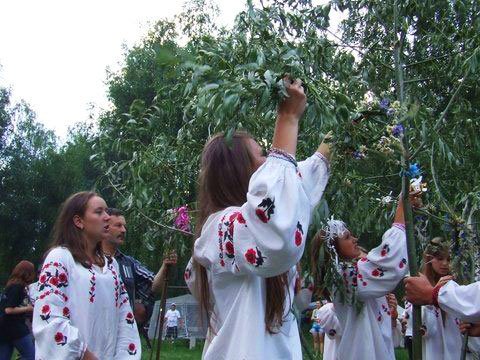 Ornament of a willow with field flowers
vn.20minut.ua

It was a special day for honoring the plants. The fern was considered to be the main Kupala grass, brave people went to look for the mysterious flower  in the forest on the night of Kupala. Whoever found  it would  be healthy and rich. There was also a custom to collect medicinal plants on Kupala; to decorate houses with herbs, ferns, burdocks; to make "Kupalo"/"branch" – a festive tree (most often from a willow). By the  meaning it is similar to the wedding "branch” because in ancient times it was Kupalo which  marked the beginning of the mating season. There is a legend that this night the wedding of Kupala and Marena was celebrated  as a symbol of a combination of two elements – water and fire, male and female. "Kupalo-branch" was  decorated  by girls with bouquets of wild and garden flowers, berries, candies, bagels, colorful ribbons, the top was fixed with a wreath of periwinkle, sometimes flower of nettles and thistles, to make it difficult for the guys to break it. The  figures of "Ivans" and "Marenad" were also made of the willow, in the evening they were brought  to sink  or burn – so people  sacrificed to the god of the sun and the god of water, to have a rich harvest. And today women put  the  branches of the broken "Kupalo" all through the garden for a good harvest.

This page uses materials and photographs from the Fund of the Educational and Scientific Laboratory of Podillia Ethnology at the Department of History and Culture of Ukraine of the Mykhailo Kotsiubynskyi State Pedagogical University of Vinnytsia, the National Museum of Folk Architecture and Life of Ukraine, the Vinnytsia Regional Center for Folk Art and the Website http://www.kivertsi.in.ua/about_us/