Cossack songs of the Nyzhnie Podniprovia

The Ukrainian special social phenomenon of Cossacks was formed on the territory of modern Central and Southern Ukraine at the turn of the XV-XVI century. 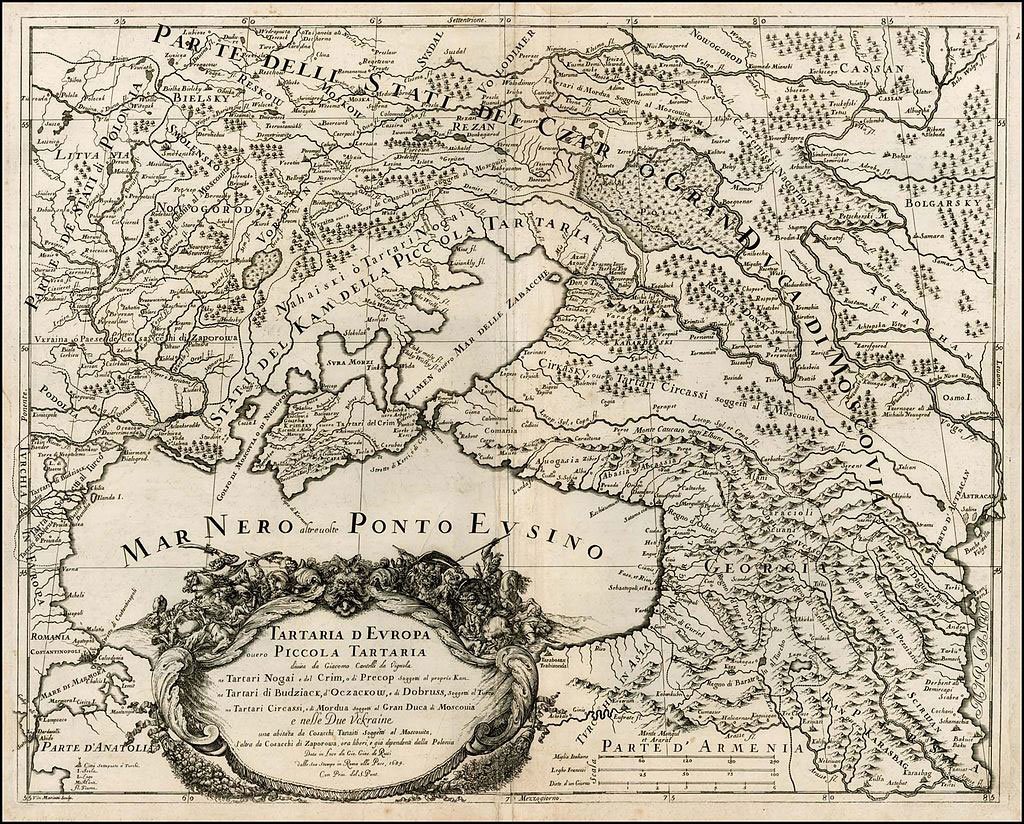 Italian map of "European Tataria" of 1684

Semi-military settlements of Cossacks appeared on the border of the Velykyi Step and the Grand Duchy of Lithuania. At that time there the settlement of modern Dnipropetrovsk region took place, and this area can be called the Cossack region. From 1581 to 1775, five Zaporizhzhya Sichs were located on the territory of the Lower Dnipro region. Cossack songs that existed in this area were brought to other parts of Ukraine, where they acquired other features and character.

A new genre cycle in lyrics, epic and drama began to be formed in the Cossack environment. At that time the tradition of performing Dumas appeared, as well as the institute of kobzars, the tradition of male polyphonic singing was developed. After the decline of the Cossacks as an influential social layer on the territory of the Podniprovia artistic forms that were adherent to Cossack songs were inherited by the descendants of the Cossacks.

The song "Oh, where the way-road leads", the village of Pidhorodne of the Dnipropetrovsk region

In the Dnipropetrovsk region in oral traditions up to our times different variants of the Cossack songs are preserved. According to subject matter and style of performance they are divided into several groups. In particular, Cossack songs are those songs in which the historical background of the Cossack era is covered, Cossack campaigns and battles are described, as well as the destruction of Ukraine by enemies (for example, “Oh guk, mother, guk”. There are songs in which the life of individual personalities and generals is poeticized (about the Cossack Nechai "Oh, from behind the mountain and from behind the estuary" from Zhovty Vody, "Song about Morozenko").

Performance at the Festival “Zhnyva”, 2014

The largest group of Cossack songs depicts Cossack life. They tell about the various details of the life of a warrior, provide reflections on the fate and difficult life choices, glorified Cossacks’ death. The Cossack's constant companion in songs is his faithful horse:

There are also Cossack lyrical songs that speak about love between a Cossack and a girl ("From behind  the mountains, from behind  the mountains") and of the Cossack ballads ("A Cossack was coming from Don"). In these songs, the text comes either from an indefinite narrator or from the Cossack himself. In songs depicting the relationship between a Cossack and a girl, the text usually comes from a girl, but their musical language is identical to the songs of the first group (except for the Cossack romance) (for example, "Garden-garden, wheat field" from Mezhova, Mezhivsky district). 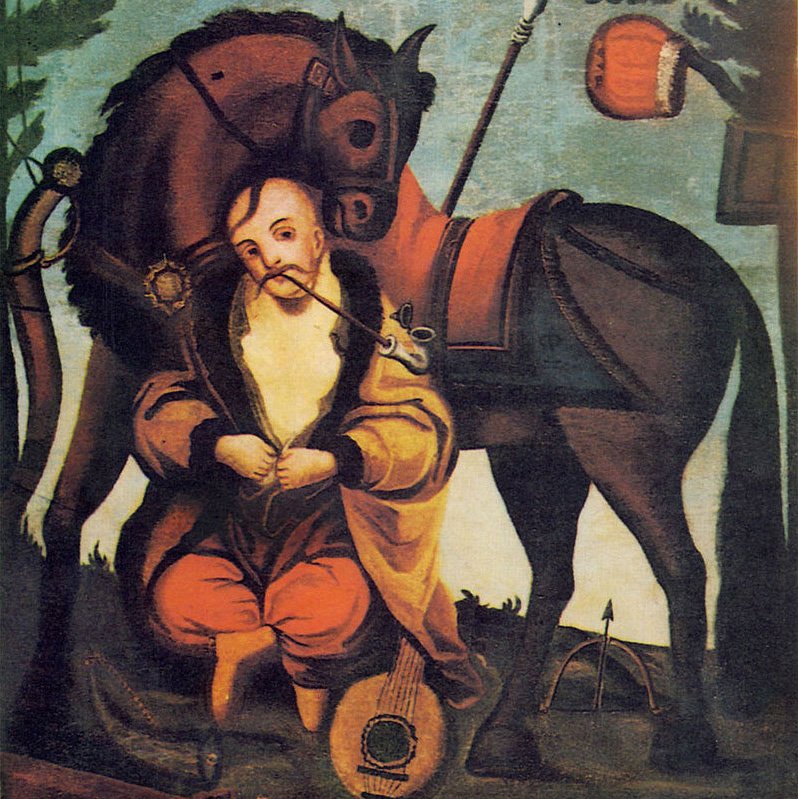 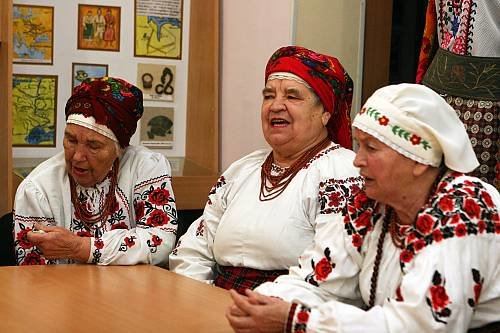 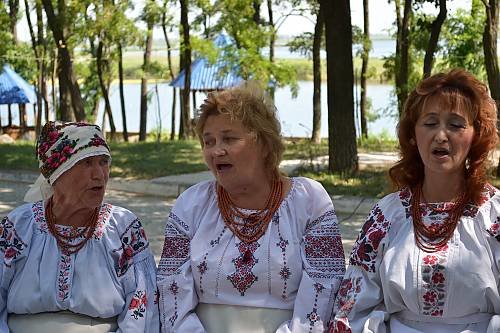 Cossacks as a separate class has not survived so far, so the affiliation of a song to the Cossack is determined by such features as text and musical language.

Due to the length of each musical phrase (folk singers from the village of Kapulivka, Nikopol district call this type of song фі "protracted"), the noticeable duration of each musical fragment (even individual sounds) is often "lost" in the melodic chants of individual syllables. An artistic technique occurs that combines the under-singing of individual words with the simultaneous beginning of another musical phrase. During the performance of songs, the performers are characterized by a self-absorbed, focused state, close to prayer or meditation.

Traditionally, in  Cossack songs solo chants are performed in a high voice. The choral part of the song usually has a three-voice basis. They are performed, as a rule, without instrumental musical accompaniment by a group of performers ("together"), mainly by women or women and men together.

The solo upper voice is characteristic for the structure of the group Cossack song. Folk performers name these functions respectively with the verbs "wind" and "bring" ("pull"). Under the influence of folk choirs, the upper voice can be performed by a group of people (as, for example, in the folk ensemble "Discovery" from Zhovti Vody). This leads to a simplification of the melody of the upper voice, as well as the loss of performing personality.

The group part of the song usually has a three-part structure (solo upper voice, group middle and lower voices). In the village of Boguslav in Pavlograd district, in some songs women add the fourth, lowest voice, which, in fact, is an imitation of the men's party (called "basity").
Cossack songs are usually performed with a loud saturated sound with its formation in the chest, and the manner of performance is common to both men and women.

As a rule, Cossack songs have a large number of verses, making their performance  a real story - clear and detailed  in content. Often there are no choruses, which is generally a peculiarity of the  lyrical-epic style.

Now the first style is common and the second one almost entirely fell along with the tradition of solo performance works. 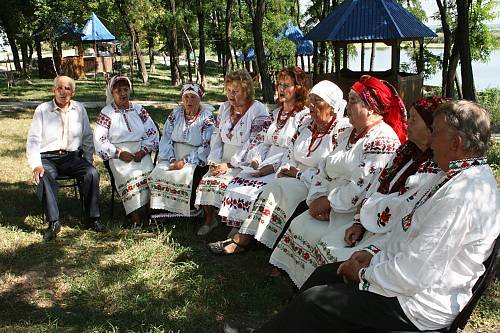 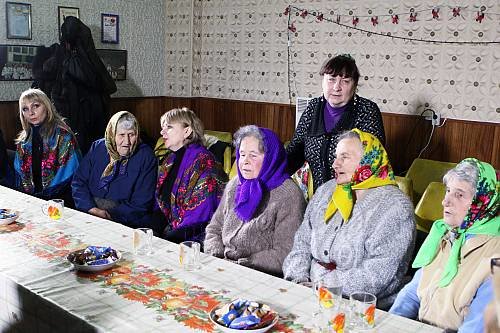 Singing tradition of the Cossack region has come down to us in oral form. Transmission and memorization of texts and melodies of Cossack songs occurs, as a rule, during the performance of works. 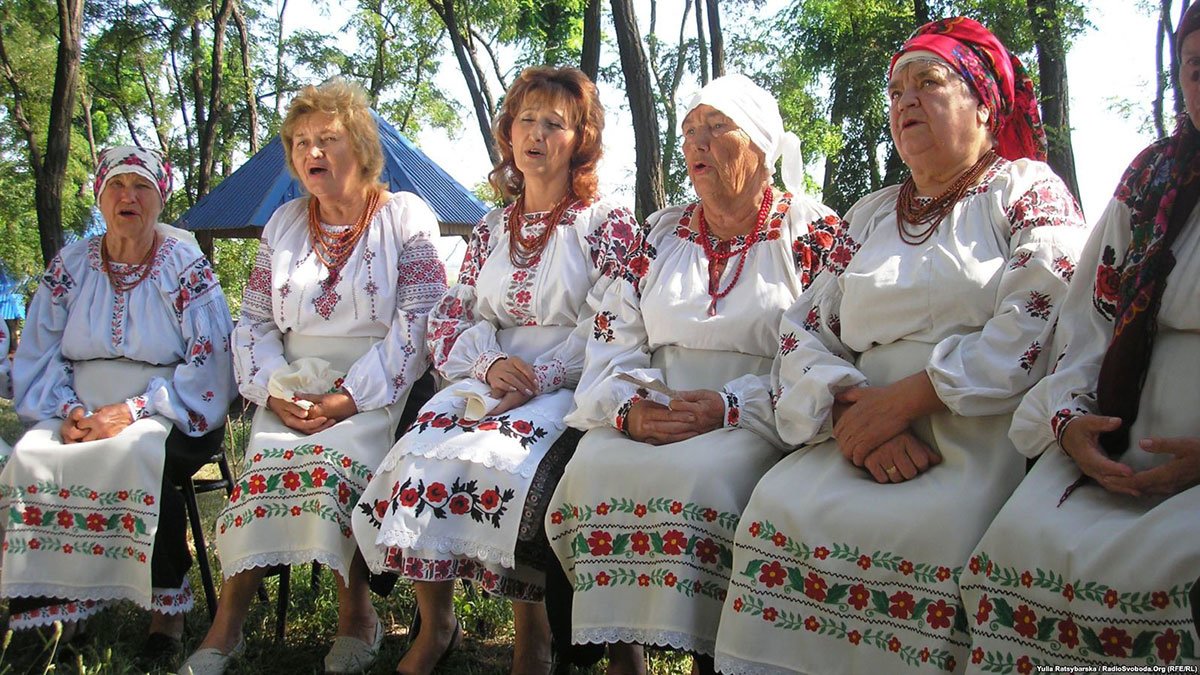 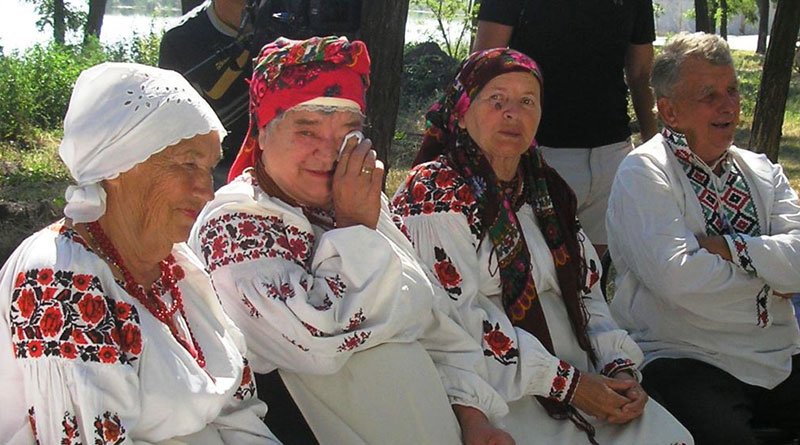 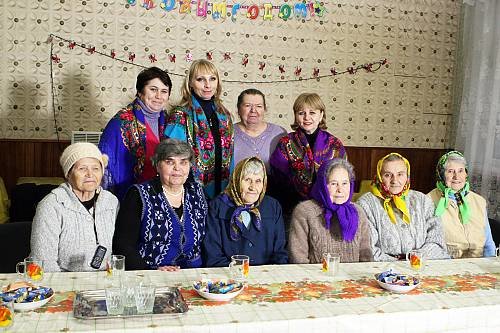 At the beginning of the 2000s, the performance of Cossack songs was recorded in many villages of the region. However, the elderly age of folklore performers and the lack of effective mechanisms of knowledge transfer between different generations caused the decline of the song tradition. However, researchers in 2014 recorded the performance of Cossack songs in the villages and towns of the Dnipropetrovsk region (Kapulivka village, Nikopol district; Boguslav village, Pavlograd district; Krasny Pid village and Novokurske village, Shirokiv district; Mezhova town, Mezhivsky district; Zhovti Vody town, Pidhorodne town, Sursko-Mykhailivka village, Solonyansky district). Work on recording and research of Cossack folklore continued in the following years (2015-2017), which allowed to confirm the old and identify new centers of existence of Cossack songs.

Singers of Cossack songs of Dnipropetrovsk region are not a part of a single community. In some places they form folk amateur groups, such as in Zhovti Vody (ensemble "Znahidka"), in Pidgorodne town, Dnipropetrovsk district (ensemble "Krynytsia"), in Boguslav village, Pavlograd district (ensemble "Boguslavochka"). Elsewhere, the performers are individuals who are not a part of an artistic group (for example, Anna Mykhailivna Dolzhanska, born in 1918 in the  Mezhova village, Mezhyiv district; Kateryna Hryhorivna Skyba, born in 1929 in the  Krasnyi Pid village, Shirokivskyi district), or informal groups that gather occasionally (on the weekend, holiday, just to sing near the house) (for example, such group in the  Kapulivka village, Nikopol district consists of Fedorenko Nadiya Semenivna, born in 1927, Ivanchura Maria Kindrativna, born in 1934, Bilyaeva Olga Grigorivna, born in 1930). The singers of Cossack songs are mostly elderly people.

Today performers of Cossack songs are, as a rule, folk groups, such as ensembles and bands "Krynytsia", "Pervotsvit", "Bohuslavochka" etc. In some villages, the carriers of the song tradition are individual performers or informal bands that gather from time to time on big holidays. In 2015, the element "Cossack songs of Dnipropetrovsk region" was included in the national list of elements of intangible cultural heritage, and in 2016 - in the UNESCO List of World Intangible Cultural Heritage.