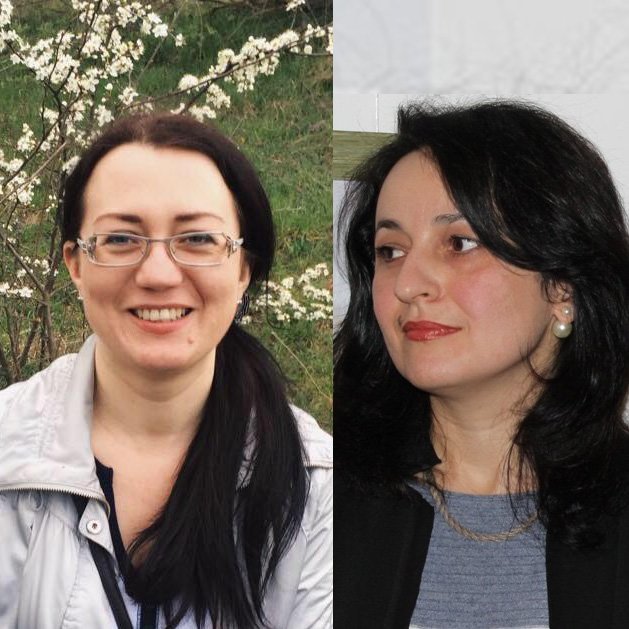 O. Yasinska, head of the “Museum of Pysanka painting” - a branch of the National Museum of Folk Art of Hutsul and Pokuttya regions named after J. Kobrynsky.

Pysanky writing is an integral part of the intangible cultural heritage of Hutsuls – an ethnographic group of Ukrainians who have long lived in the Ukrainian Carpathians. 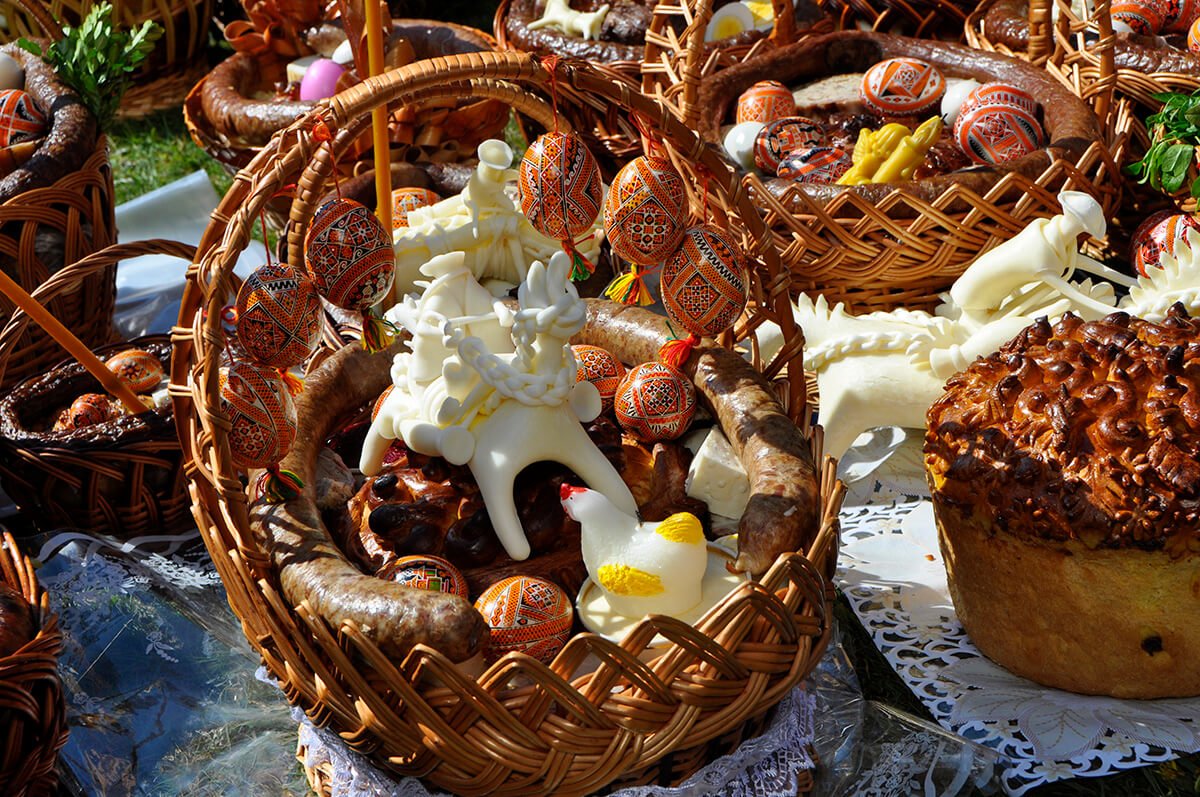 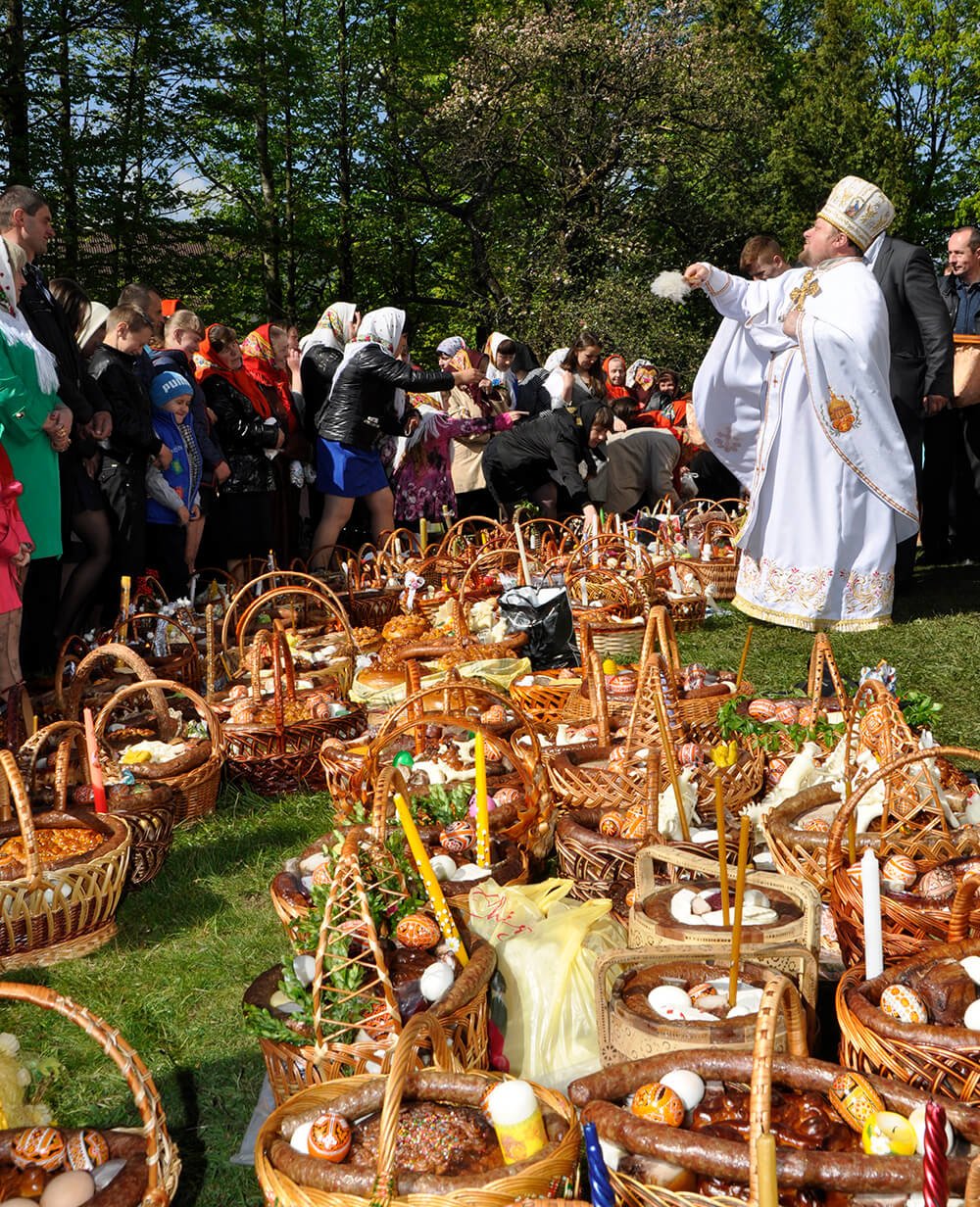 Artistic and ethnographic traditions associated with the writing of pysankas, as well as Easter rites, during which pysanky were used, have been preserved for many centuries in the Hutsul region, which covers the mountainous areas of Ivano-Frankivsk and Chernivtsi regions and Rakhiv district of Zakarpattia region. Each new generation keeps pysanky as an integral symbol of Easter and a mandatory attribute of the Easter basket. In recent years, there has been a tradition of decorating the Easter basket with hollow pysanky, which are attached to the basket’s handle or around the basket itself. There is a preserving tradition of giving pysanky to children who announced on Maundy (or Living) Thursday that Easter would come in three days. For the consecration of the Easter basket, the pysanka was given to the priest, and after the consecration – to the elderly and poor people to pray for the souls of the dead. After returning from the church, the consecrated pysanky are immersed in water with silver coins in it. Some families wash their faces with this water, others touch their faces with pysanky in order to be healthy and rich all year round. There is still a custom when girls give pysanky to boys on Easter Monday. After Easter, on Funeral Saturday, at the graves of relatives, the family gives pysanky and Easter cake to someone present.

Who and how writes pysanky?

Pysanky are written by women and girls (rarely men and boys), before - on the white shell of raw full eggs, now they write on hollow ones. 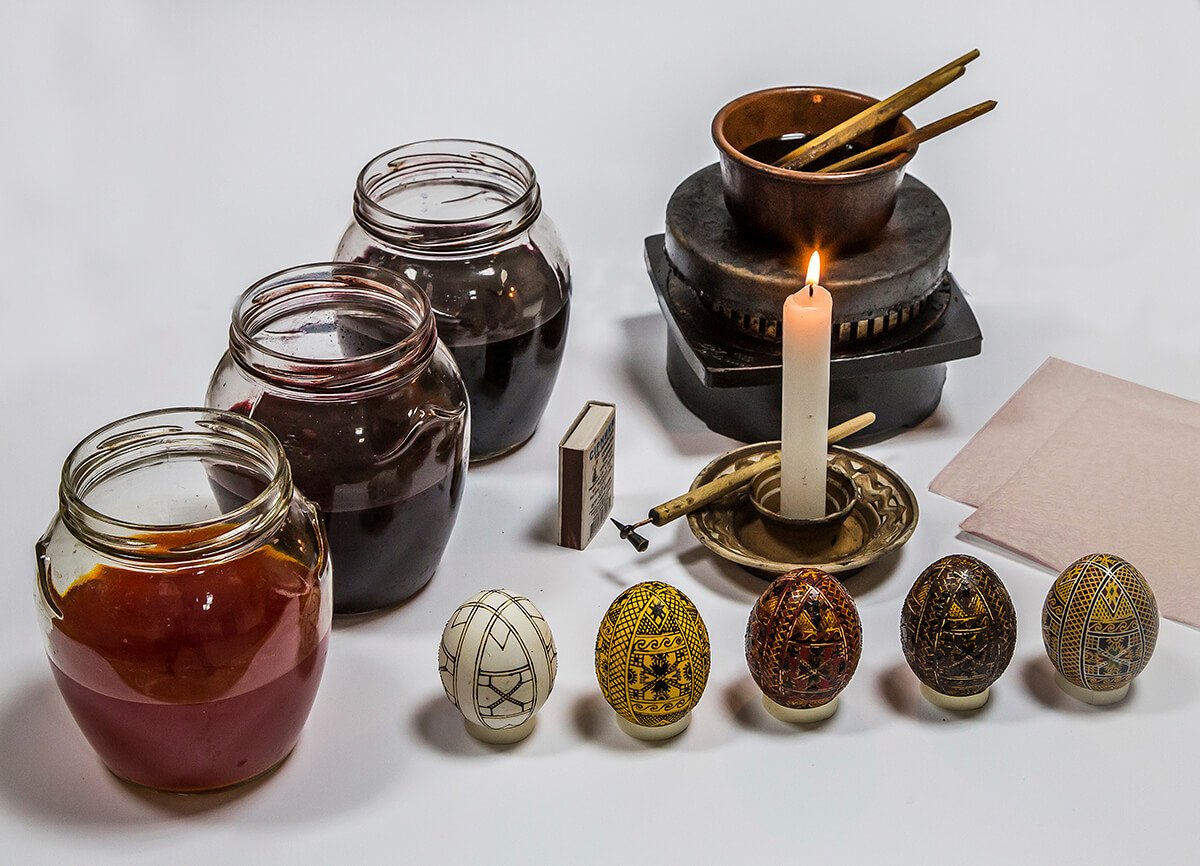 Traditionally, pysanky were written and are written during Lent. Now, pysanky are created as souvenirs throughout the year. To create a pysanka, an egg (chicken, goose, duck, sometimes - ostrich or quail) is used, a “pysachok” - a special pen (consists of a wooden handle and a cone-shaped copper or brass funnel, modern “pysachok” can be electric), beeswax, a stand for heating wax (use a homemade device - a light bulb fixed in a bottle or a bucket with hot ash and a facet), natural dyes or aniline paints, sometimes - food dyes; candles and napkins to remove wax from an egg.

Before painting the surface of the egg is degreased with acetic solution. The ornament is applied with a pen, each time filled with melted hot beeswax, which can be colored with soot to better see the ornament. Elements written on a white surface will remain white, on yellow - yellow, and so on until the darkest color. Each time after painting the eggs in a new color, the fragments of the ornament are waxed, which should be the same color. The sequence of coloring is as follows: yellow, orange, red, cherry, black. Green, blue, purple, pink colors are applied to a white surface, then covered with wax. Wax from pysanky was once removed after heating in the oven, now an oven or candle, or gas flame is used. In the end, a pysanka is wiped with a napkin or hand.

Local features of the tradition of Hutsul region pysanky writing

Each village of Hutsul region has local artistic and stylistic features, colors, options for division into ornamental planes. 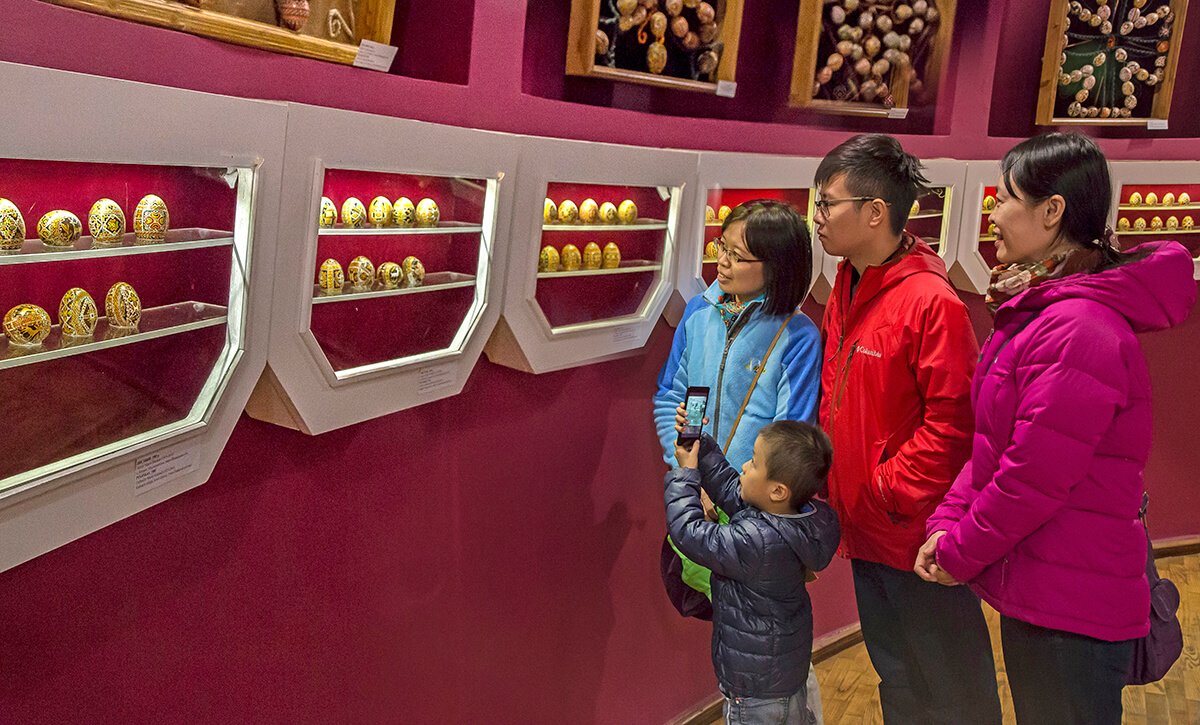 Kosmatsky pysanky in the Museum of pysanka painting exhibition 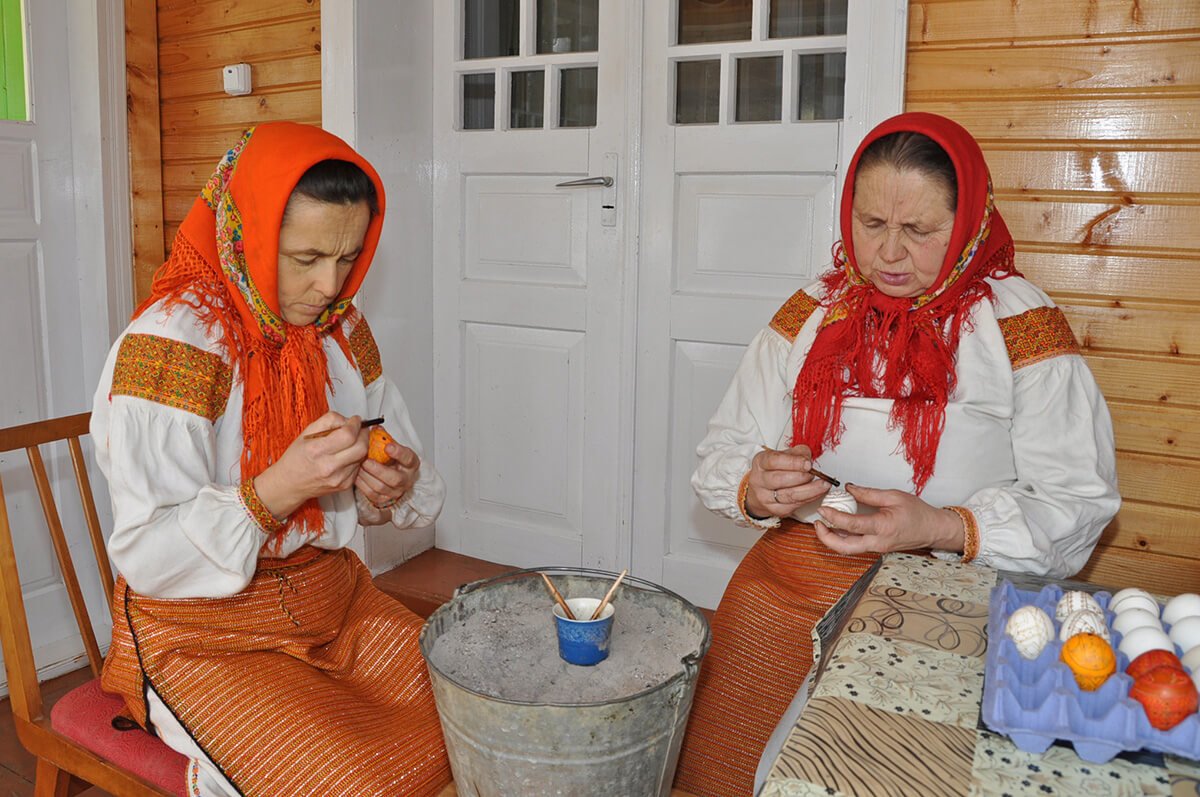 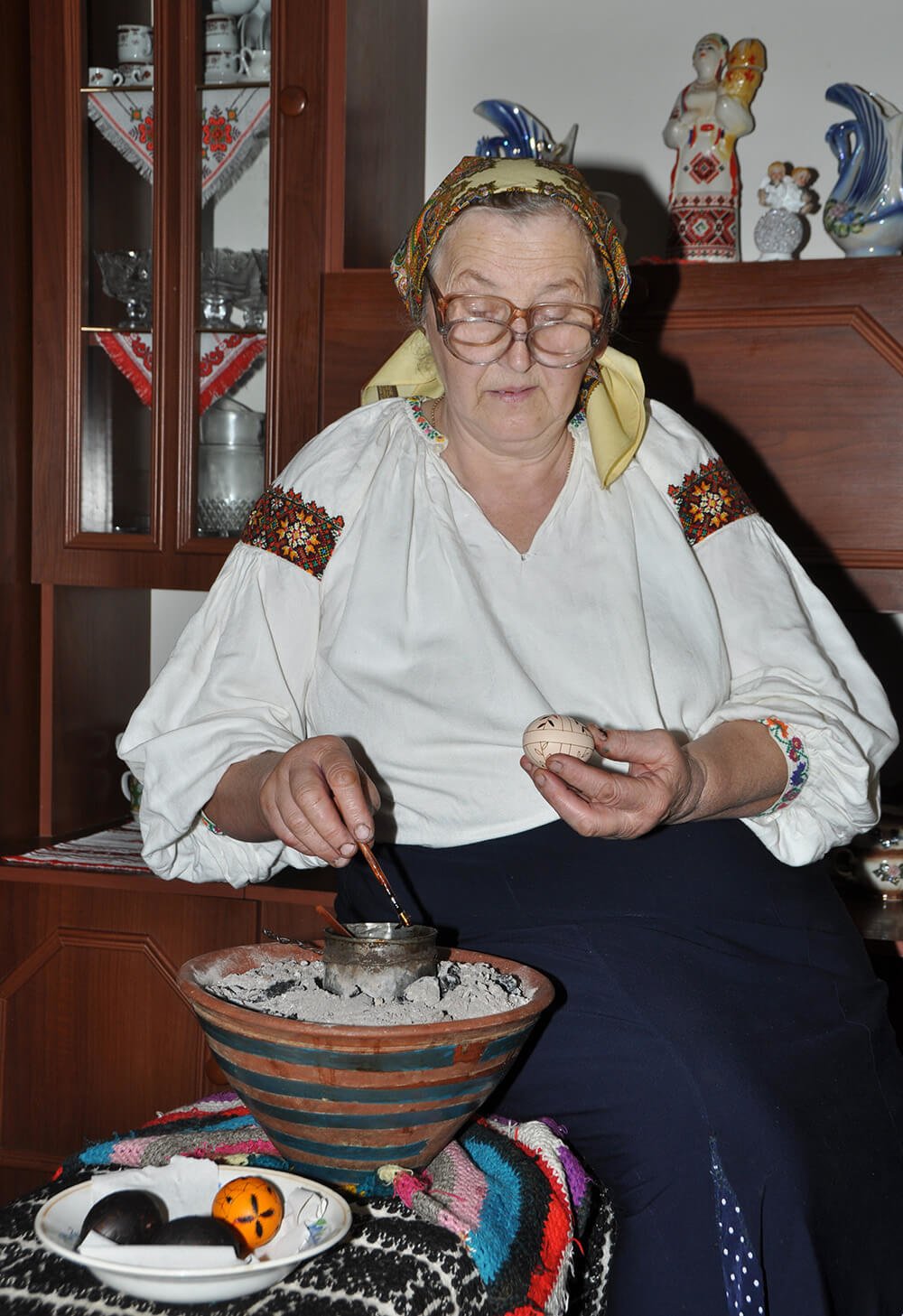 Each village of Hutsul region has local artistic and stylistic features, colors, options for division into ornamental planes. Kosmach's pysanky are distinguished by the highest skill of execution and the smallest painting pattern. The finest lines are obtained here thanks to the pens, the funnel of which has a very small hole. Such pens are made by local craftsmen. The color scheme is dominated by bright yellow-orange, red with a hint of green on a black background. The ornament of Kosmach pysanky often combines a small geometric pattern with images of animalistic and plant motifs. Once only masters of Kosmach pysanky wrote a finely shaded strip on the pysanky, which was called "lattice", "raft" (protection from misfortune). Now such strips are written on pysanky in other villages as well. Many Easter egg motifs ("flying", "river", "plum", "cherry", "fluffy", "princess", "toothy", "cross") are also characteristic of the embroidery of this village. The influence of Kosmach's ornamental compositions and colors can be traced in the pysanky of neighboring villages: Akreshory, ​​Lyuchi, Prokurava, Shepit and Brusturov.

Pysanky of the villages of Verkhovyna district (Bukovets, Krasnoillya, Zamagora, Kryvorivnia, Verkhovyna) are characterized by geometric compositions, less often by plants. Pysanky of Zamagora are distinguished by original plot compositions. The color scheme is dominated by yellow, green, purple colors on a brown or black background, which resonate with the colors of local embroidery.

The original plant-geometric motifs are typical of the village of Chorny Potik, Nadvirna district: "suns" or "flowers", the petals of which resemble hearts, "windmills", "leaves" and so on. The main background of pysanky is black, rarely green. Also masters use pink, blue and purple colors.

Compared to Kosiv region, the pysanky of Vyzhnytsia and Putyl districts of Chernivtsi region are characterized by thicker painting lines and enlarged motifs, as well as predominating geometric compositions of "crosses". The dominant background color is brown or black, the ornament is made of yellow, green, red, sometimes complemented by blue or pink.

Pysanky of Rakhiv region are characterized by geometric ornament, their compositions are stylistically simpler, more concise, and the line of painting is much thicker.

An important role in the transmission of knowledge about the tradition of Hutsul pysanky and its popularization is played by the Museum of pysanky writing, in the collection of which more than 5 thousand pysanky of Hutsul region are stored. 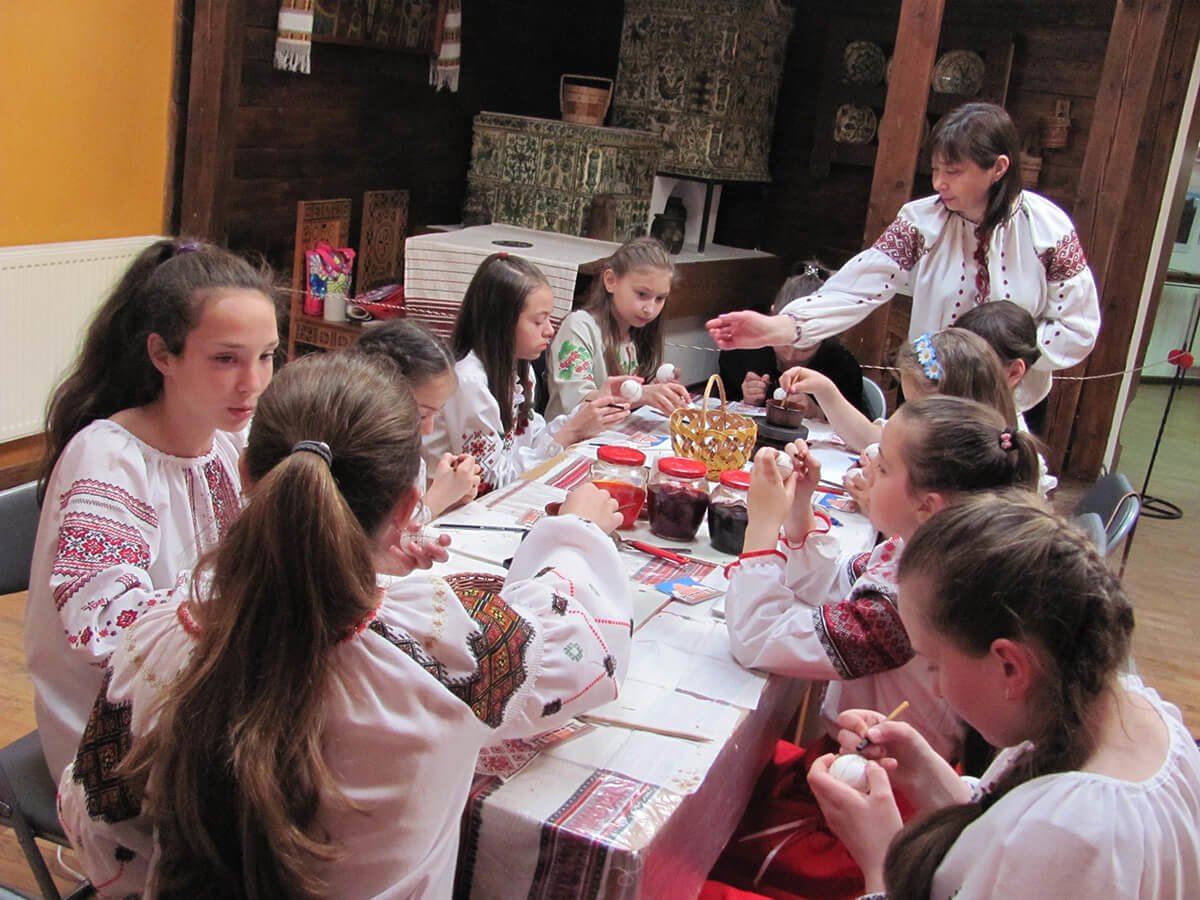 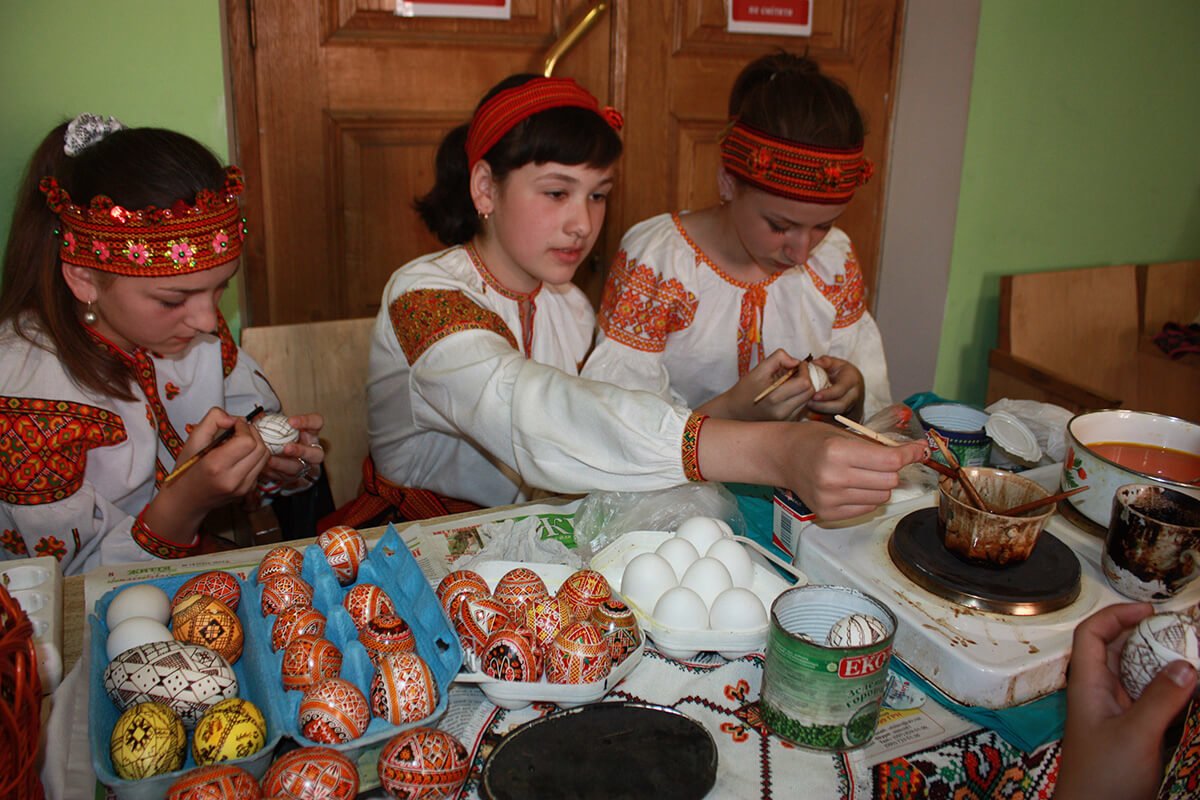 In addition to the permanent exhibition, there are alternating exhibitions from museums and private collections. Close cooperation with international institutions continues. The museum has repeatedly presented Hutsul pysanka at the annual festival "Carpathian Kraslitsa" (Vihorlat Museum in Humenne (Slovakia), in Swidnik (Slovakia), Opole (Poland), Rettingen, Dusseldorf, Lindlari, Cologne (Germany), etc. The museum has a pysanka writing school. During the pre-Easter fairs organized by the museum in Kosmach, Kosovo, Kuty, Beregomet, Kolomyia, you can buy pysanky of modern Hutsul masters. There is an annual all-Ukrainian Pysanka folk Festival that usually includes conferences and scientific roundtables. In these events, in particular, the preservation of Hutsul pysanka traditions are discussed, exhibitions of well-known pysanky masters and competitions for members of the pysanka masters groups are conducted.

Hutsul pysanky writing technique, in particular the pysanky writing from Kosmach, has always had a great importance in preserving the tradition and has a significant impact on the development of pysanky writing not only in Ukraine, but also in the world. It became a stimulus for the work of many famous pysanky masters.