Main page Elements of intangible heritage Tradition of the Procession of Bush rite in the village Svarytsevychi, Dubrovytsky district of Rivne region

Tradition of the Procession of Bush rite in the village Svarytsevychi, Dubrovytsky district of Rivne region 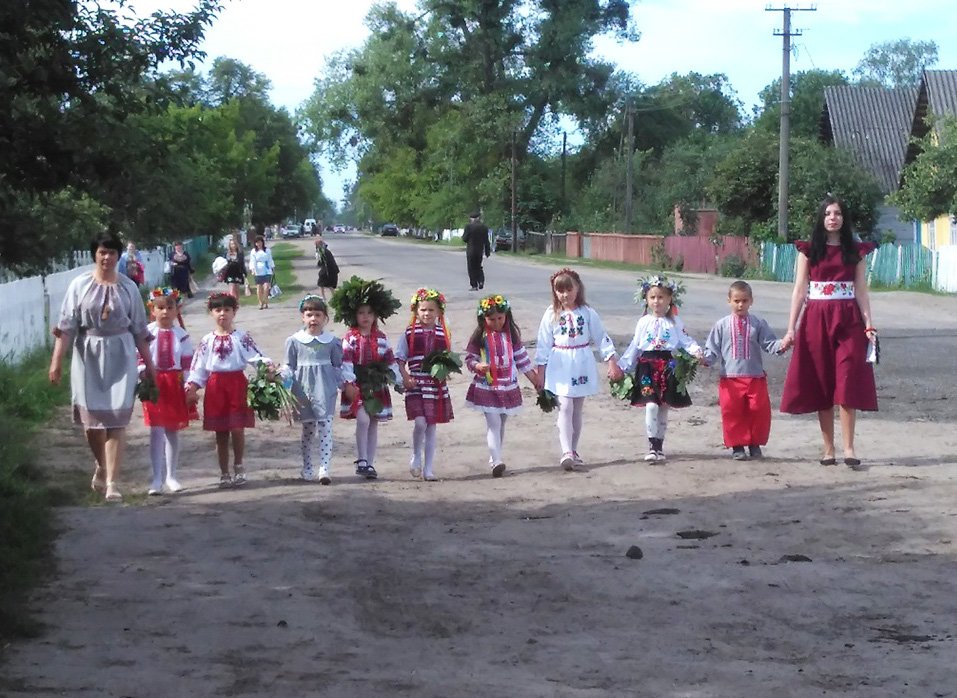 The youngest Bush groups are about to welcome their neighbours, village Svarytsevychi Dubrovytsky district of Rivne region 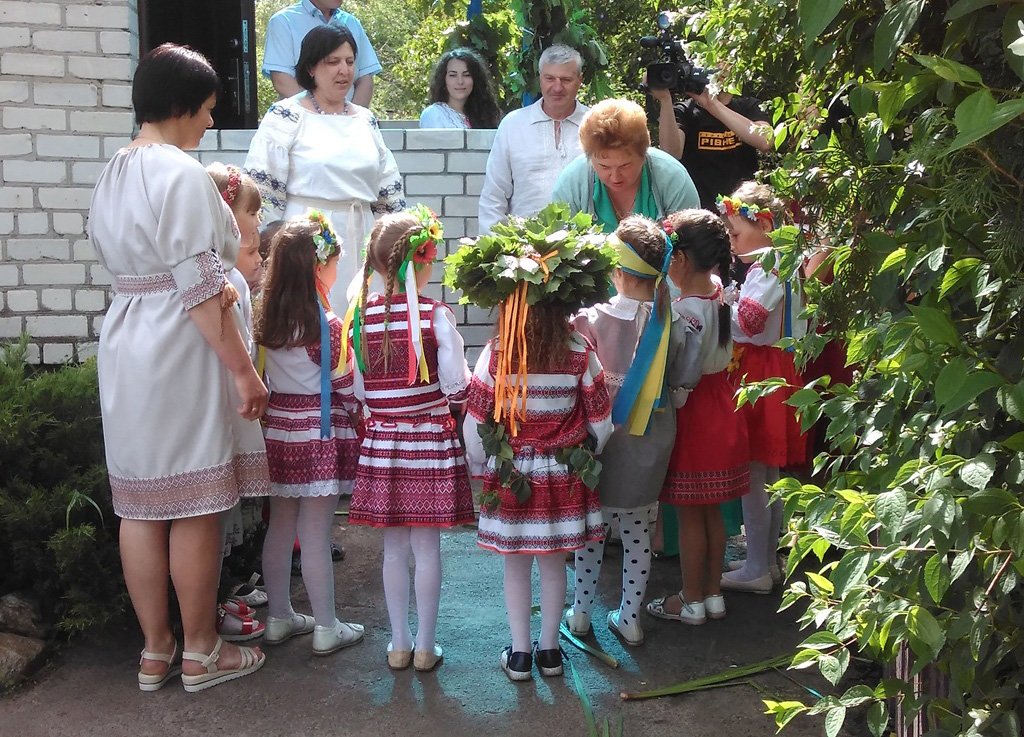 The gifting of the Bush group, village Svarytsevychi, Dubrovytsky district of Rivne region

The history of the Procession of Bush rite (originally called as Vodinnya Kusta) is associated with honoring the cult of ancestors. In ancient times, by analogy with the winter caroling and spring volochebnytsvo and rantsyuvannya, in certain centers women and girls went around the yards to glorify family members. In summer, the action was timed to the solstice. Dressed in branches, the young girl symbolized the Bush that represented the souls of the dead. At the time of the Trinity the souls allegedly had the ability to appear in our world. Ancestors played the role of mediators between this world and the afterlife, and people tried to gift them with the Bush to guarantee themselves a well-being for a whole year. Despite various historical, namely socio-political and religious troubles, the Bush has managed to exist in our time only within the ethnographic area of Pinshchyna.

It extends to the villages of Zarichne and partially Dubrovytsia and Lyubeshiv districts, but the rite is fully replayed as closely as possible to the original only in the village of Svarytsevychi in Dubrovytsky district of Rivne region. 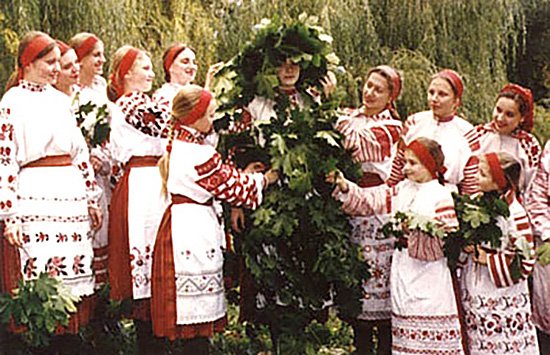 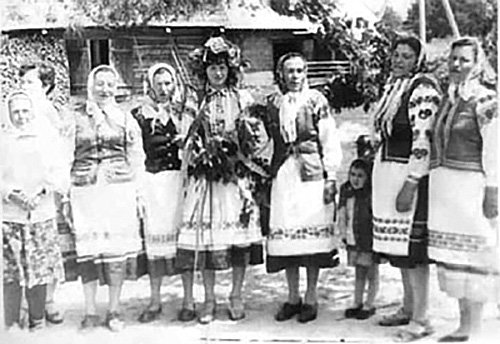 Procession of Bush rite in the village Svarytsevychi, Dubrovytsky district of Rivne region 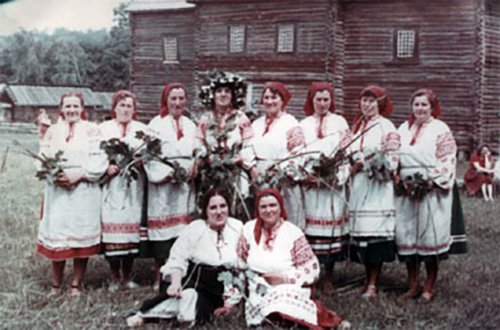 Demonstration of the Procession of Bush rite in Kyiv

The Procession of Bush rite is performed on the 50th day after Easter at the Holy Trinity Day (Pentecost). The ceremony lasts three days and is attended only by young girls (from 5-6 to 16-17 years old), as well as older women who pass their knowledge of traditions to the younger generation (from 20-30 to 60-70 years old). On the first day of the Trinity, the villagers go to the cemetery and decorate it with calamus and maple branches. The cemetery of Svarytsevychi village  is a unique ceremonial monument. Instead of crosses the graves are marked with wooden notches. In many burials, instead of a cross, a stone has been preserved testifying to pagan traditions. Older women call their relatives "for conversation" in the form of a recitative wailing (originally, holosinnya), expressing grief for the dead and telling them about the most important events of the past year.

In the following days they go to the forest and dress up the most beautiful girl in maple, birch and linden branches. The girl is also dressed in festive traditional clothes: a shirt with traditional embroidery, a striped skirt, an apron, a belt. Plants of calamus are plugged behind the belt, and a lush wreath made of maple leaves and flowers is put on the head so that the girl resembles a real bush. The bush group walks around the house and sings majestic bush songs. And at the end it makes a wish: “Come out, master, from a new place. Give the Bush a little bit of gold"," Let's process the Bush so we can await and sing together soon", "Let it rain and let it bloom!". The Procession of Bush rite ends in the field outside the village. The ritual plants are taken away from the Bush girl and are torned to pieces. As a symbol of fertility they are also thrown away "for the harvest." Some remains from the "Bush" are brought home and to the garden.

The new life of an ancient rite 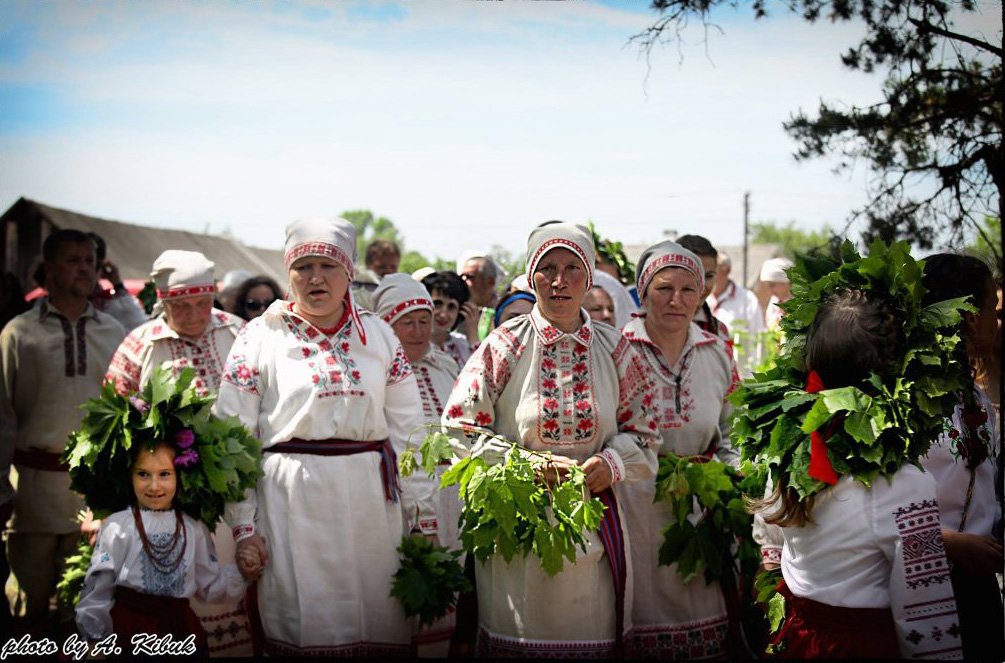 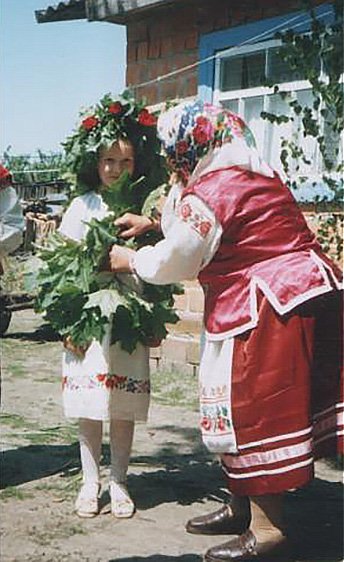 The gifting of the Bush group, village Svarytsevychi, Dubrovytsky district of Rivne region

The festival of folk art "the Procession of Bush" is held in the village Svaritsevychi Dubrovytsia district of Rivne region with the participation of all villagers (about 2000 people) in order to promote and preserve the rite.

The holiday is attended not only by the villagers, but also by guests from different parts of Ukraine and abroad. The Procession of Bush rite" is included in the repertoire of folk groups from the village Svarytsevychi in Dubrovytsia district, village Stari Koni in Zarichne district, village Lyukhcha in Sarny district, Rivne region, folk groups of Kyiv ("Volodar", "Rozhanytsia"), Rivne ("Vesnyanka", "Rankova rosa", "Goryna", "Dzherelo", "Volynyany"), as well as the groups from Zhytomyr region and Belarus. Bush songs in a modern arrangement are present in the repertoire of such singers as Katya Chilly, Illaria, Lviv folk-rock band Joryj Kłoc (composition "Forest"), which promotes interest and acquaintance of young people with the tradition of the ancient rite. Despite the fact that it is included in the repertoire of amateur folk groups, only in the Svarytsevychi village you can feel the life-giving power of tradition.

Once learning about the unique singing of local women, folklore collector Svitlana Kitova was one of the first ones to study the ancient tradition. With the help of experts from the T. Rylsky Institute of Art History, Folklore and Ethnography, she realized that this singing is a part of the ancient Slavic Procession of Bush rite. The researcher has repeatedly informed the public about ritual clothes and bush songs at scientific conferences in Moscow, Kyiv, Lviv and Rivne. In 1980, during a folklore expedition, students of philology at the Rivne Pedagogical Institute (supervised by Candidate of Philology, Associate Professor Lyudmila Bondarenko and Head of the Folklore Department of the Regional Scientific and Methodological Center for Folk Art and Cultural and Educational Work Stepan Shevchuk) recorded bush songs performed by the Chudinovich family.

The information about the Bush rite in the Rivne region was сollected by members of expeditions of the Lviv branch of the T. Rylsky Institute of Art History, Folklore and Ethnography under the supervision of Doctor of Philology R. Kirchiv. The collectors included students of Moscow, Minsk conservatories, Moscow, Minsk, Lviv universities, head of the Polissya sector of the Museum of Folk Architecture and Life of Ukraine L. Orel, as well as the Honored Worker of Culture of Ukraine, Artistic Director of the Ethnocultural Center "Vesnyanka" of the Rivne Palace of Children and Youth Viktor Kovalchuk. The folklorist and writer Vasyl Skurativskyi paid a lot of attention to the village. The observations collected by him were included in a number of publications. Researchers such as Oleksa Voropay, Bohdan Stolyarchuk, Oleksiy Dolya, Raisa Tsapun, Raisa Tyshkevych, Oleksiy Nagornyuk, Yuriy Rybak and others also studied the rite.