Pottery center in the Vinnytsia region 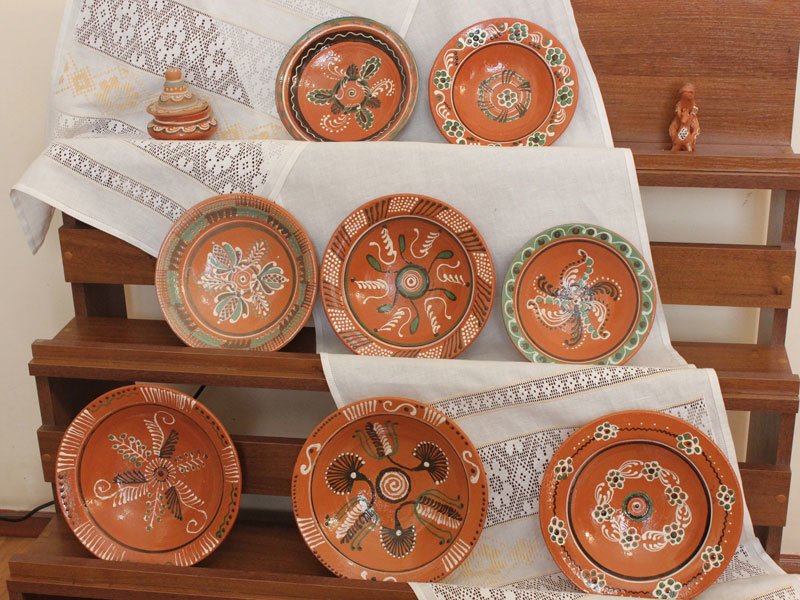 Two neighboring villages of Haysyn district in the Vinnytsia region, Bubnivka and Novoselivka, are well known as pottery centers far beyond Ukraine. Honcharivka, the former name of the village of Novoselivka, certifies the old specialization of the people who lived there. The villages are located on the opposite banks of the left tributary of the Pivdennyi Buh river - Sob River, which flows into the Black Sea.

Here, pottery trade has existed since the 17th century. At the order of Count Stanislav Pototsky, the owner of those lands, about 30 potters were brought to these villages from the town of Uman. The village of Bubnivka is considered to be the historical center of Bubnivka ceramics. Arehta Honchar and his son Semen are believed to be the first Bubnivka artisans. The "father" of Bubniv pottery is considered to be Andriy Honchar (1823-1926), who fled as a young man from the landowner to Haisyn. Andriy mastered the technology of irrigation painting from the local potter Syla Zherdenivskyi. Andriy Honchar's skill impressed the local Bubniv potters with the beauty of the pattern and the overflows of unseen before colors. Consumers also liked the new aesthetics of pottery. The products of Bubnivka potters were sold at village, town and city fairs and thus were distributed in the villages around Haisyn, Tulchyn, Stary Ladyzhyn, Nemyriv, Bratslav, Trostyanets and many other towns and cities of Podillia. 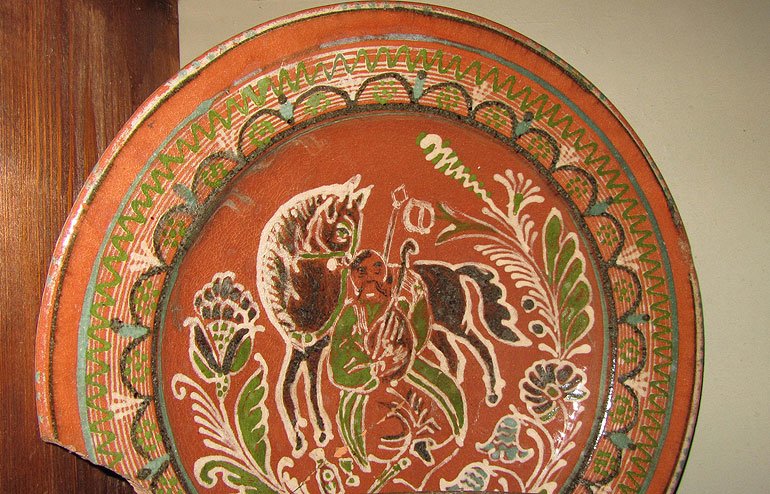 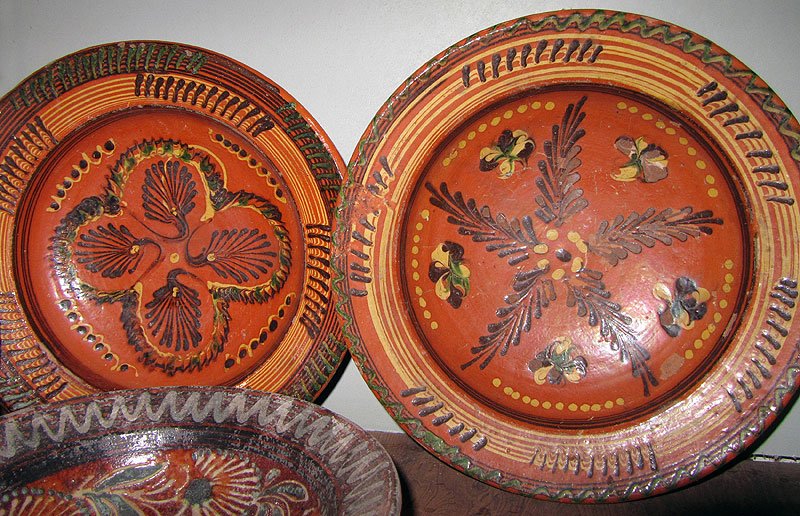 Subsequent generations of masters made their individual influences and innovations in the ornamentation of Bubniv's painting, developing and enriching it. The tradition of the ornamental painting of Bubnivka ceramics has been formed in the middle of 19th century due to the works of such potters as Ahafon Herasymenko and his sons Iakym and Iakiv. People of Bubnivka retell that Agafon, in some steps, made such a dish that a child could fit there. His sons Iakym and Iakiv were the most famous potters in Bubnivka history. They worked all the time together. While one of the brothers was creating the shape of the product on the potter’s wheel, the other painted the ceramics.

The same way of pottery production was typical for other families too. Men made shapes of pottery and women mostly painted.

In 1920s, the pottery center consisted of 28 families. It was then when the pottery reached its prominence there. The transfer of pottery knowledge and skills by Bubniv craftsmen took place at home during the direct production of pottery. The student learned the skill, contemplating the work of the master, and then began to imitate his actions. During the training, the master gave the student advice and demonstrated the techniques of working on a potter's wheel. The success and duration of training depended on the student's abilities and his efforts spent on mastering the skills and techniques of pottery. In the year of 1935, the Herasymenko brothers were invited to Kyiv-Pechersk Lavra, where the creative workshop was founded. In two years, their ceramic products got to the all-Ukrainian exhibition and started to travel around the world, visited Montreal, Moscow, Paris, London and New York.

What was manufactured and the way of painting 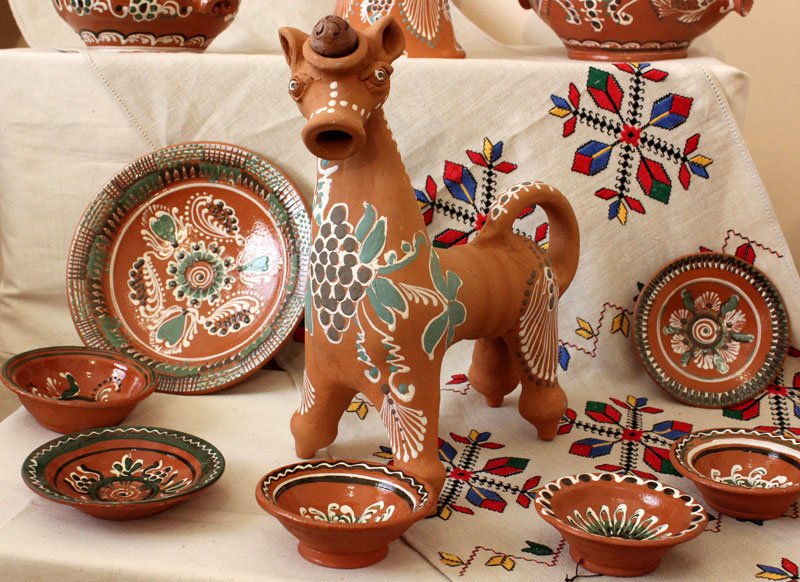 The traditional products of the local potters were pots, pitchers, barrels and large jugs “in case”, bowls; toys such as “baa-lambs”, “horses”, “roosters”, “geese”, “baryshni” (ladies) and “moskali” (soldiers). For Bubnivka ceramics, the figures of animals and birds on the clay-clad lids for various pottery items were typical.

In the engobe technique of Bubnivka ceramics, apart from lines, dots, dashes, “kryvuli” (curved lines), concentric lines and row of dots, there are floral motives (flowers, “sosonka” (pine tree), “hilochka” (twig), “kosytsi” (braids)). Brown glazed Bubnivka bowls and plates, decorated with floral ornaments and grapes, were especially famous. Yellowish ceramics were mainly ornamented with dark green, brown, and white, less frequently blue and grey colors. Fliandrivka and rizhkuvannia techniques were used. Before, a cow horn was used for drawing color on goods, and now a medical syringe is used. Bubniv masters also use auxiliary hand tools, such as a piece of thin wire, which is used to create a "flandering"; chicken or goose feathers to draw a "pigtail" or "flower" and more. The painting itself is made of thorns from a branch of acacia. As a result of creative imagination of the master and a combination of his simplest technical means and receptions, the list has unique and various decorative beauty, refinement and richness of graphic forms.

The workshop on the painting of the Bubnivka plate with Flyandrivka elements held by the craftswoman Tetiana Shpak. The video was shot and edited by Larysa Ratushna Palace of Children and Youth of Vinnytsia. Head of the "Ceramics and Pottery" workshop M. Didenko.

The short video demonstrates the technique of traditional Bubnivka painting in the performance of the Honored Craftswoman of Folk Art Tetiana Shpak (Bubnivka village, Haysyn district). 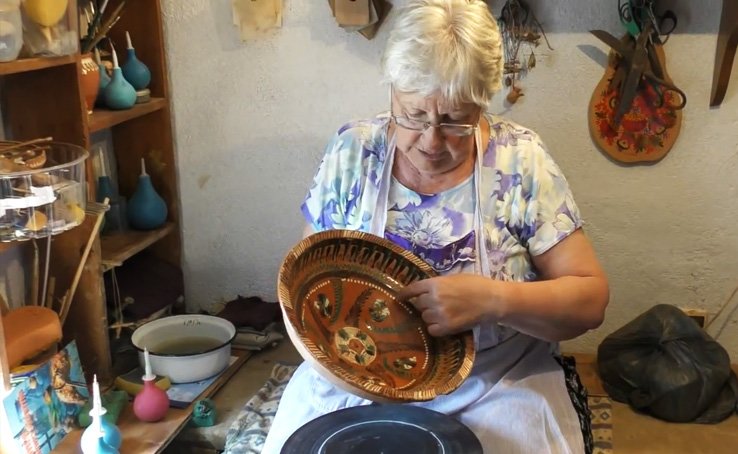 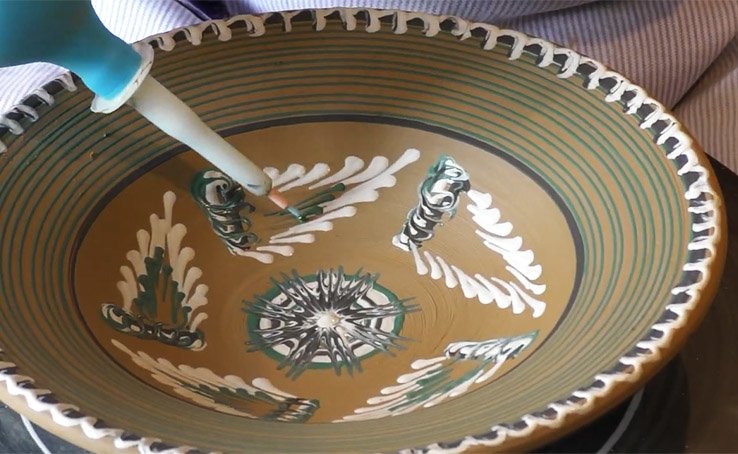 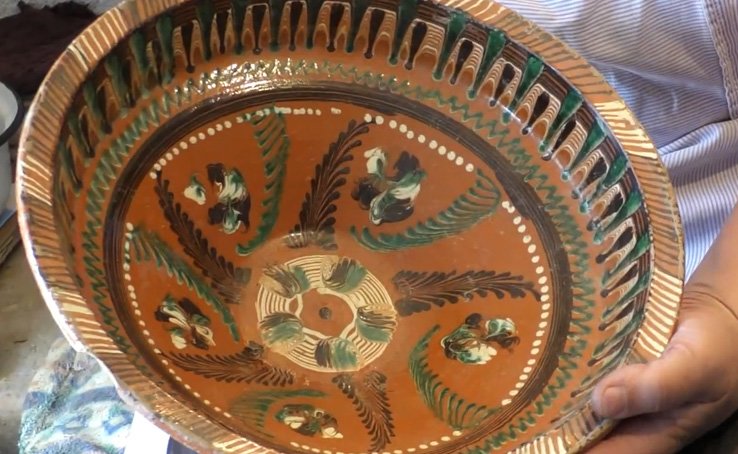 For the development of pottery production in Podillya, as in other regions of Ukraine, an important condition was the availability of raw materials, in particular sludge - a layer of clay with the appropriate structural properties - and fuel. Paints for ceramic painting of bowls, half-bowls and suppliers were made by potters themselves. The painting palette consists of white, black, green and red colors. White is made from kaolin clays of local deposits; red is made from a special clay, which among potters is called "chervin" and is also mined in local deposits; green is made by a special technology from burnt copper; black is made by by a similar technology of burnt iron. Transparent watering in the past was made of burnt lead, now craftsmen use ready-made irrigation of industrial production. To produce paints and bring them to the appropriate consistency, the masters used hand millstones of archaic design. Modern Bubniv masters use ceramic paints and glazes of traditional manual and industrial production. To form a pottery, Bubniv craftsmen use a traditional foot pottery wheel of their own production. In modern conditions, occasionally a potter's wheel with an electric drive is used. The firing of products was traditionally carried out in a self-built pottery kiln (a furnace of a special design with two chambers), but now muffle electric furnaces are more often used. 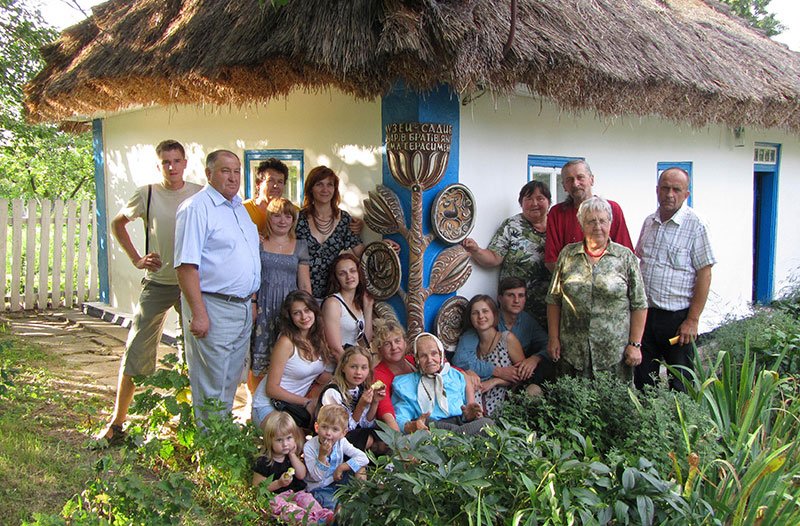 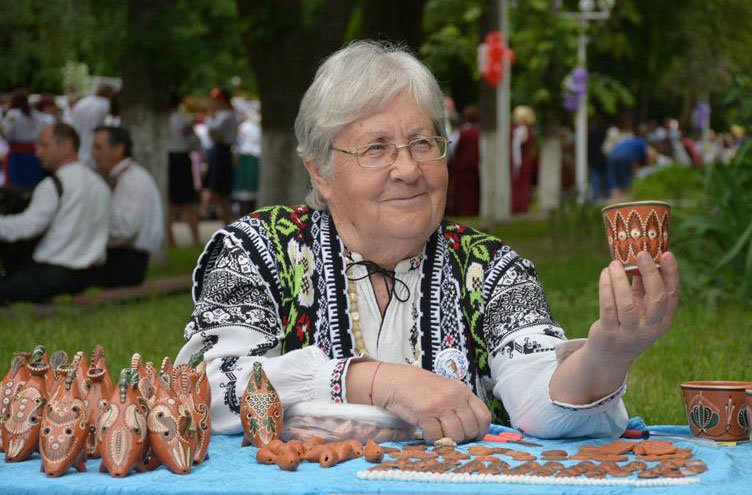 It is possible to enjoy the exposition of Bubnivka ceramics at the regional and all-Ukrainian exhibitions and plein air. You can also visit Museum-estate of the Herasymenko brothers (photos of museum and expositions) in the village of Novoselivka in the Vinnytsia region.

Nowadays, only four women of retirement age are the pillars of the unique tradition of Bubnivka ceramics ornamental paintings. They are honored masters of folk art - Frosyna Mishchenko (born in 1926, the niece of the Herasemenko brothers) (photo of Mishchenko), Tetiana Shpak (born in 1947), Valentyna Zhyvko (born in 1950) and Tetiana Dmytrenko (born in 1957).

Thousands of their products are used in everyday life not in Ukraine only, but in Canada, Czech Republic, Slovakia, Turkey, China, etc. Along with the glory of the master-ceramists, the problem of continuing the tradition of Bubnivka pottery painting by young followers is crucial. Ceramic studios and clubs operate in the village school in Bubnivka, in the school of arts in Tulchyn, in the children and Lyalya Ratushna Cultural Institute in Vinnytsia, children's clubs in the schools of Ladyzhyn, Lityn, and Haisyn and other places, covering primary school children, youth and adults.

Therefore, in May 2018, the tradition of ornamental painting of Bubnivka ceramics was included into the National List of Elements of the Intangible Cultural Heritage of Ukraine, which envisages the implementation of measures for its protection by Vinnytsia Regional Center of Folk Art and Vinnytsia Center of the National Union of Masters of Folk Art of Ukraine.

The art of a single village. Bubnivka ceramics from Novoselivka village, Haysyn district. Interview with the honored craftswomen of folk art Frosyna Mishchenko and Tetiana Shpak. Pottery Workshop by Frosyna Mishchenko. Excursion to the Bubnivka Museum of Pottery.
The video was shot with the support of the Vinnytsia regional center of folk art