The Crimean Tatar decorative pattern Ornek and knowledge about it

From ancient times: the traditions of the ornamental art of the Crimean Tatars

Ornek is a traditional ornament in the applied arts of the Crimean Tatars. This ornament embellished various items of everyday life and worship: clothes, fabrics, jewelry, furniture, architectural objects and tombstones.

Ornek is one of the oldest cultural achievements of the Crimean Tatar people. This unique phenomenon of world culture is connected by its theme and symbolism with the ancient history of Crimea, with all the civilizations that have passed through this land: Scythian, ancient, Byzantine and Turkic civilizations. The decorative art of the Crimean Tatars reached its peak during the Crimean Khanate from the second half of the 15th century till the end of the XVIII century. The ornamental art of the Crimean Tatars originated, went through a long and difficult path of synthesis, received its development and continues to develop.

A system of workshop production was peculiar in the Crimean Khanate. There were workshops of artisans in every big city: weavers, jewelers, embroiderers, furriers, tinsmiths and the like. The Crimean nobility bought high-quality products. The items also found their buyers in other countries. In addition to professional handicraft production, home crafts, such as embroidery and weaving, were widespread. 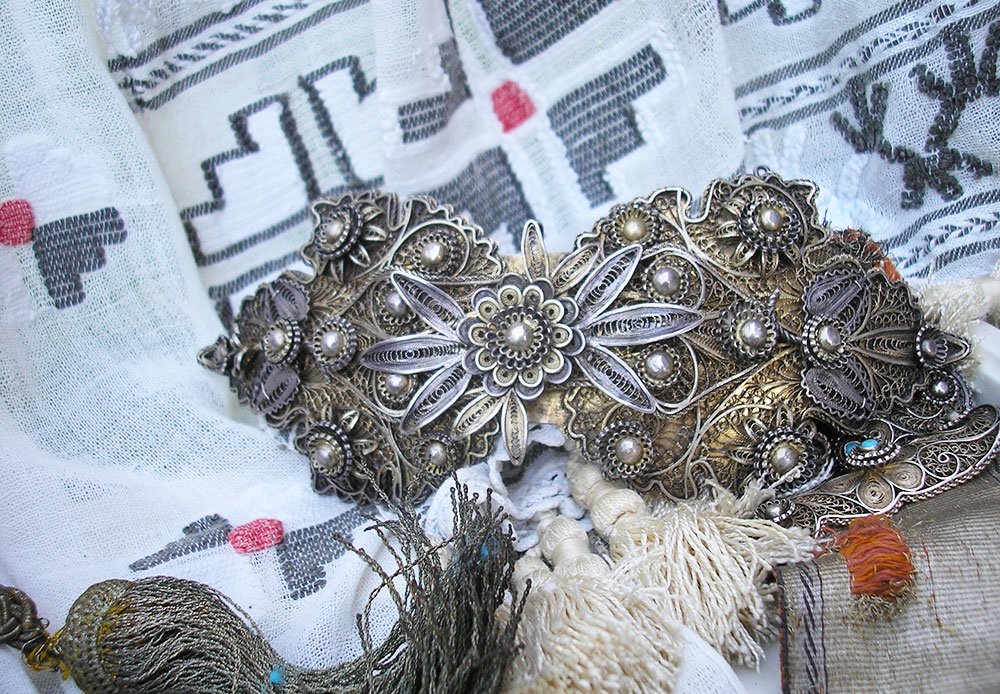 The silver woman's belt and "marama", the cloth to cover the head. Private collection.
Photo by O Soboleva 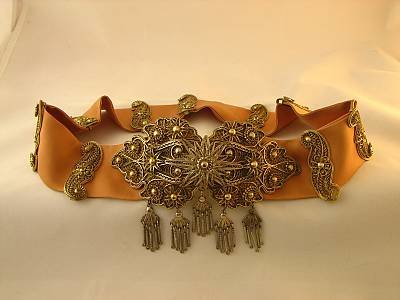 Crimean Tatar ornament and its elements are an important element of self-identification, an integral part of the life of every Crimean Tatar family. For a long time, Crimean Tatars used to decorate the house with decorative and utility items with the image of an ornament. Goods with the image of an ornament have always been the pride of the family, they were carefully stored and inherited. Ornament is a means of transmitting knowledge from generation to generation in the cultural and historical aspects of people's lives, which is why knowledge about Ornek was preserved during the deportation. Objects with the image of an ornament are used at all stages of life: in the rite of birth of a child; in the traditions of courtship and wedding; in the religious ritual of circumcision of boys; new homes; arrangement of the house; funeral rituals.

The true cultural heritage of Ukraine is "Tatar Ishleme", the traditional two-sided embroidery of the Crimean Tatars, which has more than 60 different stitches. A characteristic feature of the "Tatar Ishleme" embroidery is the use of pastel colors in combination with silver and gold threads. This ornament has acquired the geometric shapes in weaving and carpet weaving. Usually, flax, cotton, wool and silk were used for weaving. The linen fabric, produced by the Crimean Tatars, was marked by tenderness and softness. In jewelry, the traditional ornament is of special beauty.

The most widespread technique was filigree, the production of jewelry from thin silver wire.

The interlacing of oriental pattern: the main motifs of Ornek ornament 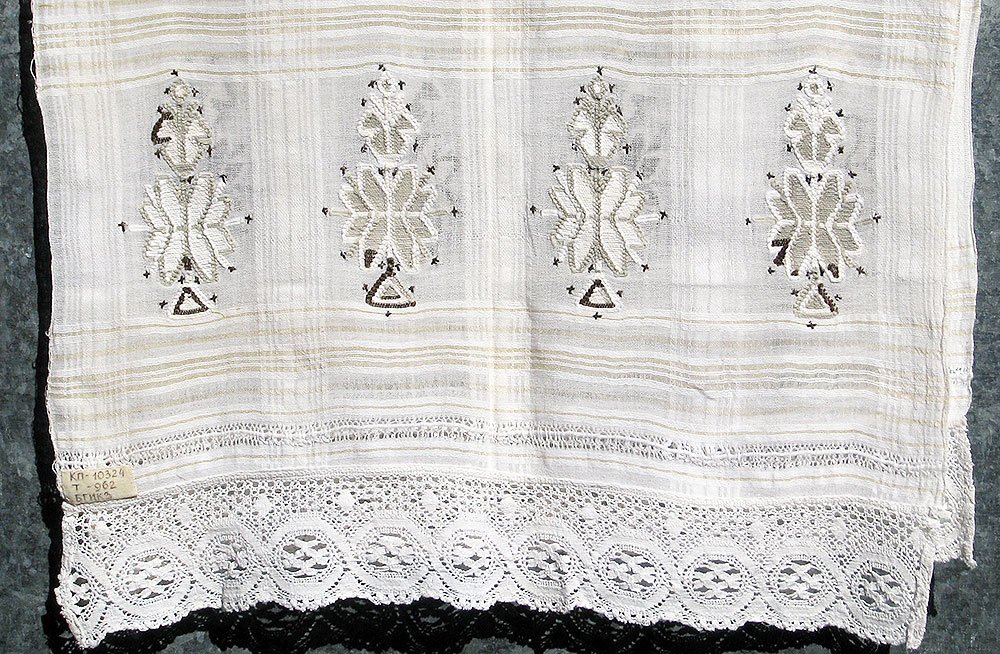 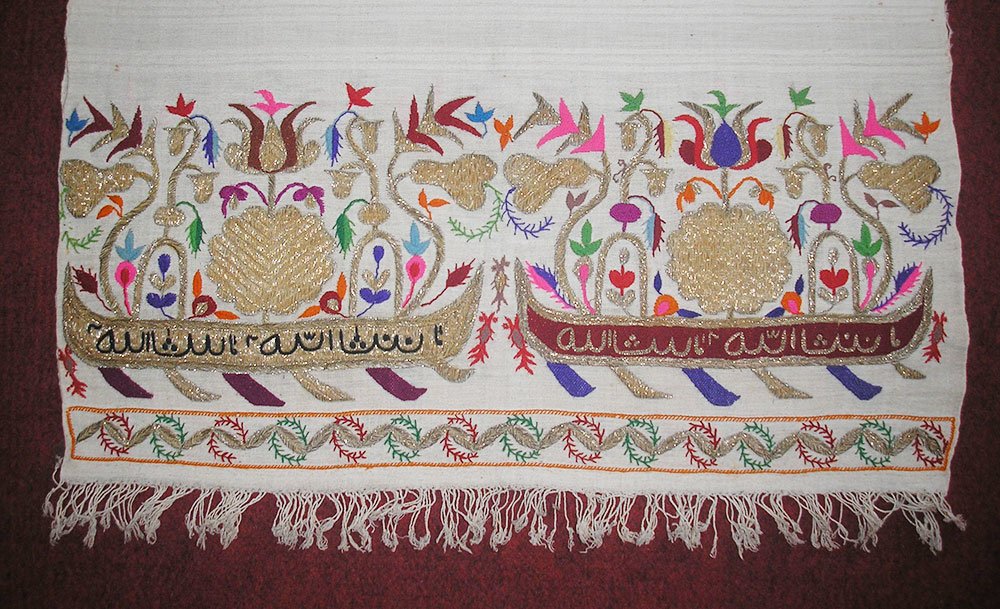 The ornament contains combined small elements, mainly of plant and geometric nature, of symmetrical and asymmetrical arrangement. The various elements of the ornament are combined into a single semantic center, which reinforce each other or form new signs. The names and semantic meaning of each element have been preserved in the Crimean Tatar ornament.

The ornamental motifs, depicted in various handicraft items, had their stylistic features, which depended directly on the technique of execution and materials used. The main motifs of the pattern are divided into two groups: floral and geometric. The floral ornament is typical for embroidery, carving on stone and jewelry art. Geometric motifs prevail in weaving and carpet weaving.

The traditional ornament, in addition to its artistic and aesthetic value, had an important magic and sign function. Special information was encoded in such an ornament, which, with the help of special signs symbolizing magical content, protected against evil forces. 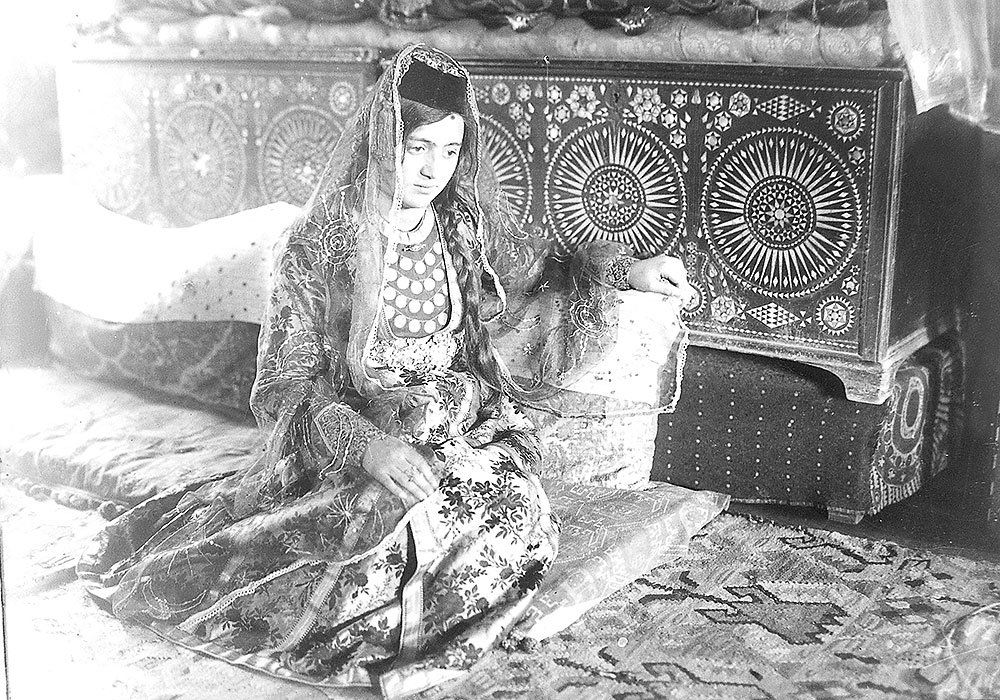 Bride's room. Exposition of the National Museum of the Crimean Tatars, 1920's (Bakhchysarai) 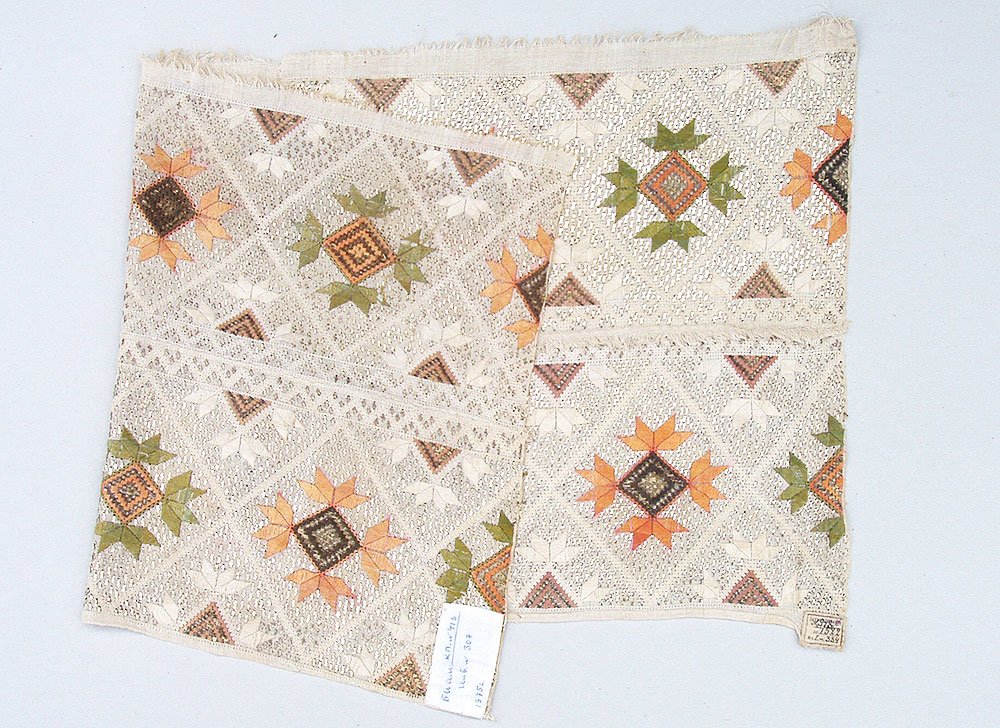 Goods, embellished with traditional ornament, decorated the interior of the houses. These were towels ("eu-jiyar", "yagbez", and "sofa-peshkir"), napkins ("yemeni"), handkerchiefs, and curtains, carved wooden chests ("sandyk") and copper utensils.

The interior of the room of the bride was richly decorated. Before the wedding, the girl was preparing a dowry, which included hundreds of household items that the girl embroidered together with her girlfriends. During the wedding, the room of the bride was festively decorated. Dozens of ropes were fastened under the ceiling, diverging radially from the center. All the fabrics and clothing richly decorated with embroidered and woven ornament were hung on these ropes and around the perimeter of the wall,.

Items, decorated with traditional ornamentation, were important attributes in many rites. Fabrics and items of clothing were universal gifts during all family and public rituals. During the circumcision (“sunnet”) and wedding ("toi"), the winners of the traditional wrestling ("kuresh") or horse racing ("koshu") received embroidered vests, scarves and livestock. The bride was preparing for a bridegroom a set of gifts of nine items, established by the tradition: a tobacco pouch, garters for socks, a towel for a rite of shaving, an "ochkur" belt, etc.

The living traditions: the modern state of the development of decorative art 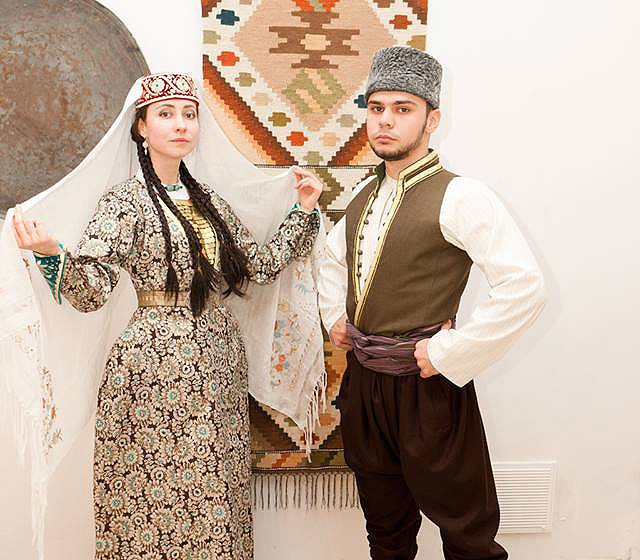 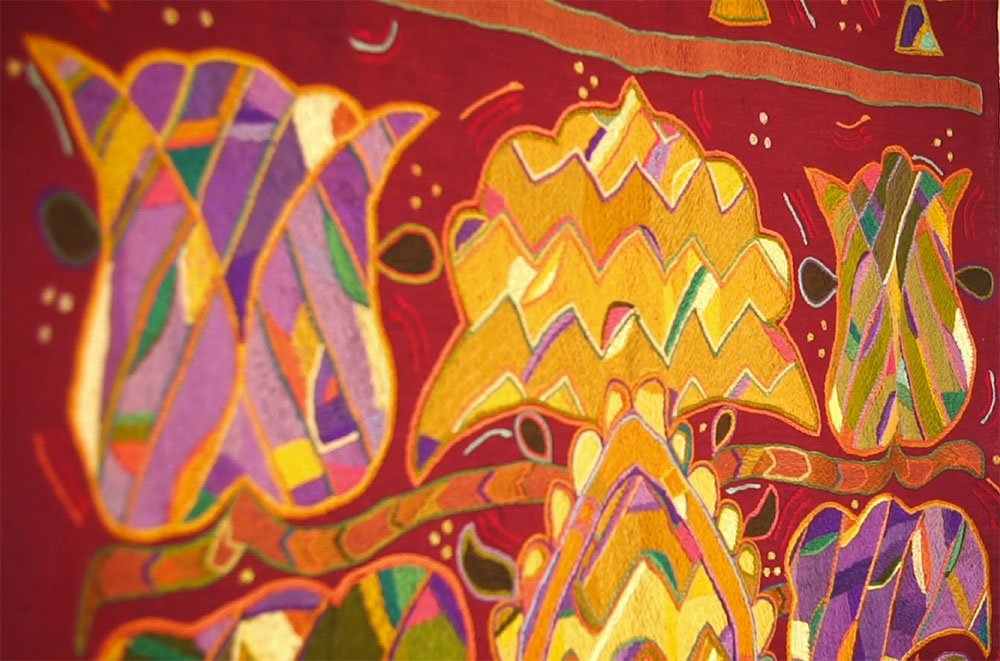 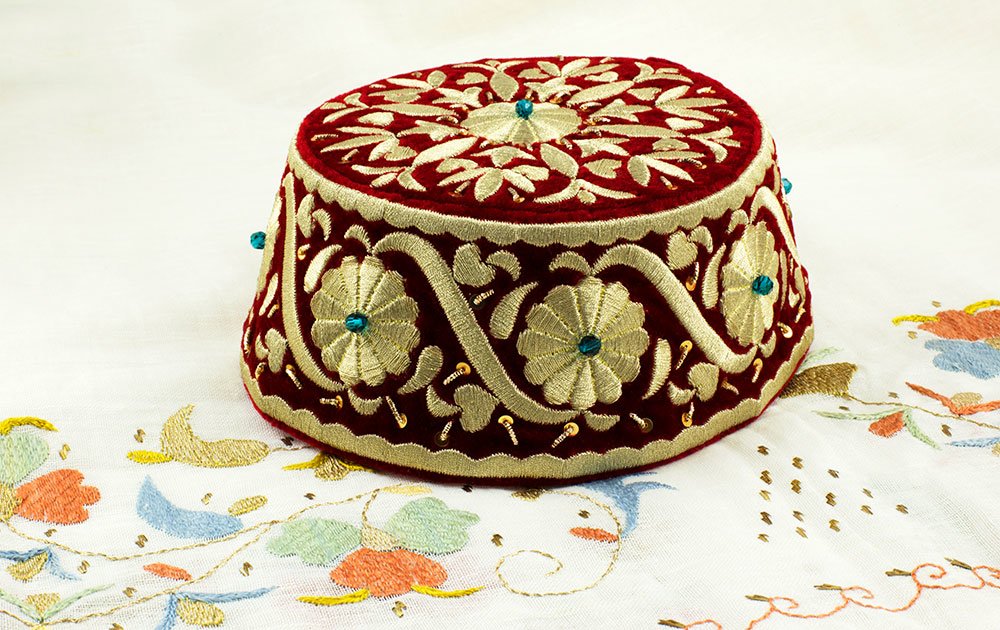 The events of deportation of 1944 caused the irreparable losses to the ornamental art of the Crimean Tatars as the people were put in the conditions of survival. The revival of various folk crafts (jewelry, pottery, weaving and embroidery) began in the early 1990s . In particular, in 1991 in Simferopil, the courses on traditional embroidery started to operate, on which Zuleikha Bekirova, the inheritable craftsman, passed her knowledge.

Today, such craftsmen as Elvira Osmanova, Julia Tulupova, Gulnara Negliadenko, Tamara Kliuchkina and Khatidzhe Yunusova and others. During the making of the ornament, the craftsmen endow it with their energy and vision of the development of cultural tradition through the prism of today. The ornament is an important means of transmitting socially significant information, it carries the property of the community as an integral part of society, enriches it and inspires progress.

In the early 2000s, Aider Asanov, the inheritable jeweler, began his work and taught over 20 students of his craft. The artist and art critic Mamut Churlu made an outstanding contribution to the development of Ornek, the traditional Crimean-Tatar ornament.

Peculiarities of the use of ornament in modern works of art are the combination of different techniques and techniques in one work. On February 12, 2018, Ornek was included in the National List of Elements of Intangible Cultural Heritage of Ukraine.

Some photos were kindly provided by NGO "Alyem".