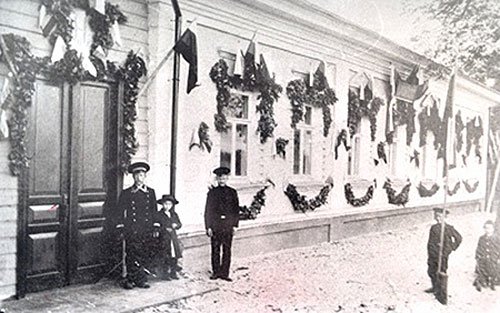 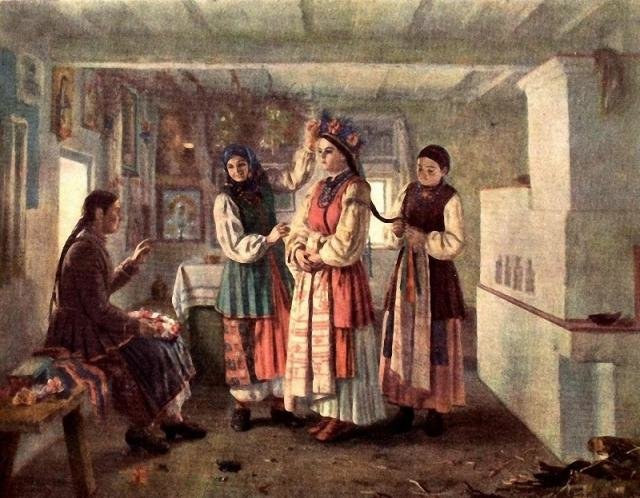 Weaving in Krolevets has been developing since the city was founded. According to the research, the weaving manufacture appeared no later than 1765. Avdiyikha Obolonska and her sons, who lived in the 1780s, are considered to be the first known weavers from Krolevets. The woven towels gained their biggest popularity in the second half of the XIX century at the local fairs, including Khrestovozdvyzhenskyi Fair in Krolevets and Illinskyi Fair in Romny. Later, their popularity spread all over Ukraine as they were a vital element of wedding ceremonies in Sumy, Poltava, Chernihiv regions. The whole families of weavers worked in the town of Krolevets. Nastya Ivanytska and Petro Bidnyi were the famous weavers, both had their own style, a peculiar manner of weaving.

The most famous dynasty of weavers and buyers is Ryndia family. Ivan Ryndia quickly noticed that trade gave him more profit than weaving and became engaged in the accumulation and sale of towels. Gradually, he created a monopoly on the products of Krolevets craftsmen. After visiting Paris, London and Barcelona exhibitions where he was awarded honored medals, Ivan Ryndia multiplied his grandfather and father achievements. In 1875, he contriibuted to the construction of the premises for weaving workshops for a zemstvo (local government) school. At the same time, his surname appeared on Krolevets towels, and the towels themselves became a brand, and got into collections of private collectors, as well as Kyiv and Chernihiv museums and the Museum of Emperor Alexander III in St. Petersburg collections. The towels were exported to Italy, Canada, the USA, France abd Japan. 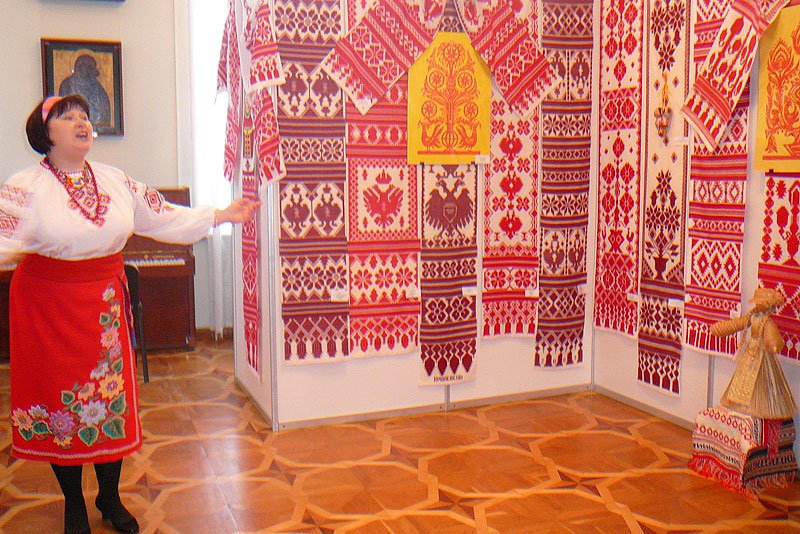 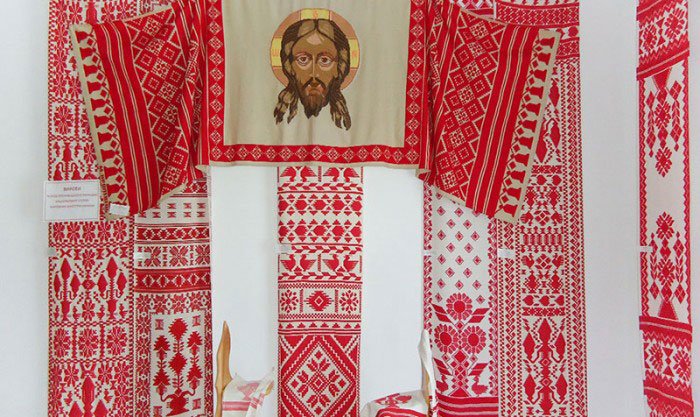 Woven towels from the exposition of the Krolevets Weaving Museum, Krolevets (Sumy region)

Krolevets woven towels, created in the technique of weaving, are works of art of traditional folk crafts of Ukrainians of North-Eastern Polissya. The rich geometric ornament of Krolevets towels consists of symbols corresponding to the Ukrainian outlook. You can recognize this wonder towel among hundreds of others – due to a combination of white and red colors with a thick ornament of:

The central part of the towel is filled with a distinctive anthropomorphic symbol that resembles the figure of a woman with raised hands or the shape of a candlestick that is eventually replaced by a "blooming flower pot". The main ornament of the Krolevets towel is a "tree / flower of life" or "Beregynia goddess". Stylized patterns, interspersed with horizontal stripes of different widths, create a unique compositional rhythm, typical of Krolevets holiday towels.

Wedding towels are of particular importance in the Krolevets area: "binding" towels (linking matchmakers and bridesmen); "Pidpereznyky" (in Sumy and Poltava region in the 19th and 20th centuries, bride and bridesmaids girdled their wedding dresses with such towels), wedding towels and towels to put a ceremonial round loaf on. Craftsmen were weaving the "bayonet" and paired elements as symbols of the family throughout the length of the towel. Such elements included "vases", "candlesticks", "ducks", "pigeons", "roosters". Most distinctive elements were "an eagle and a female eagle" - the image of two-headed eagles with crowns on their heads. This is where the names of towels - "royal", or "eagle" - comes from.

Towels are given to the elders and the bridesmaids. A separate type of woven towel is created for the wedding loaf (korovai) called pid korovai. The wedding towel, where the brides stand, is hung in a prominent place, and special towels are woven on the icons named bozhnyky.

The secrets of weaving 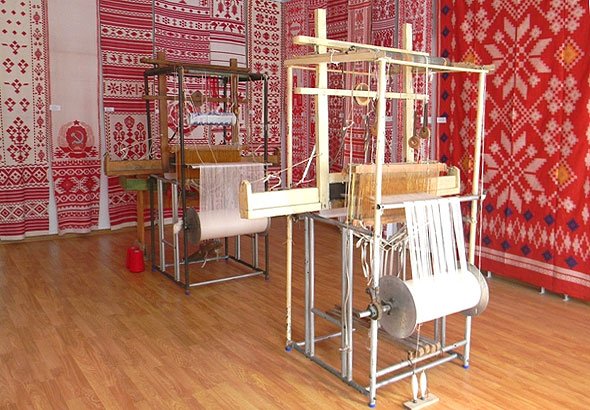 Weaving machine (an exhibit of the museum)
Vity OKM

For the manufacture of a towel even nowadays the multi-heald machine with four stands is used. Such towels are woven with red and white cotton threads in a complex technique of manual sorting. For the base, the linen, hemp (and nowadays cotton threads) of white and red colors were taken. The threads were bleached and dyed in red with natural dyestuffs made of cochineal.

Five techniques were used for weaving, including the oldest two-way techniques like "as canvas", "as the parks" (the rarest towels), "as reps". The color of woven patterns on them is not bright due to the alternating white and red threads.

From the middle of the nineteenth century, the two-sided biting techniques were replaced by one-sided. These include "Myropilska" and "with a choice", or "Rykhlovska". Their ornament is a rich color on one side. On the other side of the towel, only the place where the thread was laid is visible.

Weaving Krolevets in the past and today 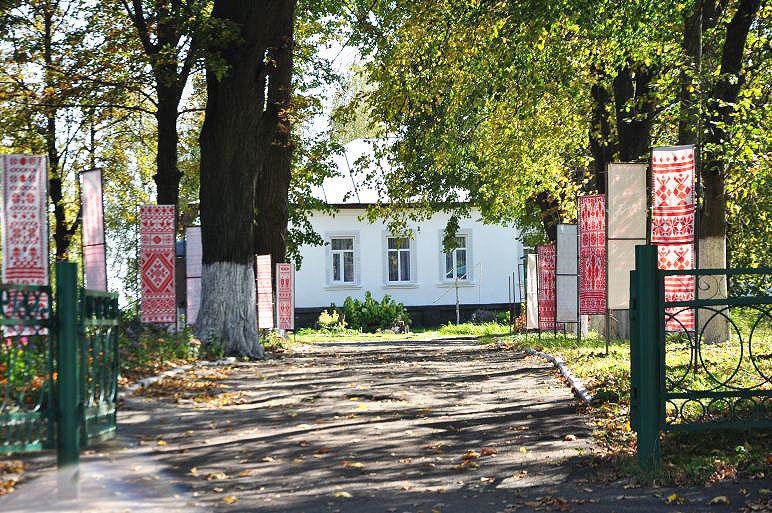 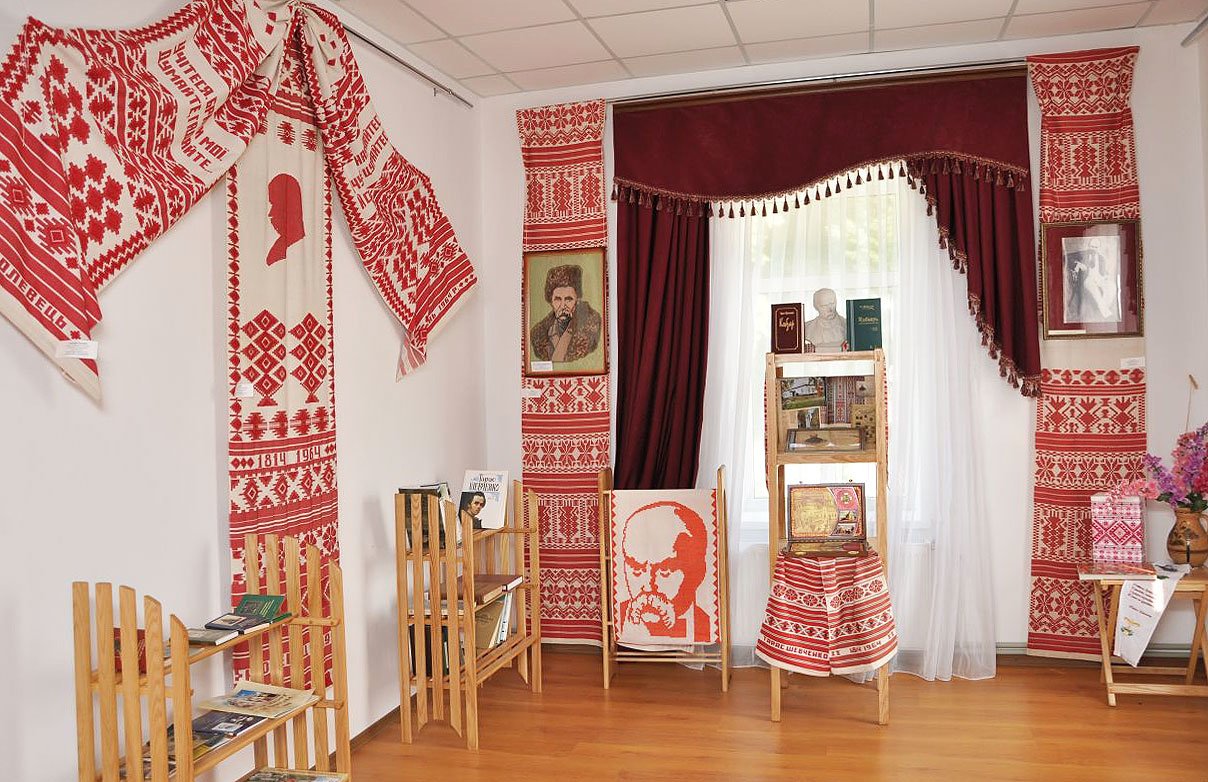 Exposition Hall of the museum of weaving. Krolevets 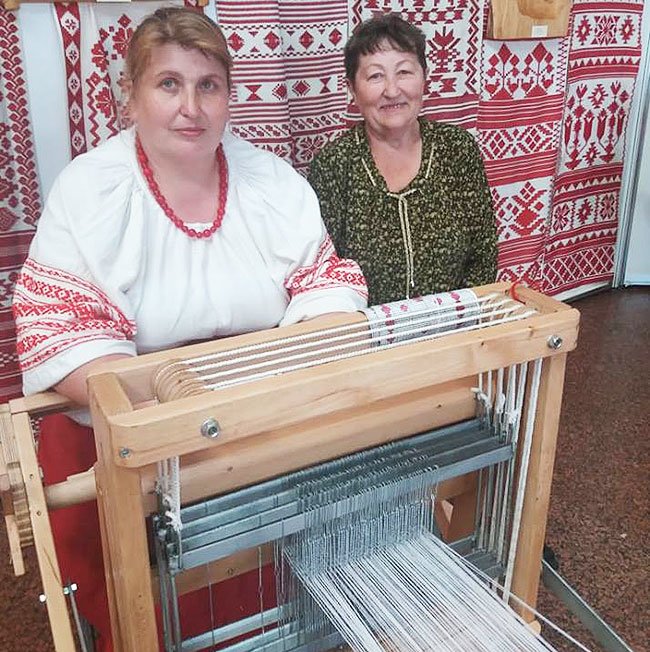 The first weaving enterprise in Krolevets was created in 1922  when the home-working weavers joined the artel of decorative-and-artistic art called "Vidrodzhennia" ("Renaissance"). Since 1960, the Artel has become the Factory of Art Weaving, and in the 1970s, Krolevets was one of the leading centers of pattern weaving in Ukraine. Products were exhibited in 50 countries of the world!

Since the 1990s, for weavers, as well as for the whole country, the tough times have come, and by 2007 the factory went bankrupt. In order not to lose the age-old achievements of Krolevets craftsmen, in 2008 at the place of the factory, the communal enterprise "Krolevets Art Weaving" was created. Today, unfortunately, it only has two enterprise-based weavers while a few more weavers work at home.

Since 1994, the International Literary and Arts Festival "Krolevets Towels", which involves weavers from the regions of Ukraine and other countries, has been held in the city, and, on the premises of the former Ohievskyi Manor, the Museum of Krolevets Weaving was opened in 2011. The museum hosts the opening of the festival, handicraft fairs, an art forum for weavers, and exhibitions of ancient and modern towels.

In February 2018, Krolevets weaving was included in the National List of Elements of the Intangible Cultural Heritage of Ukraine in order to preserve its traditions. This act envisaged measures to protect Krolevets weaving by the communal enterprise "Krolevets Art Weaving" and the Department of Culture of the Krolevets District State Administration.

This page uses materials and photos from the Sumy Art Museum and the Museum of Krolevets Fabrics (Krolevets).