Wild-hive beekeeping is a traditional type of folk craft, a forest form of beekeeping. To extract honey, beekeepers first kept bees in natural or artificial hollows of trees, and later in specially made log hives that were hung on the forest trees or placed in houses. 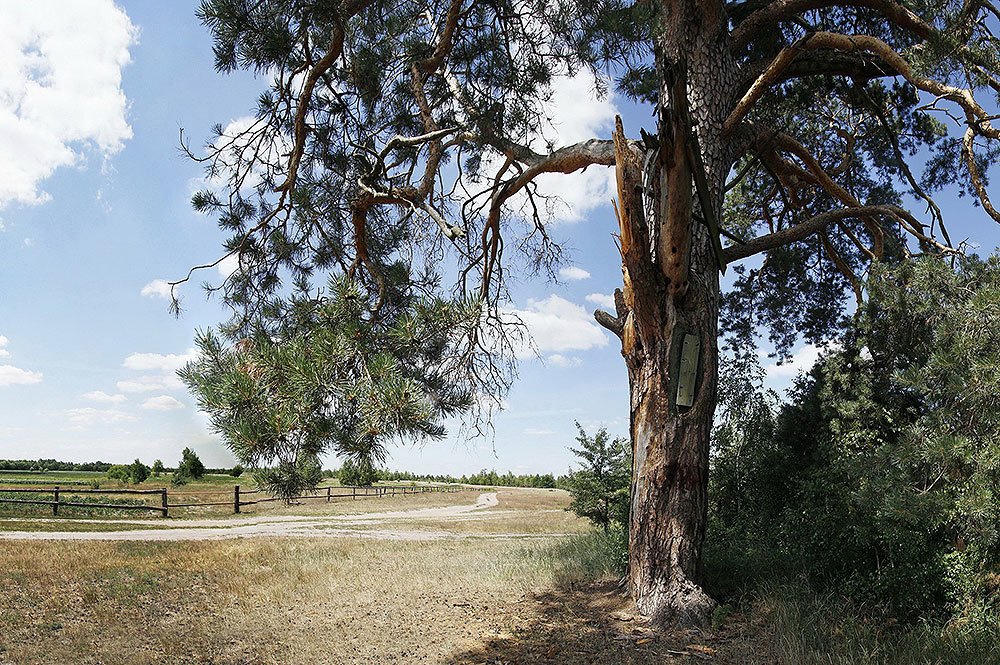 Beekeeping tree with a hollow 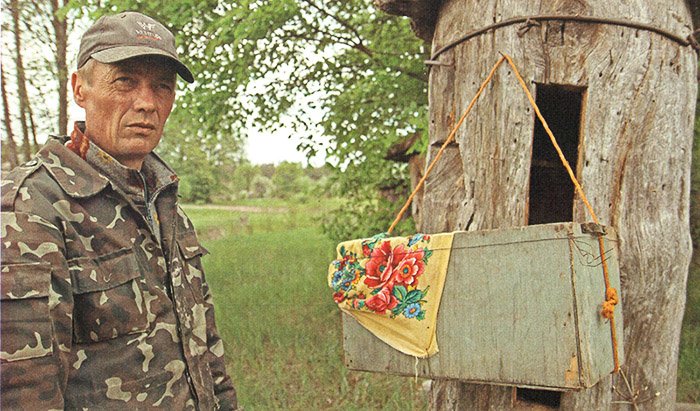 The history of the development of wild-hive beekeeping goes to times of Kyivan Rus.

The production of honey and wax is mentioned in the chronicles and notes of medieval geographers. The code of laws "Ruska Pravda" contains information about penalties for violation of the beekeeping limits, for the destruction of hives and trees with hives.

The history of the development of honey hunting dates back to the times of Kyivan Rus. The production of honey and wax is mentioned in chronicles and notes of medieval geographers. The Code of Laws of Ruska Pravda contains information on fines for violating the beekeepers’ property and for destroying beekeeping equipment.

In the times of ancient Rus, the Grand Duchy of Lithuania and the Rzeczpospolita, honey and wax were consumed, sold, and taxes were paid with them. Beekeeping was regulated by customary law and led to the emergence of special social categories of the population, as well as craft specialties (beekeepers, waxworkers, honey producers, candlemakers). As a mass type of peasant craft in Polissya, beekeeping existed in the 40-50's of the XIX century. Beekeepers created specific devices and adaptations that were known in northern Ukraine, Belarus, Poland and Lithuania without significant changes, under different names or in different variants. Beekeeping can be considered a common Slavic-Baltic historical and cultural heritage. Beekeeping terminology among these peoples is similar, which may indicate a millennial history of this craft.

On the territory of Ukraine, wild-hive beekeeping was developed in a number of regions: in Podillia, in the Carpathians, in Poltava region, in Polissia. However, in most areas in the XIX century it was replaced by more modern forms of beekeeping.

The tradition of the ancestors: 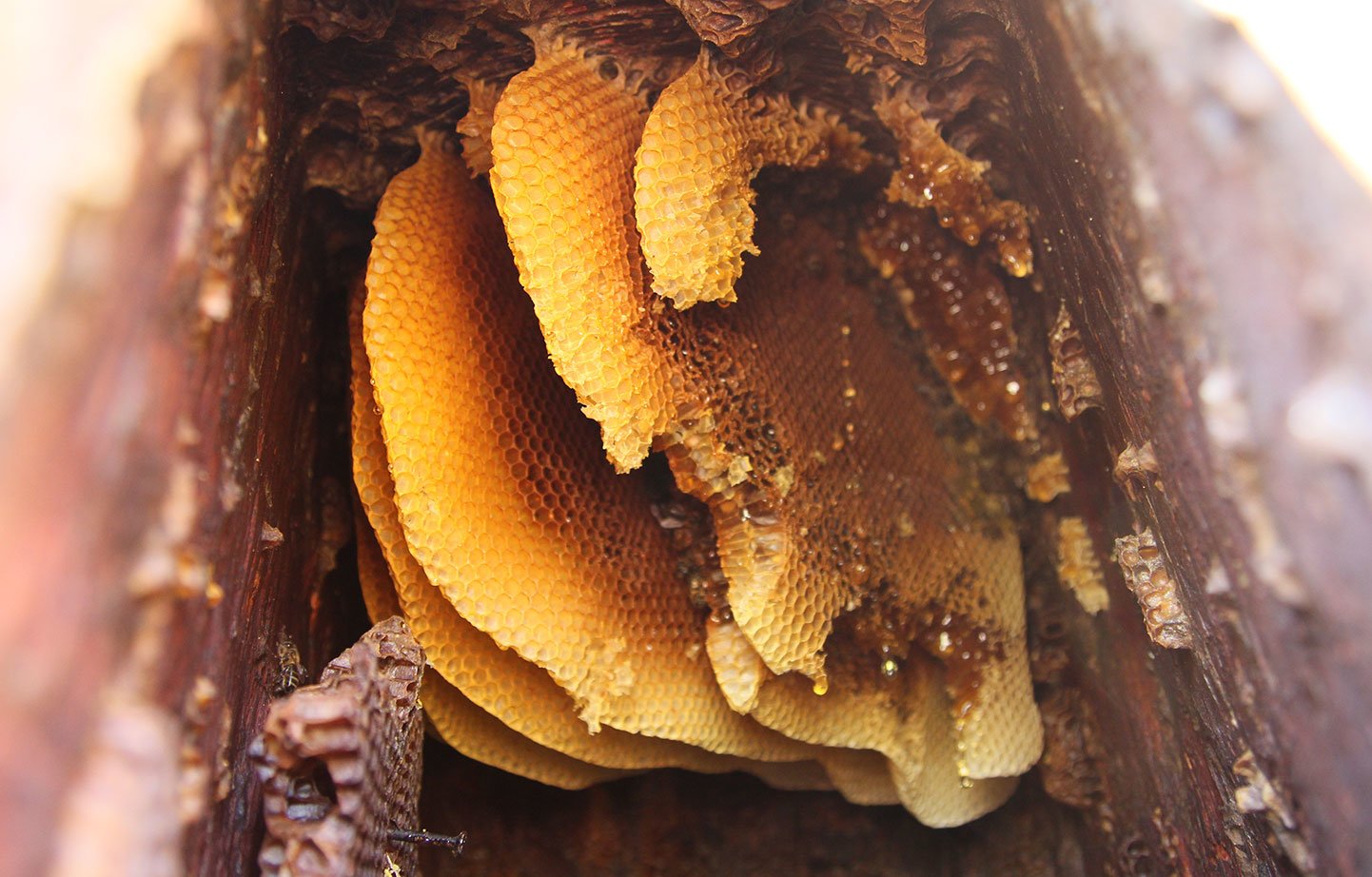 Honeycombs inside the hive 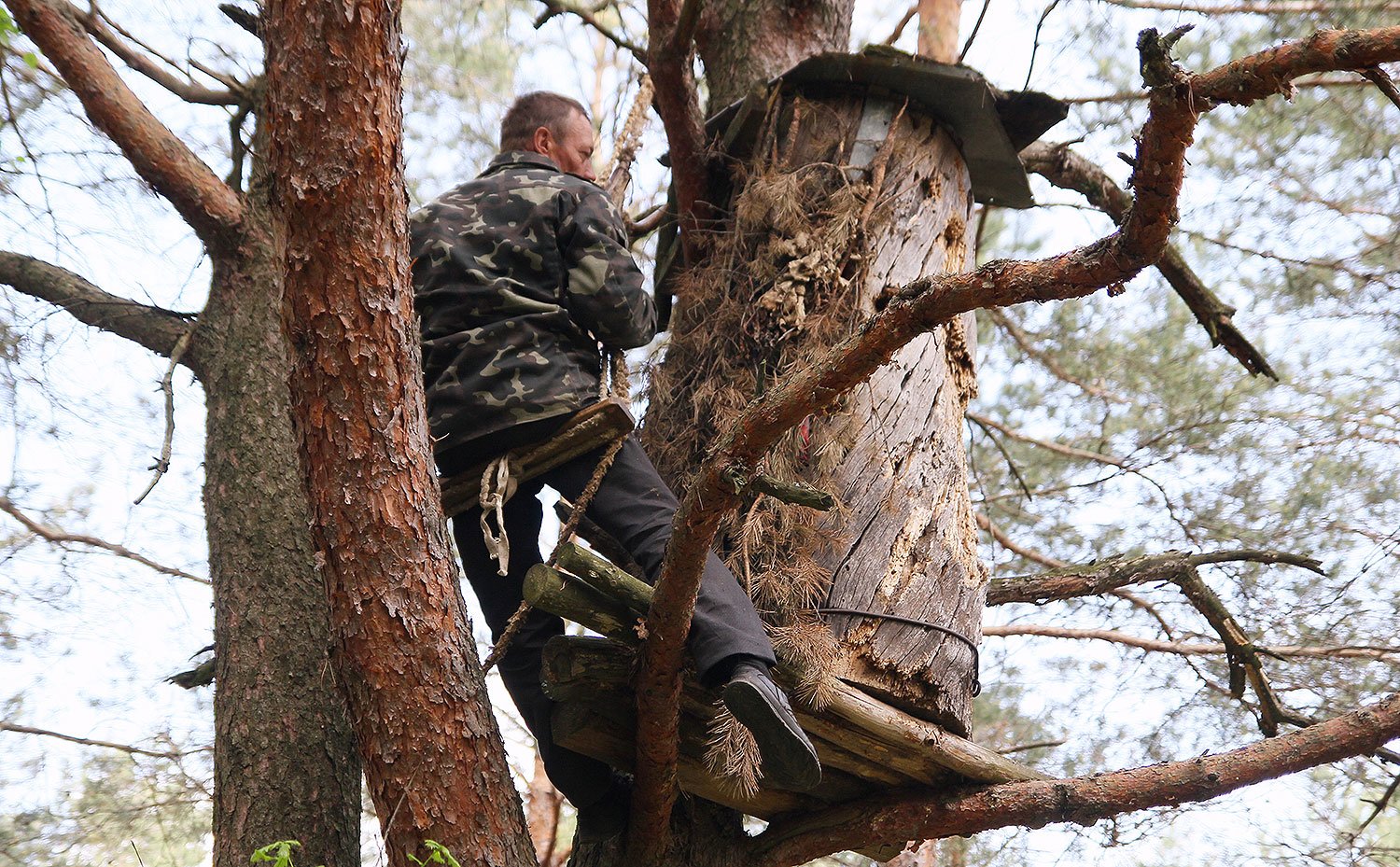 A beekeeper on the tree

Wild-hive beekeeping kept additional importance in the system of economic practices as a kind of traditional craft until the second quarter of the XX century in the Polissia region. Reclamation works in the Soviet era led to the suspension of wild-hive beekeeping in Polissia. As a result of such works, swamps with growing on them luxuriant vegetation of honey plants (especially heather) were getting drained and overgrown with forests.

«Noise and buzzing, the Queen bee is coming» 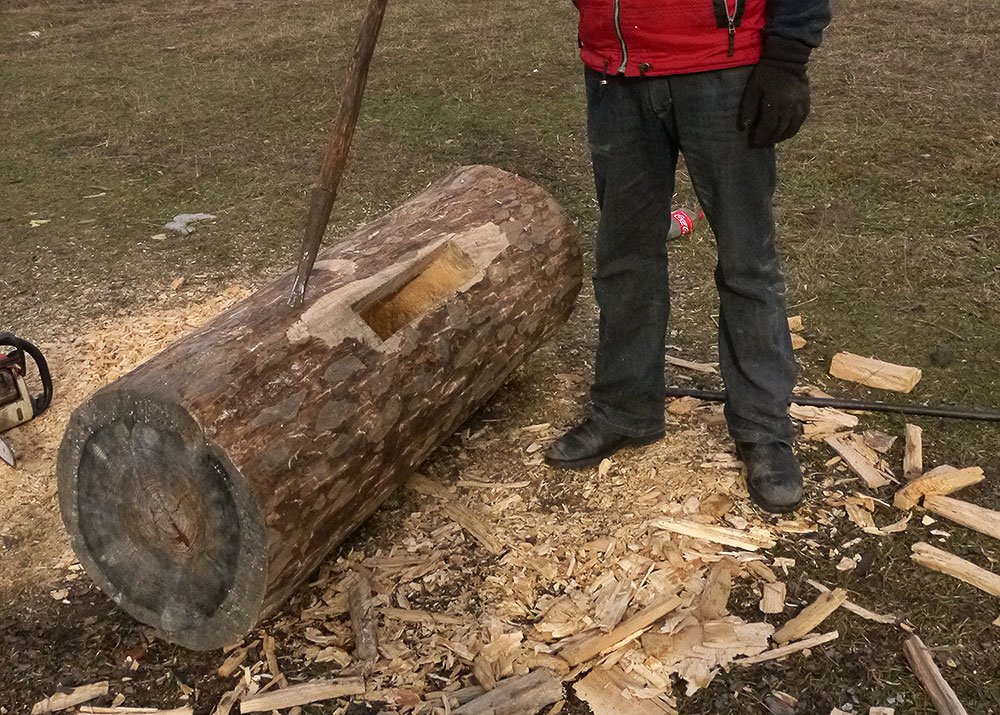 Production of a new hive 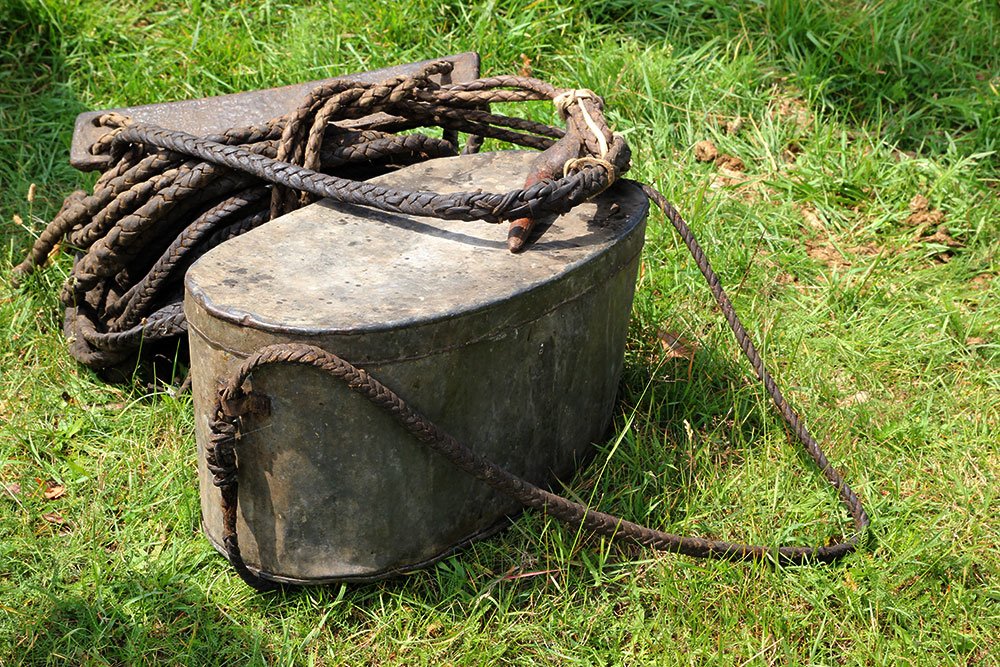 Ropes and a box for collecting honey 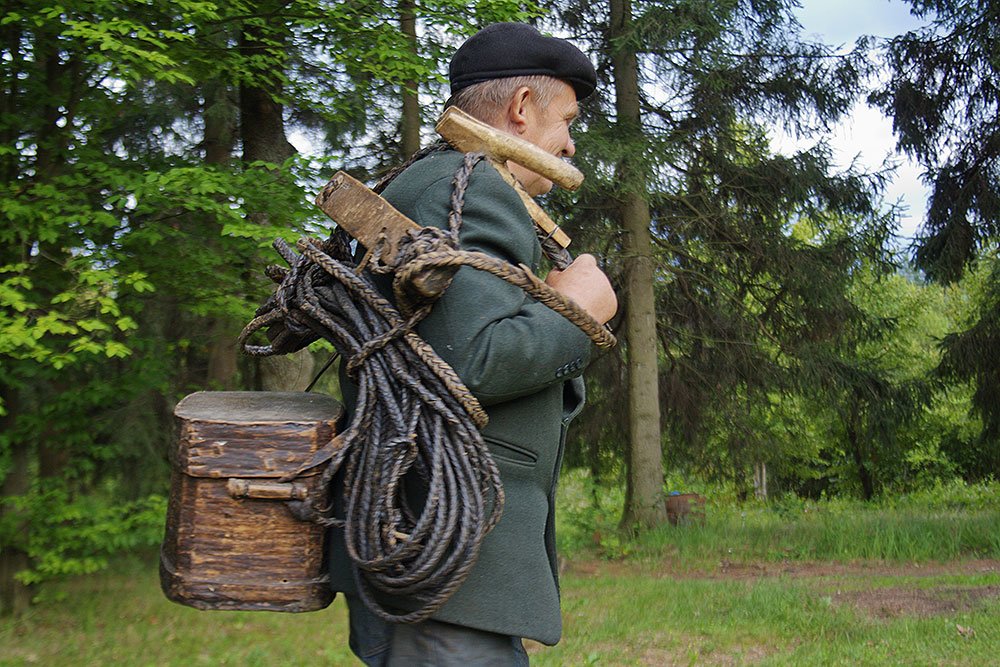 A beekeeper with his tools

Traditionally, wild-hive beekeeping was the occupation of men.  It was inherited via parental lineage together with hives and apiaries. The work of a beekeeper was to make hives in tree trunks or use natural holes in trees at a height of 4 to 15 meters above the ground. They dug holes in the trees when the bees settled there, made sure that the swarm did not freeze in winter, got honey and other bee products twice a year - in spring and autumn, leaving the bee family a third of the honey for the winter. In the North of Polissia, hives, as a rule, were installed in the crowns of tall trees, mainly pines.

In order to do this, people chose a tree that was not very shaded by other plants and was protected from the winds. In the South of Polissia hives were often kept within the estate. Polissia beekeepers from ancient times were breeding a special local breed of bees, which was known as “Sliepotni” (Wild) bees. This breed was considered to be hardy and resistant to diseases.

Hives were traditionally made of logs of different trees (oak, pine, linden and alder). To construct them, the inner part of the logs was hollowed out. Beekeeping tools have preserved the ancient forms and types of tools for woodworking, for lifting hives on wood and devices that were used for lifting on wood - leather or hemp (nettle) rope. The beekeeper climbed on the tree with the help of braided leather rope or hemp cords of 25-30 meters in length. The rope was attached to the roost, on which a beekeeper sat, and a hook. The beekeeper put honey into a special box. Later, people began to put ladders to the trees. For fumigation of bees, people used a smoking-tree branch (buckthorn), at one end of which a wooden splinter was fixed. In their work beekeepers also used a wheel to pull heavy logs onto trees. Often, tools of wild-hive beekeeper (hook, boards that covered the entrance to hives) were decorated with geometric carvings. 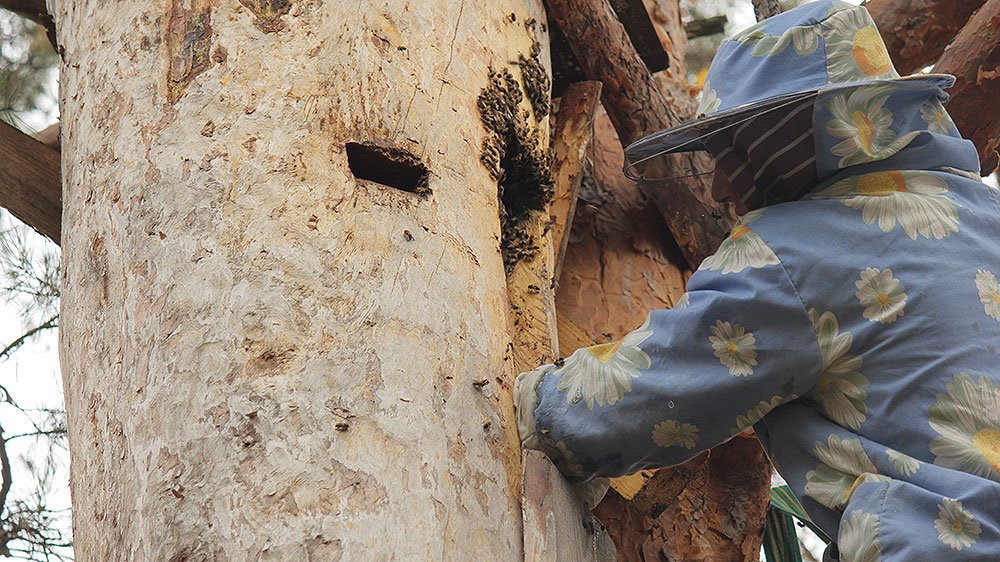 Selection of honey from hives 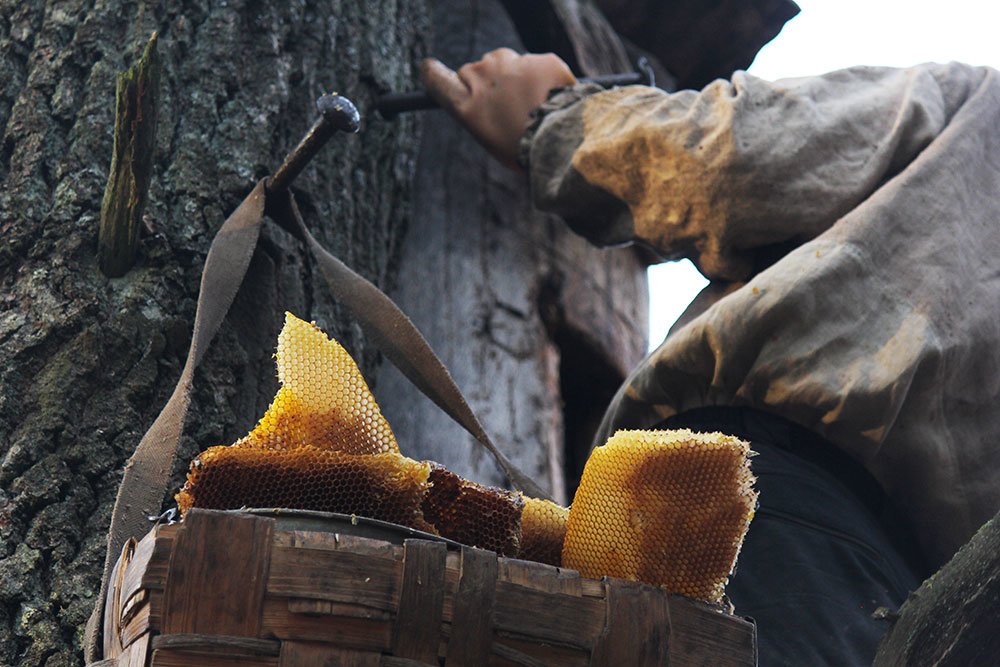 Honeycomb in the box for honey collection 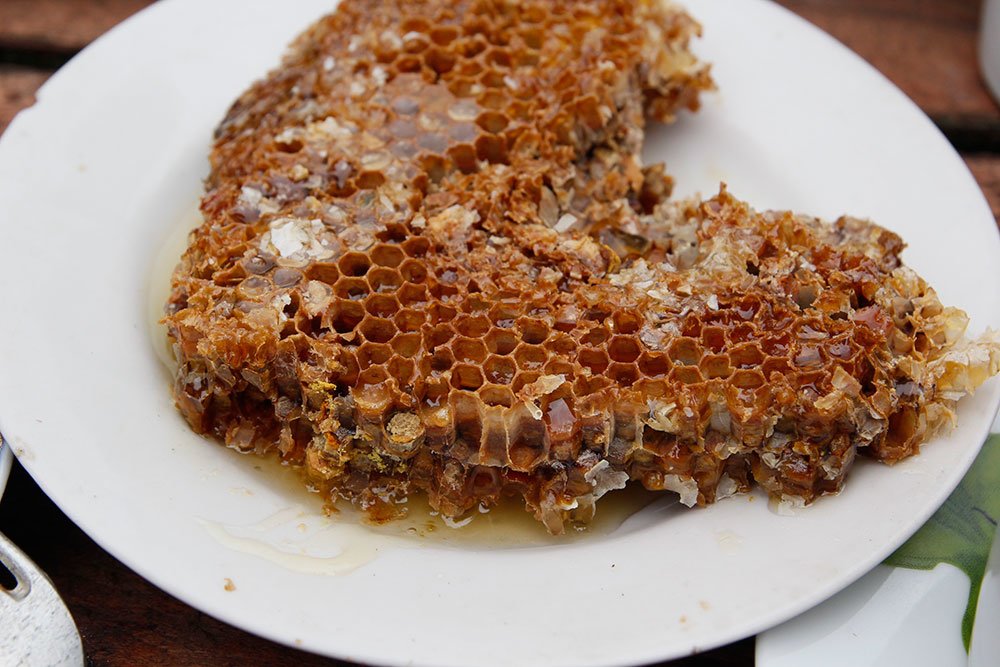 Making new hives usually was the task for autumn and winter, during that time the wood had to dry up. In the spring cleaning of old hives was carried out, usually it was done after the holiday of Warm Oleksa or the Annunciation. Beekeepers could determine the weather judging by the behavior of bees. For example, if bees flew out of the hive early, beekeepers expected a warm spring. Wild-hive beekeepers took honey from hives only once a year - in the autumn. As a rule, honeycombs with honey were cut out to a half and the remaining honey was left for bees as food for the winter. After the collection of honey, beekeepers began preparation of hives and bees for the winter. This process lasted from the Holiday of Reverend Simeon (September, 14) to the Second Most Holy Mother of God holiday (September, 21), and in the Northern areas even to the Virgin of Mercy holiday. During this time, the hives were insulated and covered with pine needles to protect them from pests (mice and mustelines).

It was thought, that beekeepers had special magical knowledge. Before starting work, a beekeeper washed his hands, prayed, and only then climbed the tree. Each dynasty of hereditary beekeepers had their own spells, which defended bee colonies. In order to be lucky in beekeeping, the first honey consecrated on the Festival of the Saviour was distributed among children.

People also told fortunes for the honey crop during the important calendar holidays, particularly during Christmas and Rich Kutia. During the Christmas holidays, carolers sang special cheering songs for beekeepers:

Master, we're not missing you,
Congratulations on Christmas.
Get out of bed, open the doors,
Lay the tables,
Put the spring wheat rolls,
Go outside and look in your yard –
And there is noise in your yard,

Recorded by I. Nesen in the village of Sarnovychi, Zhytomyr region

Recorded by I. Nesen in the village of Sarnovychi, Zhytomyr region