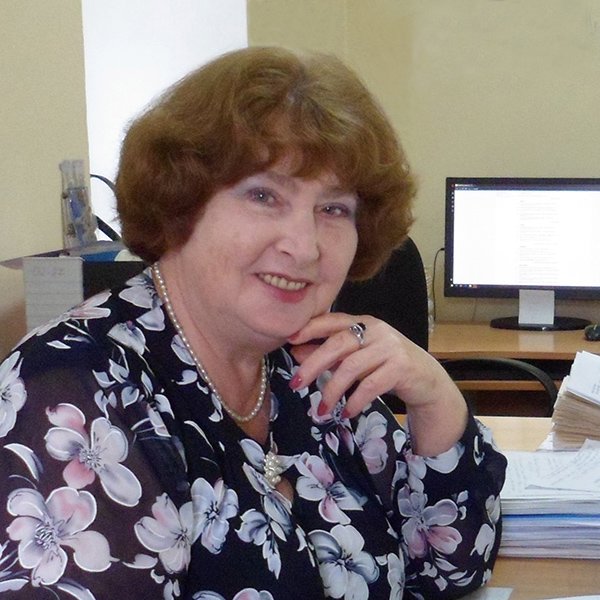 Art critic, Deputy Director General for scientific work of the National Museum of Ukrainian folk decorative art, winner of the Stefan Taranushenko all-Ukrainian Award. She graduated from the Kyiv State Art Institute (now NAOMA) in 1972. The Museum has been working since 1973. She is the author of more than 100 scientific articles and publications on the history of Ukrainian art.

«Oh,  my "Rose" the guild! Voile, madapolam. I embroidered patterns with anxiety in half» 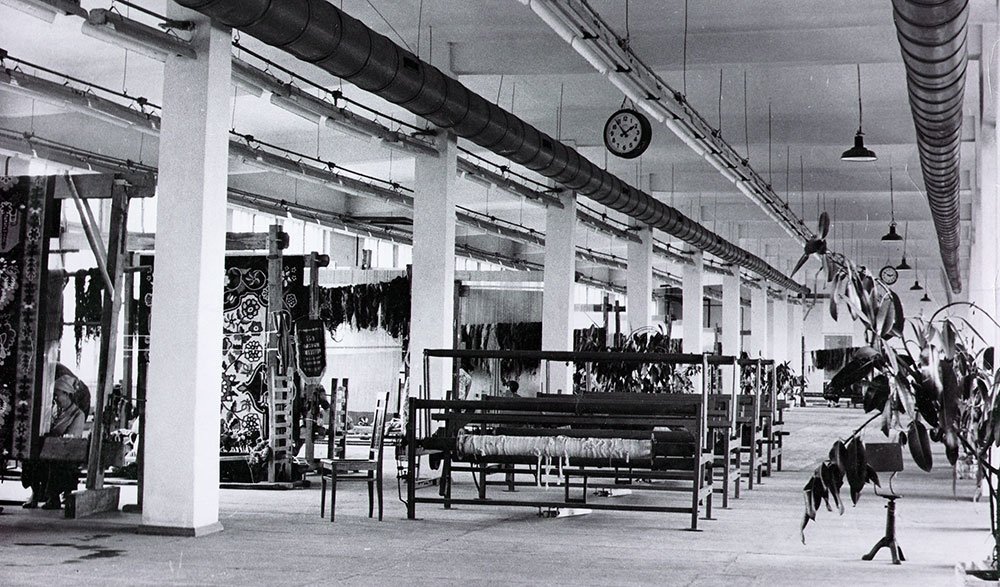 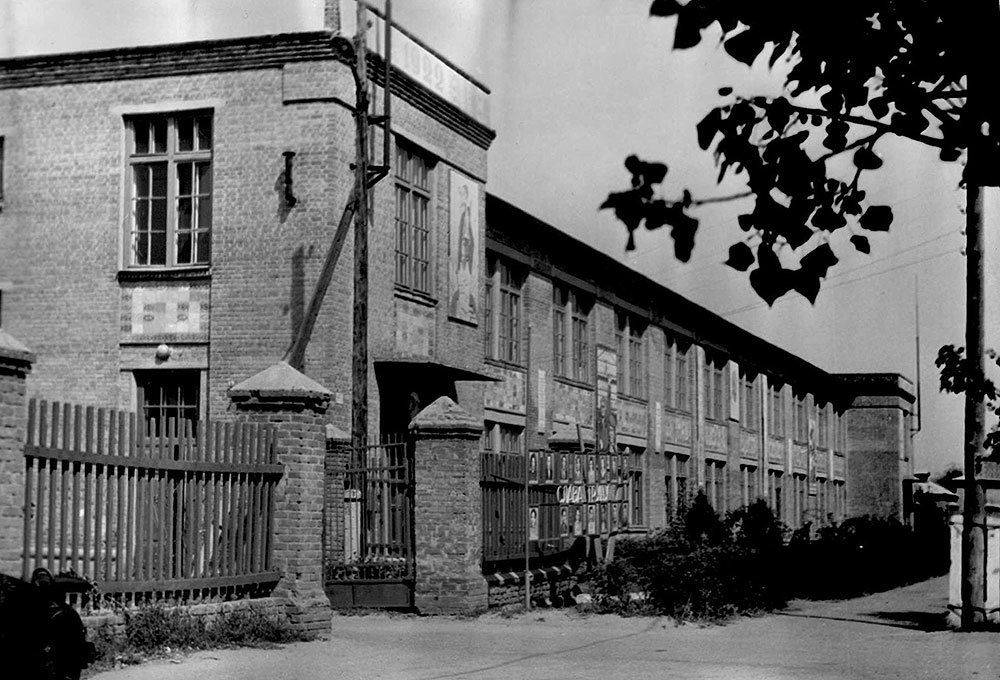 The  industrial artel artistic products, called “Rose” (spelled as “Troianda” in Ukrainian) was created in the city of Reshetylivka in Poltava region in 1922 on the basis of the workshop-school, opened in 1905 on the initiative of Poltava Provincial Zemstvo as Reshetylivka weaving training and demonstration point for making carpets, and a distribution point for homework. In 1926, it became an rtel (association), and its carpets became the hallmark of carpet production in Ukraine. A school of masters of arts and crafts was established next to the factory in 1937. Carpets were successfully exhibited at exhibitions in Paris (1925) and Leipzig (1928). Later, a Clara Zetkin art factory was opened on the basis of the artel, which operated until 2003. The years of prosperity for the company were the 1950s - 1970s. In the 1950s, the so-called "scientific" professional artists (with some artistic training) appeared at the Reshetyliv factory. In their individual work, they tried to develop and improve the local tradition of plant carpet to the extent of their own creative abilities.

The products of the factory decorated the interiors of public buildings, they were exported abroad (to India, China, Bulgaria, Romania and Hungary) and exhibited in Leipzig and Brussels (1958), Damascus (1959), New York (1963), Montreal (1968) and Osaka (1970).

In the 1970s, more than 450 carpet makers worked at the factory. Powerful production capabilities of the enterprise allowed to create, in addition to traditional ornamental carpets, large thematic works based on the paintings of professional artists. The Reshetyliv Vocational and Technical School operated on the basis of the factory, in 2002 it was reorganized into the Reshetyliv Vocational Lyceum of Art, which is still the main carrier and center for the preservation of plant-based carpet weaving in the Reshetyliv district. Today, the factory named after Klara Tsetkin does not exist. Products of this well-known enterprise far outside of Ukraine are stored in many world museums and exhibited at numerous exhibitions

Sources of inspiration for carpetmakers 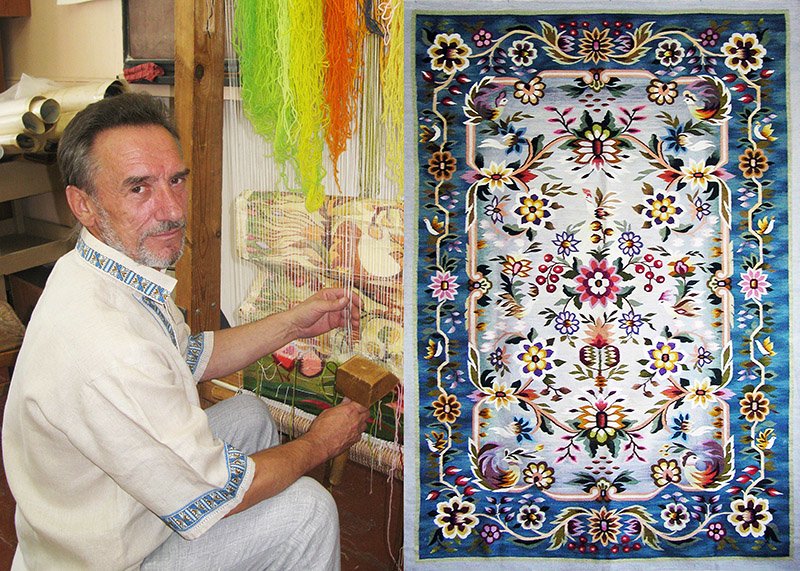 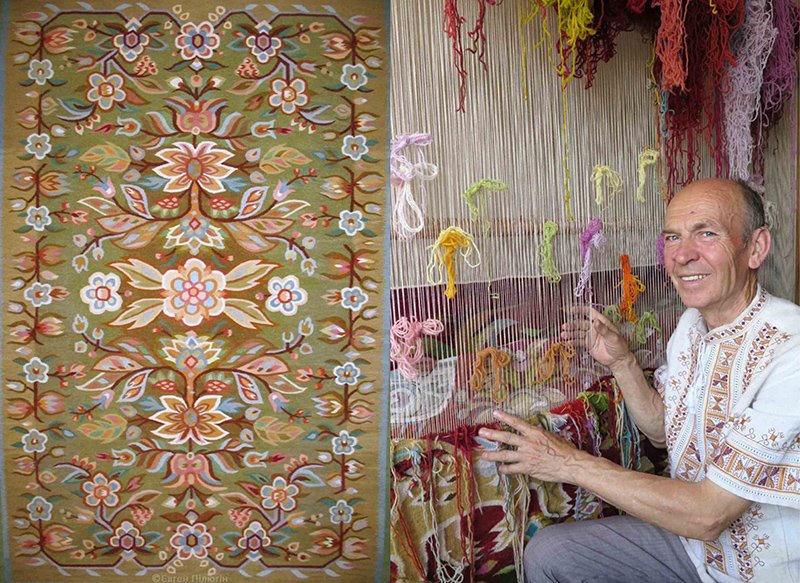 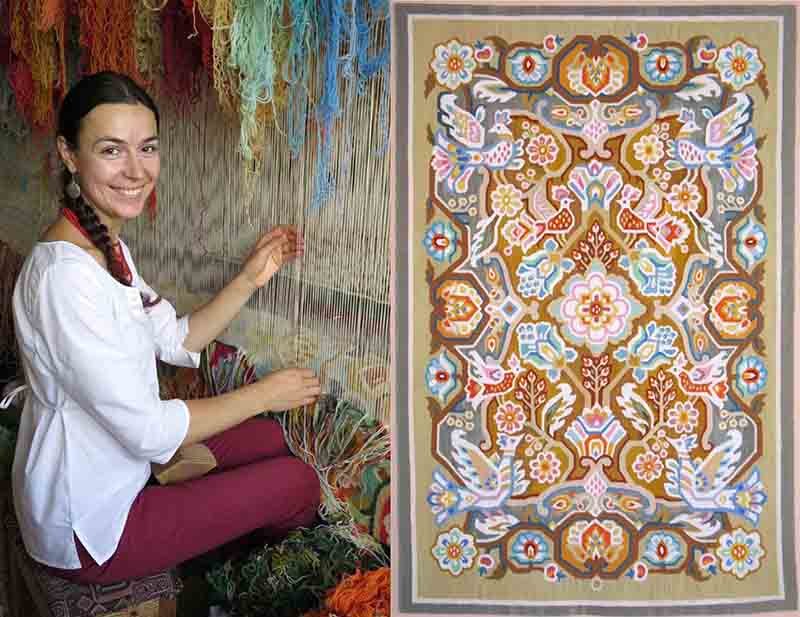 The history of traditional folk carpet weaving of Reshetyliv district in Poltava region goes to the mists of time. Archaeological remains found in this area are proving this fact. Fossilized prints of carpet weaves dating back to the Scythian period were found in the villages Druhyi Lyman and Pidok, Pustovary and Cherneshchyna (mound groups).

Kievan Rus, an early feudal state, formed at the turn of VIII-IX centuries in the Middle Dnieper. It was inhabited by northerners and glades. They also had carpet weaving. Mentions of carpets have been preserved in chronicles. Thus, in the Lawrencian Chronicle (977) it is said that the body of the murdered Prince Oleg "was abluted and laid on the carpet." And in the records of the Arab traveler Ibn Fadlan (first half of the tenth century) it is stated that in Ukraine carpets were used to cover the deathbeds. That is, carpets at that time were used for both various rituals, and everyday use.

Carpet weaving developed significantly during the Cossacks, starting from the seventeenth century. The natural and geographical factors facilitated the development of this craft in Reshetylivka. Large flocks of sheep of the so-called "Reshetilov breed" grazed on wide meadows in the floodplains of the Govtva River. They were mentioned by Ivan Kotlyarevsky in the poem "Eneyida" and Mykola Gogol in the novel "The Night Before Christmas". Sheep's wool was used not only for making clothes, but also as a raw material for yarn, from which carpets were woven.

Since the XIX century the handicraft production of carpets prevailed in the Reshetyliv region. Almost every house had a loom, which made double-sided flat weave carpets, mostly with rounded floral ornaments. Taking advantage of the fact that the population had certain skills, after 1861 the landlady Khryapunova founded a weaving workshop in Reshetylivka. Carpets depicted traditional folk patterns, so their products were exquisite and unique. 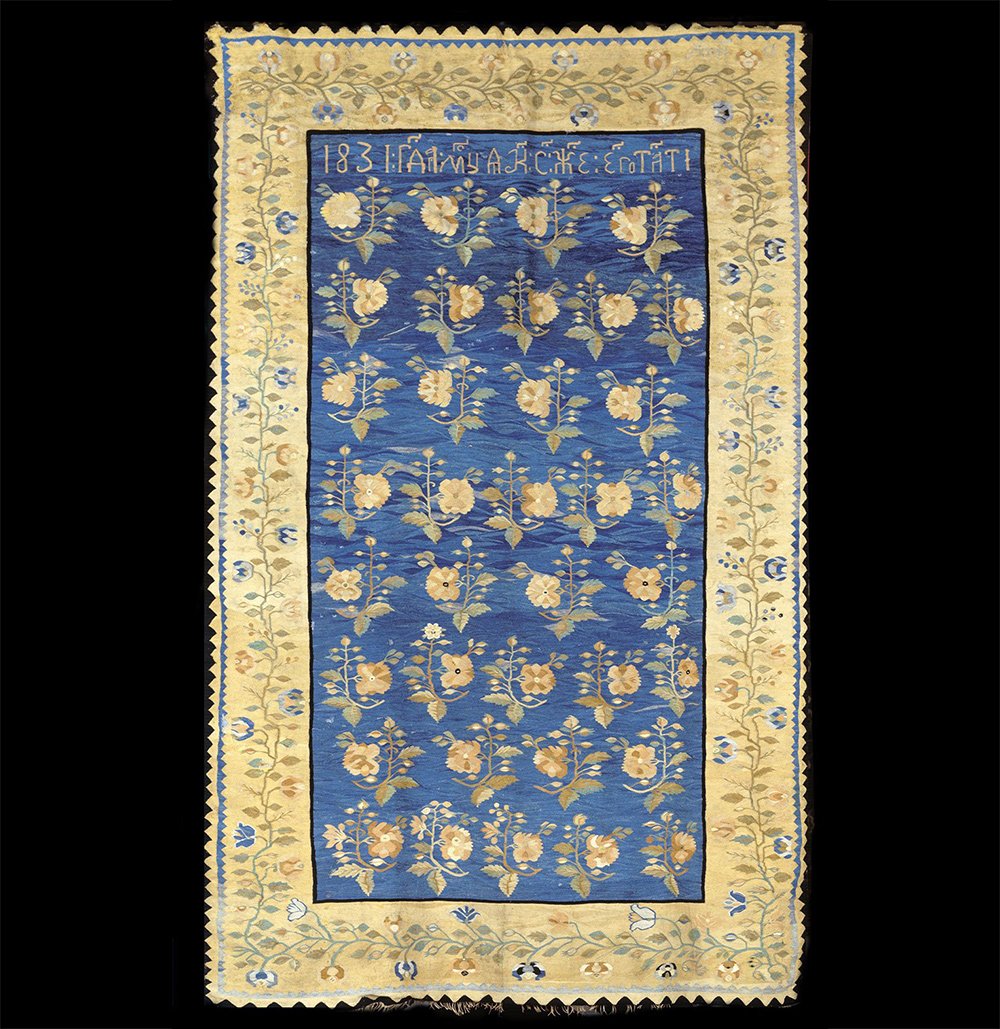 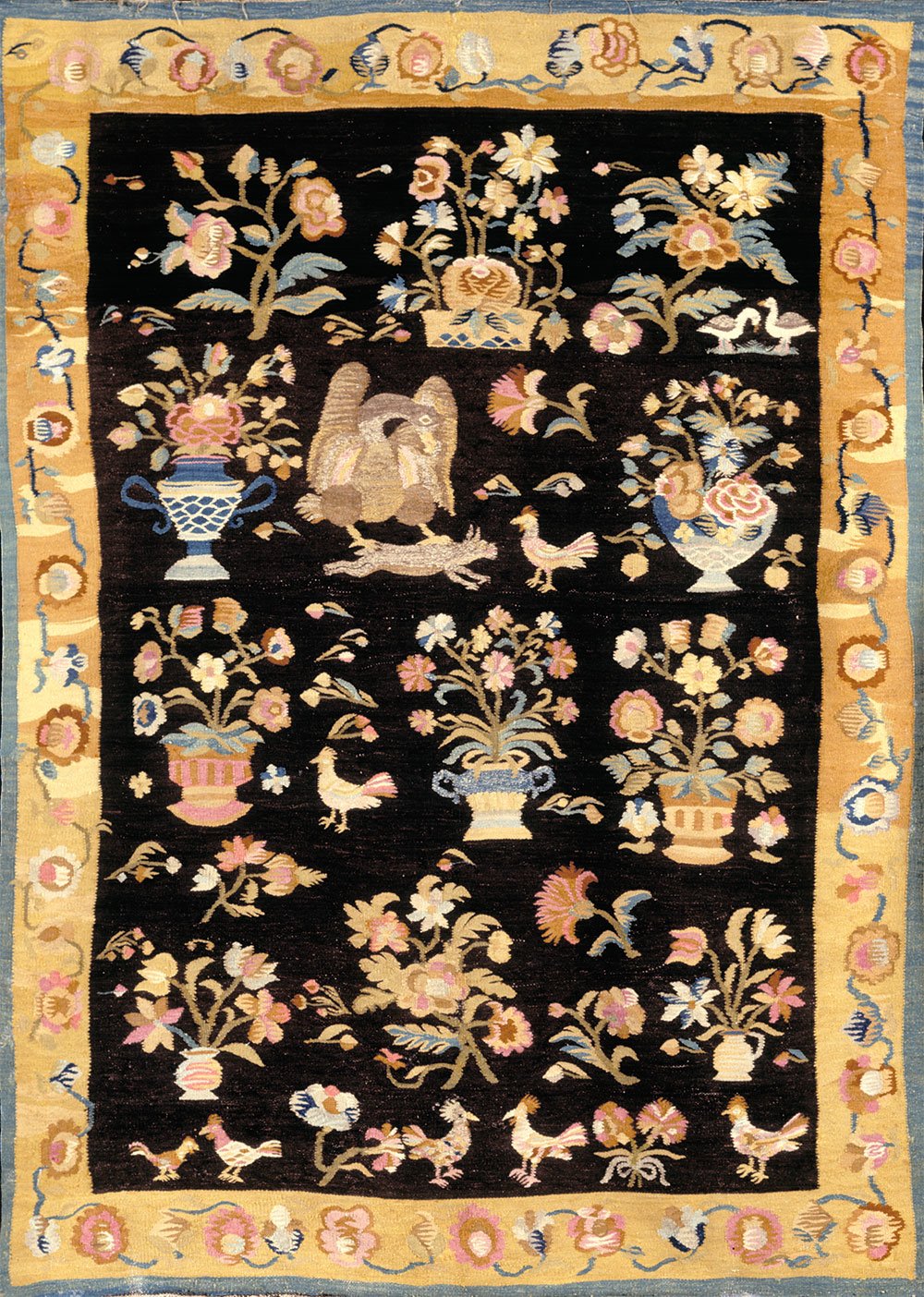 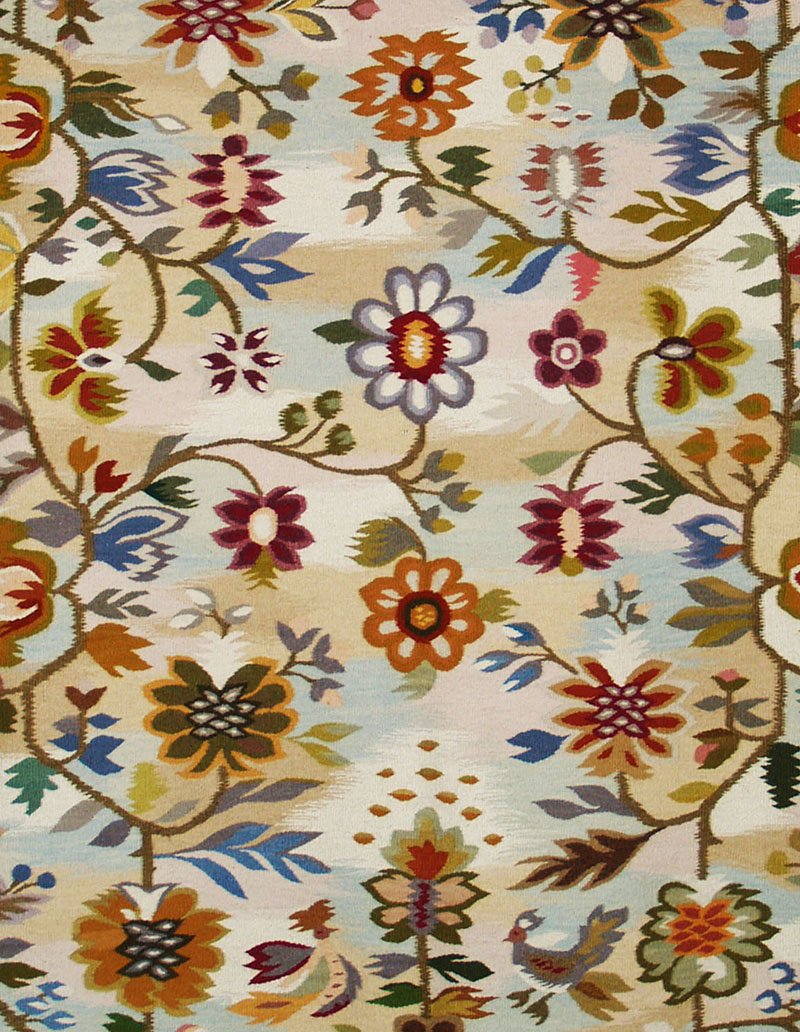 The style of Reshetylivka plant carpet weaving formed over several centuries is based on the principle of building an ornament with a picturesque background solution and it tends to the compositional motifs of ancient peasant carpets. The scenic decision of background is evident in the specific weaving "stinging" technique.

Woolen threads of alike colors lie evenly in horizontal rows in the weft and all plant forms flow smoothly into each other, organically intertwining with the texture of the product. A large number of shades are visible only up close, and from afar they are perceived by laconic solid spots and create the impression of a rich color harmony of shapes, lines and silhouettes. The background seems to flicker, vibrate, breathe myriads of weaves on the entire plane of the work.

The most common scheme is the rhythmic placement on the field of individual motifs in the form of multidirectional broken branches with flowers and leaves straight or oblique (staggered) rows. Reshetylivka carpets have a distinctive stylization of plant floral motifs, based on the influences of Eastern ornamentation. The ornamentation of Reshetyliv carpets is expressive, with smoothed, rounded edges of forms (in contrast to Podillia, Polissia or Western Ukrainian carpets, in which geometrized or combined stylistics predominate). Silhouettes of stylized plants are marked by a large number of light and dark contours, different configurations and thicknesses.

The background of carpets contains floral ornament or it may be plain, or it has different shades of the same color, the reason for this is the uneven coloring of the yarn and the specifics of the "rounding" technique, when the threads of the surrounded ornamental motifs lay down in wavy lines. Sometimes the ornamentation contained conditional images of birds among the branches and bouquets of flowers that fill the empty space, balancing the composition or present in flower motifs.

One can often see the image of a Pelican bird (a symbol of self-sacrifice), which feeds the chicks with its body. The lush ornamentation of vegetable and animal forms prevails  in the so-called landlord's carpets. The traditional plot of such carpets is the motif of the tree of life that sprouts from the ovary or flower pot or basket. Flower branches synchronously spread from the central stem, and a large flower or inflorescence completes the top of the tree. So-called "Baroque" was also made, the carpet pattern has the appearance of a large stylized floral forms that branches out across the field symmetrically from the center.

The middle part of the carpet is distinguished by a bent strip with curls (cartouche). The color of Reshetyliv carpets predominates in a soft, calm range of colors - mostly in warm and earthy shades. Mainly carpets with blue, golden-yellow or black background, at least-with white, gray, green and brown background prevail. Carpets are made on vertical looms (krosna) with “rounding” (“scalloping”) technique. Saturation of ornamental forms, their rapid dynamism; plastic flexibility speaks of the courage to decide the composition of works, it enhances their figurative sound.

«The carpet is the ground, my daughter, the ground decorated with spring flowers. Make the carpets, love them as our land»

These were the words that a well-known skilled carpet-master Natalia Vovk often heard from her mother. A whole cohort of talented craftsmen worked at the Reshetylivka  factory. For more than 40 years it was headed by Leonid Tovstukha. 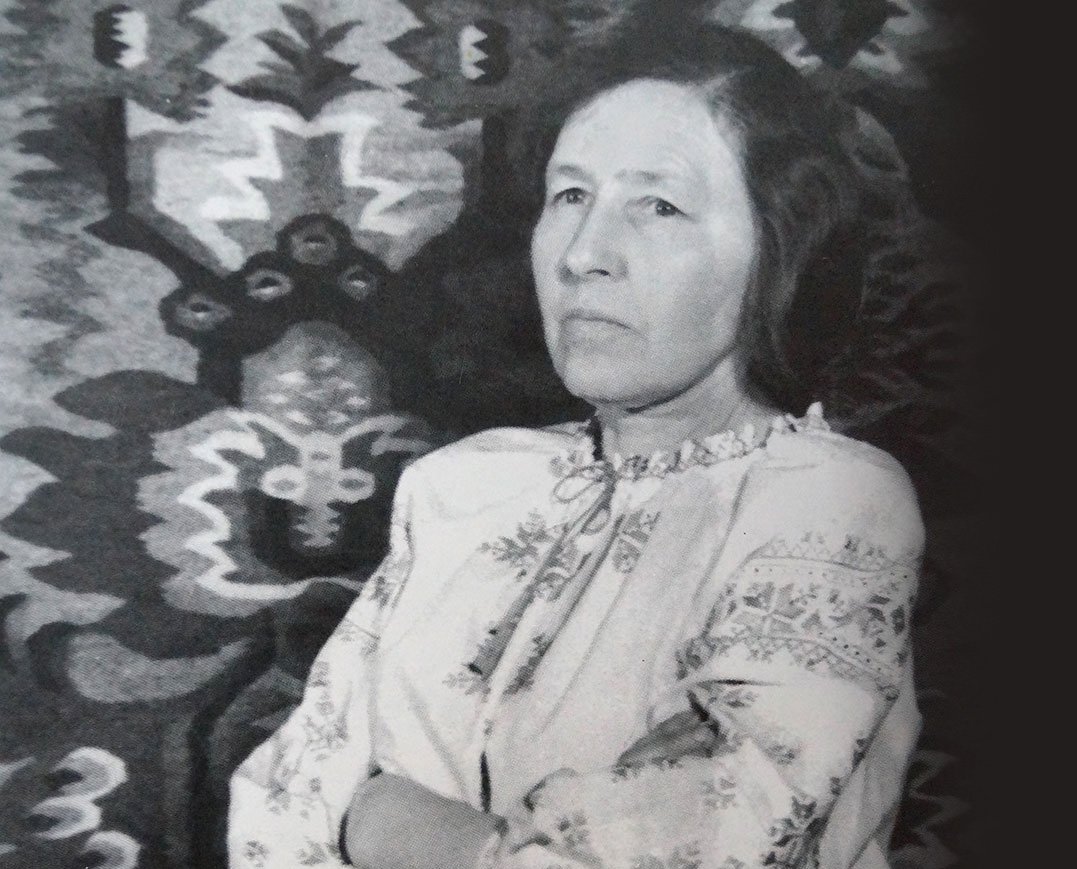 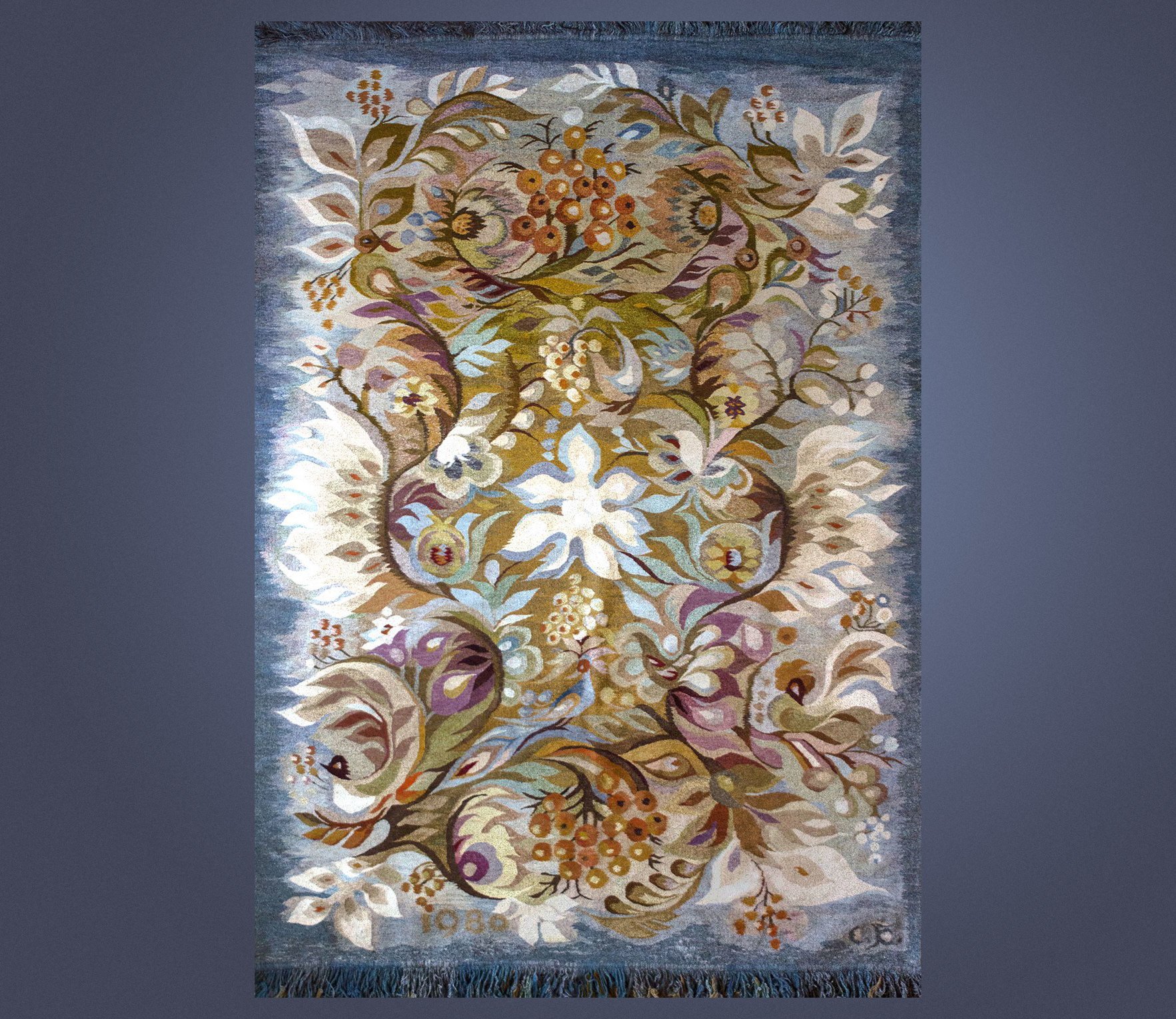 Nadiia Babenko worked as the main artist of the factory for a long time. The author's style of the master is easily recognizable in the riot of flowers, plants and branches. Her carpet "Tree of life" (1969), given as a gift from Ukraine, adorns the Blue hall of the main headquarters of the United Nations (New York). Leonid Tovstukha and Nadiia Babenko together with Hanna Bondarets and Domna Yefremova in 1986 became laureates of the state (now National) Taras Shevchenko prize of Ukraine.

Since 2005, the carpet by Leonid Tovstukha "Born by  the native land" has found its place in the hall of the Council of Europe in Strasbourg. In modern Reshetylivka, a home workshop of the artistic family of Piliuhin, a craft workshop "Solomiia" of Serhii Kolinchenko operate. Similarly, carpet art is taught at the art and vocational school in Reshetylivka. Traditions of Reshetylivka carpet are preserved in the works of the son of Nadiia Babenko - Oleksandr Babenko.

Traditions of plant carpet weaving of the settlement Reshetylivka of Reshetylivka district of Poltava region in 2017 were included in the national list of elements of intangible cultural heritage of Ukraine.