Singing Tradition of the Village Luka 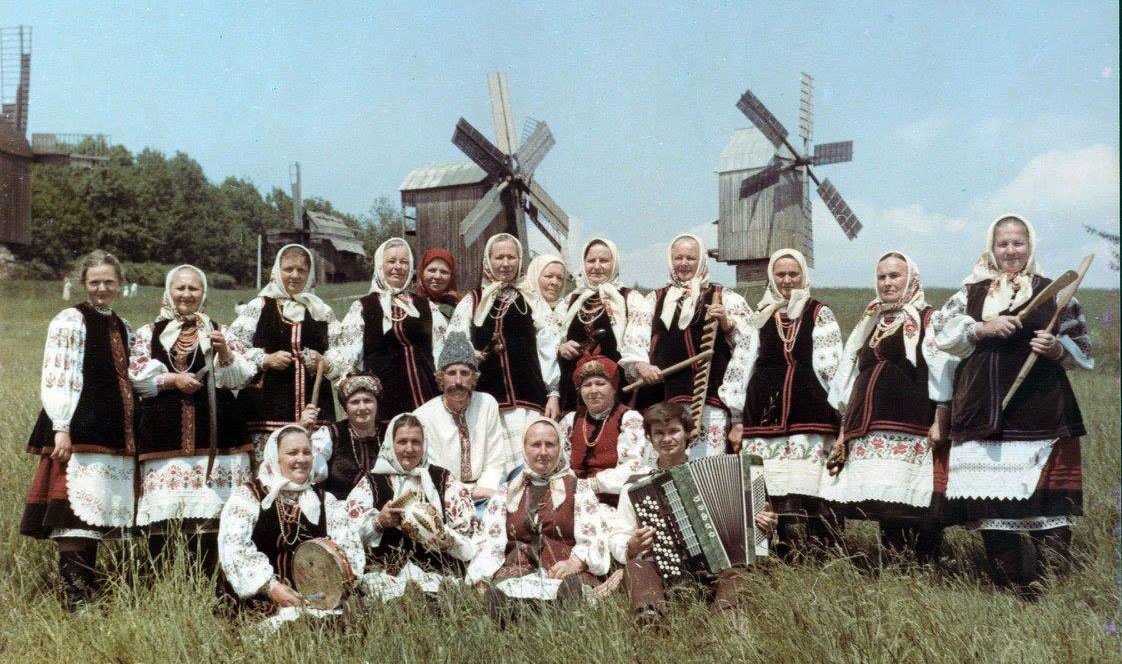 The village of Luka is located near the village of Bilohorodka (historical Bilohorod) near Kyiv. The village is located on the banks of the Irpin river. Its landmark is the Church of St. Nicholas, which can be seen from different parts of the village. On the territory of the village there is an important historical and landscape object - mountain Kochur, where the medieval village mentioned in the chronicles was located.

In the village of Luka, oral tradition preserved the songs of different genres: calendar and ritual (schedrivkas, carols, Kupala songs, petrivka songs) lyrical songs and ballads of the times of the Hetman, the Cossacks, agricultural laborers and orphan songs. The song tradition of  the village preserved over 70 wedding songs, including the unique ones "ladkannya" and “peredyrky” (wedding ceremonial songs), between bridesmaids, chanting songs and the like. For example, before baking  the loaf makers were singing:

The  loaf asks the cheesecake (perepych):
"Is the path to the oven far?
Give me a pie to lean on.
And to ask the way to the oven"

Household songs also make up a significant layer of song folklore of the village, they describe a variety of aspects of everyday life of a peasant.

The singing style of the village of Luka has the inherent style of Kyiv and Zhytomyr Polissia, but the local style of performance combines stylistic features of other regions. In particular, here sometimes there are elements of Poltava dialect (softening of words ending in “lia", "lio"). But in general, singing of Luka villagers has all the signs of the Naddniprianshchyna song tradition, namely: a lengthy style of performance, developed melody and chest sound.

Calendar and calendar–ceremonial songs of the village Luka mostly have heterophonic one- or two-voiced texture. Drawling songs predominantly have a three-voiced composition: upper and lower voice layers (“bottom” and “top”). Upper voice (“vyvid” – the name of the upper voice) in drawling songs is sung by one person, and the lower layer is occasionally split into two or more voices.

Studies of the song tradition of the village of Luka 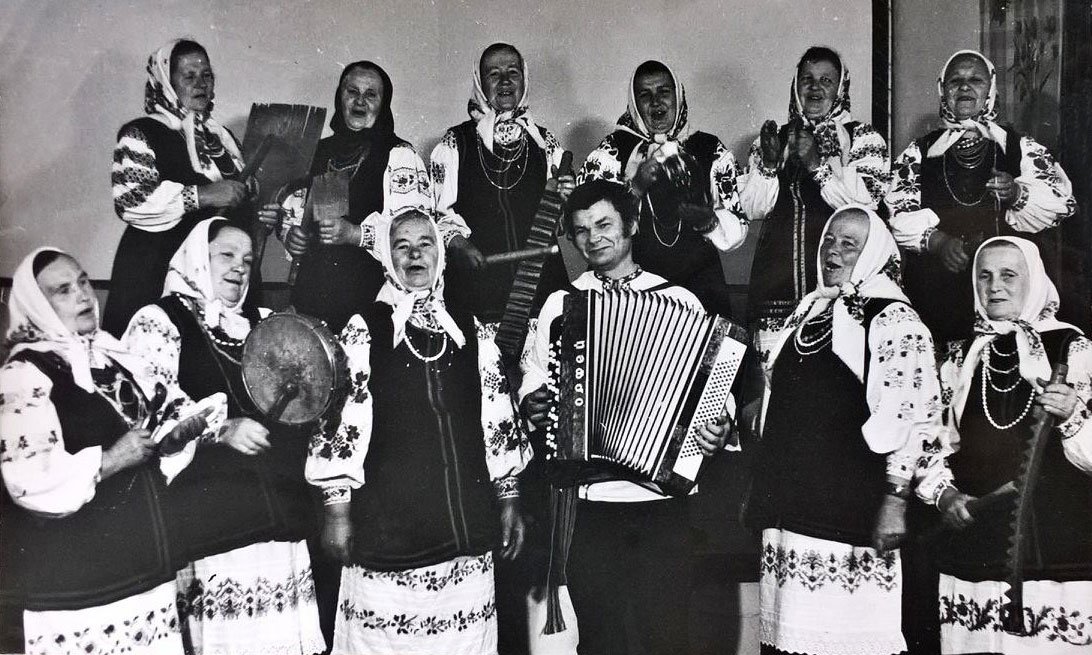 The national band in the 1980s

Melodic and lyrical songs of the Luka village constantly attracted the attention of researchers-folklorists. The most complete study of the song tradition of the village was carried out by Professor of the Kyiv National University, honored worker of the culture of Ukraine Ivan Pavlenko.

In 2009, he published the book "Song tradition of the village of Luka", which contains the most complete collection of folk art of this song community of Kyiv region. The researcher found more than 300 (285 of them published) songs of various genres, analyzed the genre-thematic and melodic-stylistic features of the local song performing art.

Bearers of the tradition 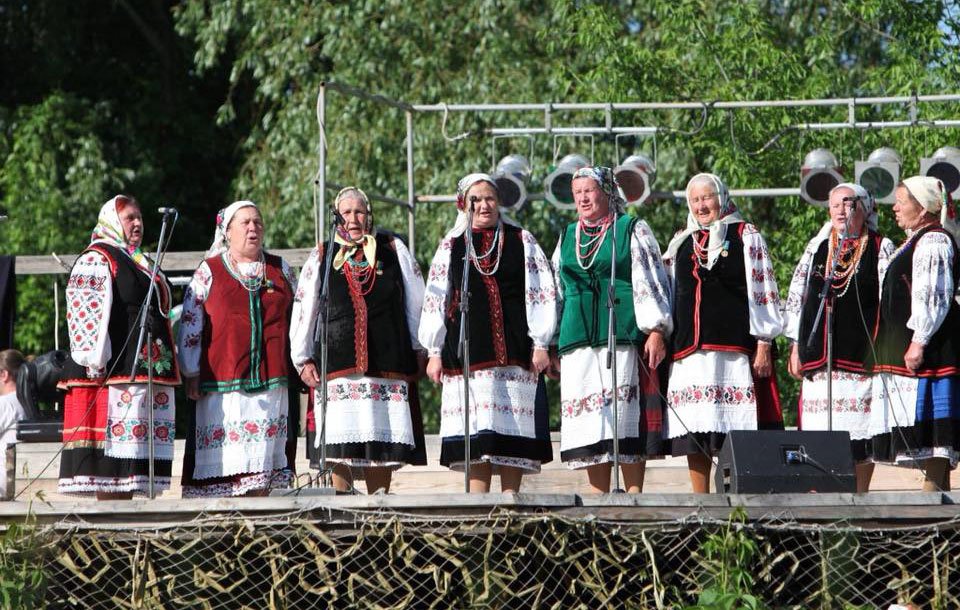 The performance of the band "Chervona Kalyna” 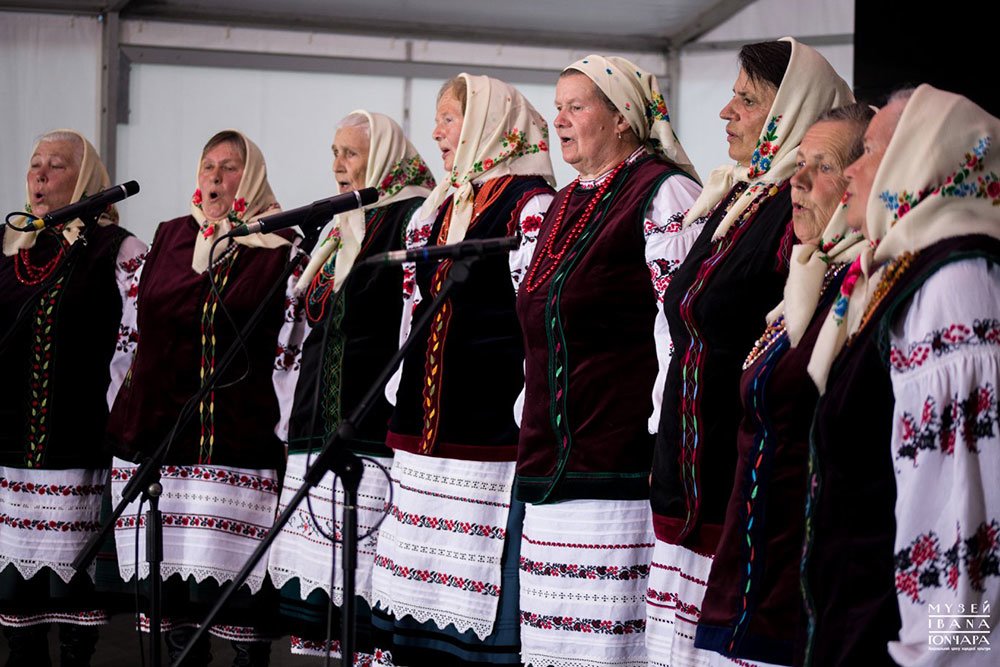 The band "Chervona Kalina" in the Museum of Ivan Honchar

The Singing Tradition of the Village Luka is preserved by the singing group "Chervona Kalyna", which includes the most talented folk singers of the village Luka, namely: Nadiya Yevheniivna Labunska (ensemble leader), Hanna Volodymyrivna Voloshyna, Oleksandra Semenivna Dmytrenko, Maria Fedorivna Popova, Pavlina Pavlivna Bila, Nadiya Vasylivna Zabudska, Zinaida Saveliivna Skopetska. Bringing these women together is a result of constant joint performance practice, as they sang before they joined the band and regardless of whether it was a concert performance by their band or just singing for themselves at a festive table. The age of the band members varies between 64 and 81 years. The band is based in the club of the village Luka and actively promotes folk songs in Kyiv region and far beyond.

The national band of the Luka village was formed in 1986. Until a certain time the group was headed by  Sofia Herasymenko (1923-2003). She kept a lot of folk songs and options of their performance in her memory. Today Nadiia Yevhenivna Lubanska is the head of the choir.

In the national band, there are several soloists, each of them has own individual style and own techniques of improvisation, making each component of the choir unique.

A significant part of the singers of the group are also members of the church choir, participating in the traditional ritual practices of the village (weddings, baptisms, funeral rites). The song heritage owned by the Chervona Kalyna band is passed orally from the senior members of the band and from the older generation in the family. The songs that have not been inherited before are now being studied by the band using audio recordings  previously made by folklorists.

During the performance of humorous and dance songs, the group "Chervona Kalyna" (Red vuburnim) uses different musical instruments as the accompaniment: accordion, harmonica and tambourine. Some songs are accompanied by handy items that perform the function of sound colorization, including wooden spoons; tara (wooden washboard); kosa (steel cloth for mowing grass).

Members of the band personally created their costumes stylized under the traditional Ukrainian attire.

The group’s distinctive feature is the variability of song performance manifested in the correct variability of the raise and vyvid in the musical contour. Almost every member of the group has their own pronounced individual style, their own arsenal of improvisation techniques in singing. This is most evident in the singing of Anna Voloshina, and Alexandra Dmitrenko and Nadezhda Labunskaya who’re singing ‘vyvid’.

The band has a folk style of singing. It exactly corresponds to the principle of sound formation and authentic stylistics, at the same time it is devoid of shouting and is very melodic. We can say that the band collectively reached the peak of performing folk songs, preserving the acquired knowledge of previous generations.
The songs of the band "Chervona Kalyna" are studied at music lessons at school, kindergarten in the villages Gorenichi and Muzychy.

Today the members of the folk group are frequent guests at various festivals and folk music venues in Ukraine. The skill of the Ukrainian band was appreciated  abroad, in particular at the festival "Baltika" in Lithuania.

In 2018, the song tradition of the village of Luka was included in the national list of elements of the intangible cultural heritage of Ukraine.