Pottery is a craft known in the Ukrainian territories for over 9 thousand years. Therefore, Ukraine is called a pottery country with its capital in Opishnia village (Poltava region). The products of Ukrainian craftsmen were popular in Europe since the nineteenth century and numerous in world arts collections.

Ukraine has its own "woven brand", which is originally from Polissia. It is "royal" woven towels that became popular 150 years ago and quickly spread throughout Ukraine.

Embroidery is the most common form of female manual craft. Ukraine`s showpiece is a Reshetylivka embroidery "white on white". One of the dresses complete in this technique by a local craftswoman was demonstrated in 1970 on the podium in Rome by the world-famous Italian actress Sophia Loren.

Knowledge, ancient traditions, technological skills, artistic styles, professional craft accumulated for centuries and artistic experience were passed from generation to generation all over Ukraine. That is why crafts express the continuity, identity and cultural diversity of a particular region or community.

The craft does not hang on your shoulders and does not ask for bread, but it gives bread

Folk craft is an integral part of the culture and life of the traditional Ukrainian society. On one hand, folk crafts are associated with the economy and development of natural resources, and on the other – it is a part of the spiritual culture of people, because they reflect the creativity and knowledge of people. Craft, that is, small-scale production by hand, served to meet personal household needs, at order or for selling. The geographical location of Ukraine, its natural resources contributed to the development of a large number of crafts. 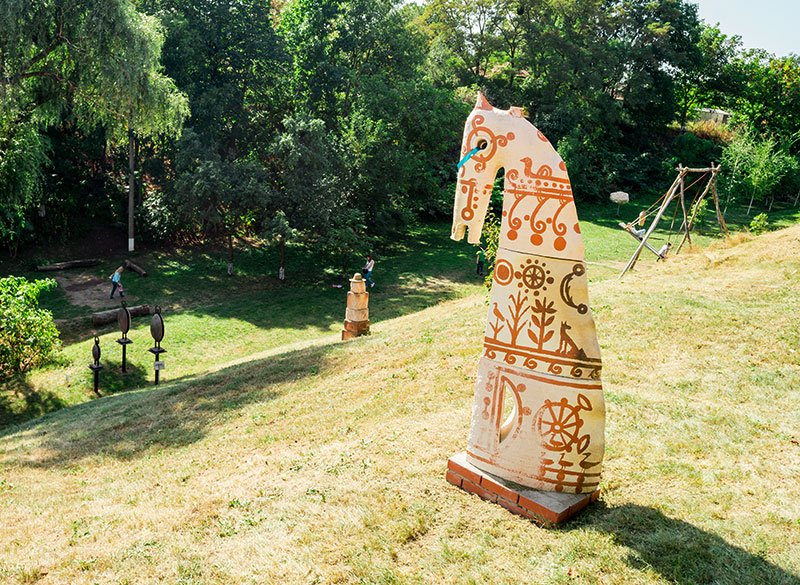 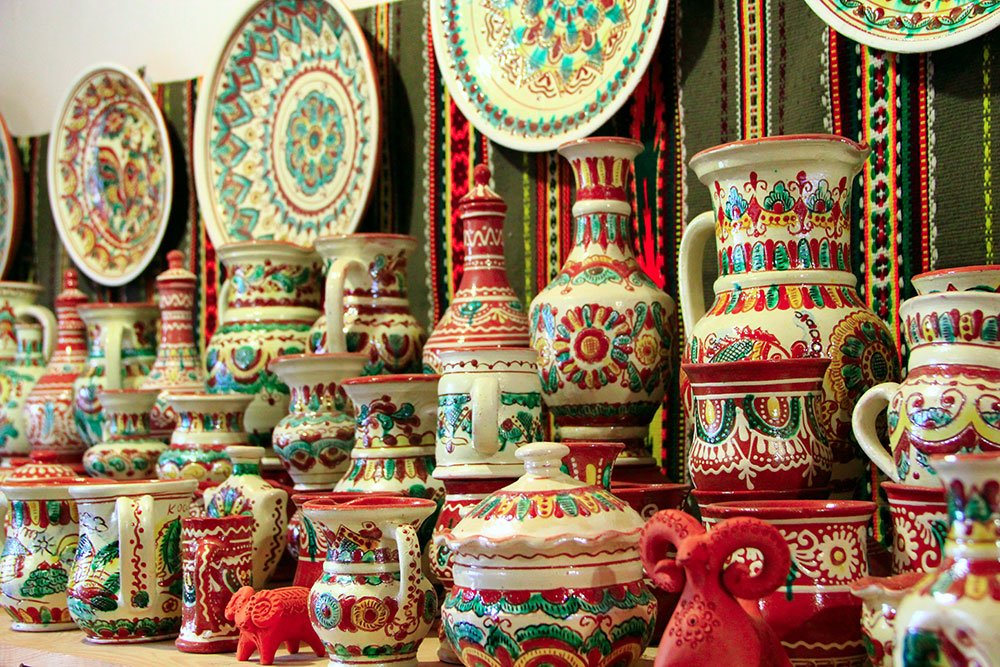 This well-known idioma reflects the millennial experience in pottery and skills of the craftsman. Pottery is the processing of clay and the manufacture of various kitchen utensils, as well as bricks, tiles, and other ceramics. On the territory of Ukraine pottery is known since the Neolithic (VII-V Millennium BC). On the hand potter's wheel, which appeared here in the II century N. E., the majority of ceramic ware in Kyivan Rus was made. In the XIV-XV century a  foot potter`s wheel began to be used. Pottery (due to the rich deposits of clay) was wide-spread throughout Ukraine (photo 8). A variety of dishes has always been produced here: pots, bowls and plates, jugs, barrels, baths, decorative dishes, children's toys etc. The largest pottery communities operating today are present in Opishne, Kosiv and Bubnivka villages. 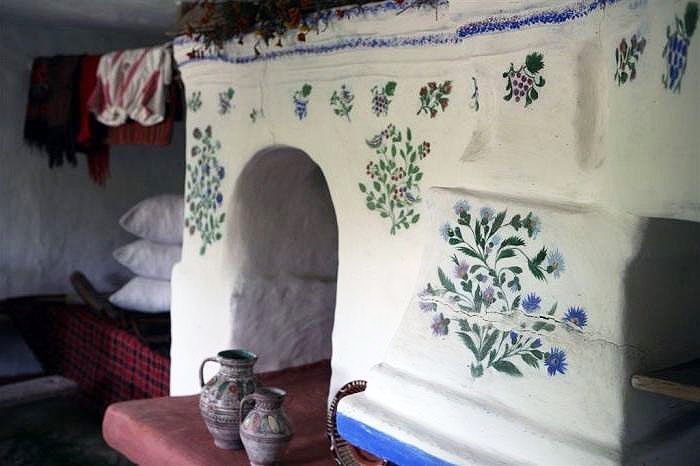 Wall painting of the furnace 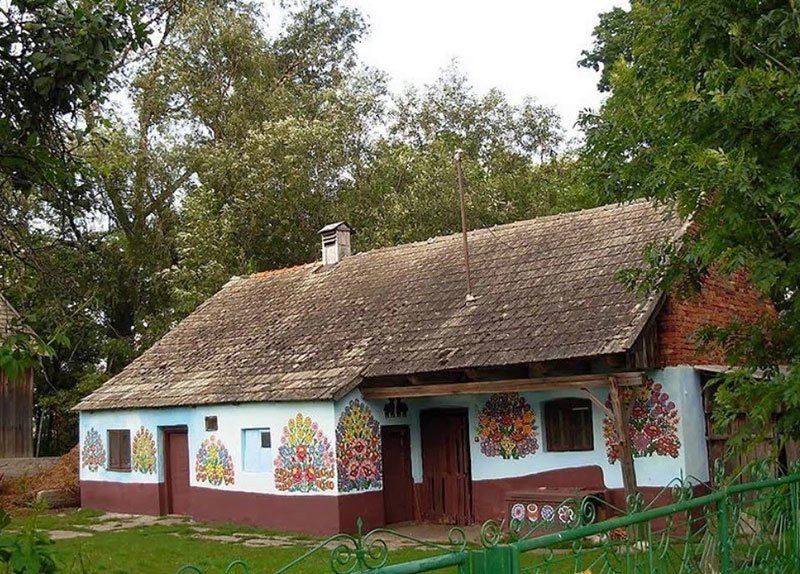 Picturesque Ukrainian homes, their colorful decoration can be often found in the works of Ukrainian writers and poets. What impressed the artists so much? There is no doubt: it is the decorative painting! The main type of decorative painting is wall painting. Women and girls painted houses outside: under the roof, like a frieze, around windows, doors and shutters. And the greatest attention was paid to the painting of the house inside, especially - of the oven, which was decorated with lush bouquets of flowers. People also painted the walls, which depicted the carpet, which was difficult to distinguish from the real woven. Decorative painting in the past was common in many parts of Ukraine, especially in Podillia region, Kyiv region, Slobozhanshchyna, Bukovyna, but it was  the most widespread in the Petrykivka village of current Dnipropetrovsk region, known as Petrykivka painting. 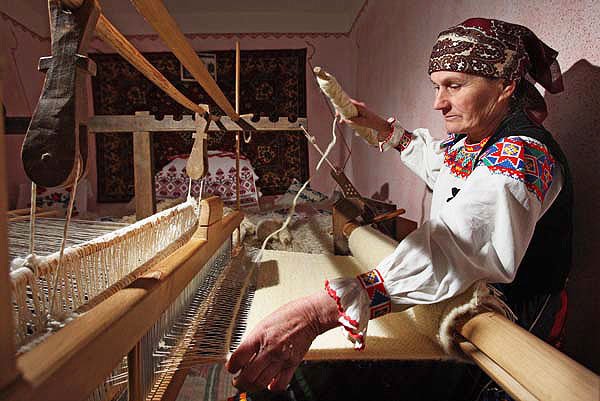 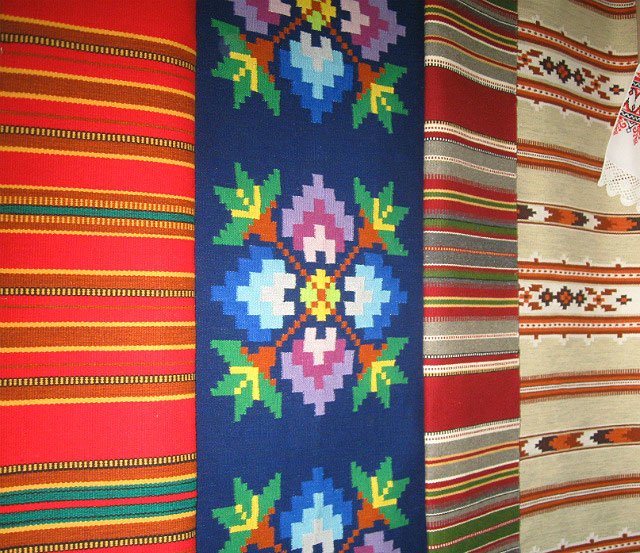 Boguslav wool rugs by Valentyna Tkach and her family members 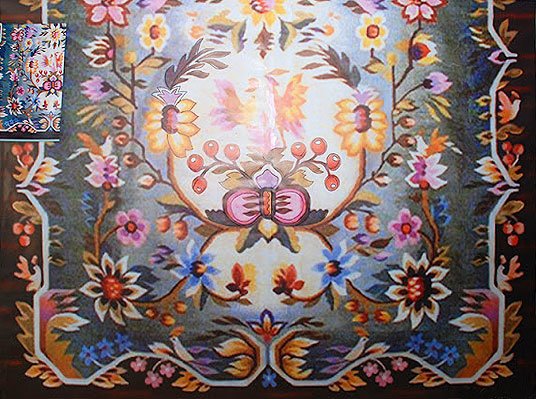 Weaving was an important craft of every Ukrainian family – people produced  linen, towels, shawls, covers for benches, paths and carpets. The main materials for weaving included  flax, hemp and wool. Ukrainian weavers worked on machines of two types: vertical ("krosna" and "rozboi") and horizontal. Products were decorated with geometrized ornaments: transverse bands, diamonds, stars, rosettes, stylized images of flowers and birds. The most famous center of weaving towels since the XV century is the town of Krolevets of Sumy region. In the XIX century the following regions were also famous for weaving: Slobozhanshchyna, Kyiv region (Boguslavskii carpet), Poltava region (Reshetylivka carpet, Podillia and Volyn. In addition to popular carpets from the ХVIII century, the so-called aristocratic carpets and tapestries appeared too. 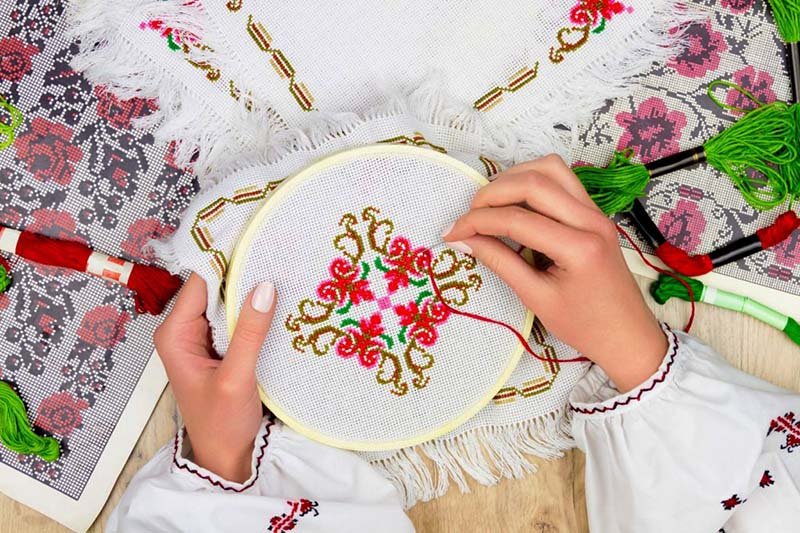 Embroidery of the regions of Ukraine 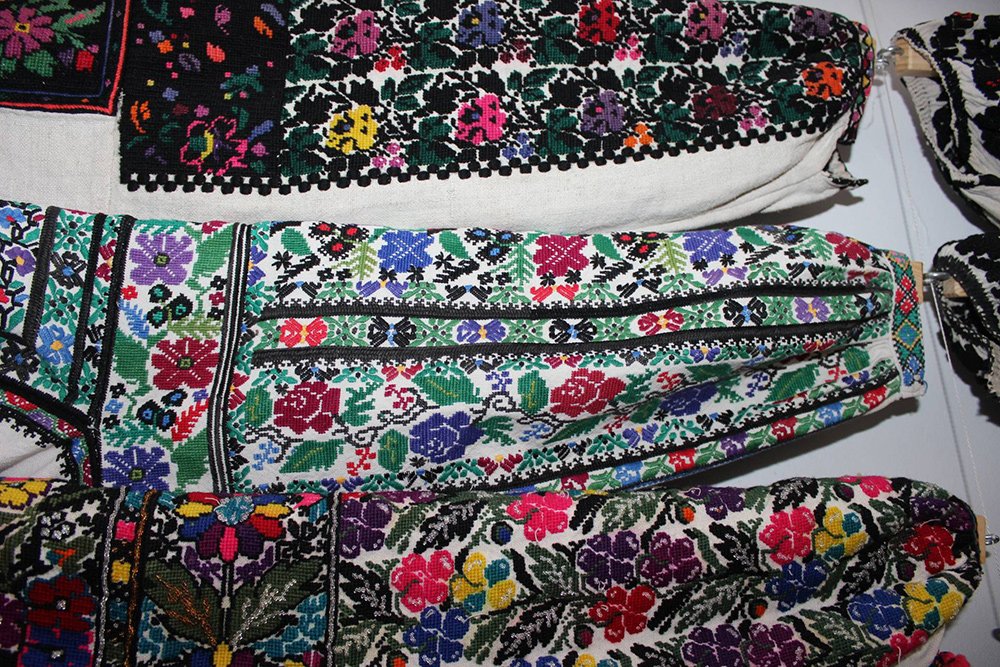 «Don't be lazy, young lady, embroider shirts and towels – and there will be something to meet the guests with»

Embroidery has always been the most common form of women's manual craft. Women embroidered in each village, in monasteries, nobility and merchant communities. In the XIX-XX centuries educational and handicraft workshops, art and industrial unions, large specialized enterprises on embroidery were opened. Embroidery as an amulet decorated primarily women's and men's shirts, as well as covers for beds, abrasions, pillow cases and towels. In Ukraine, there were about 100 types and techniques of embroidery: smooth surface, cross, nyz, drawn-thread work, traveller and weaving. The most common are geometric and floral ornaments with local differences. The most outstanding and well-known style of Ukraine is Reshetylivka  embroidery "white on white". 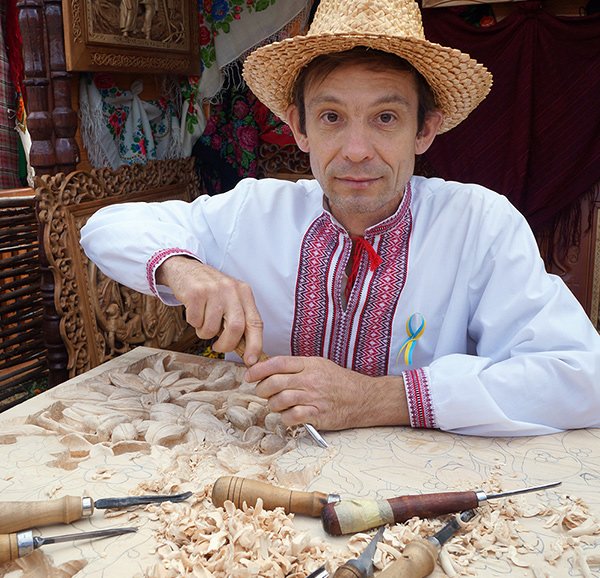 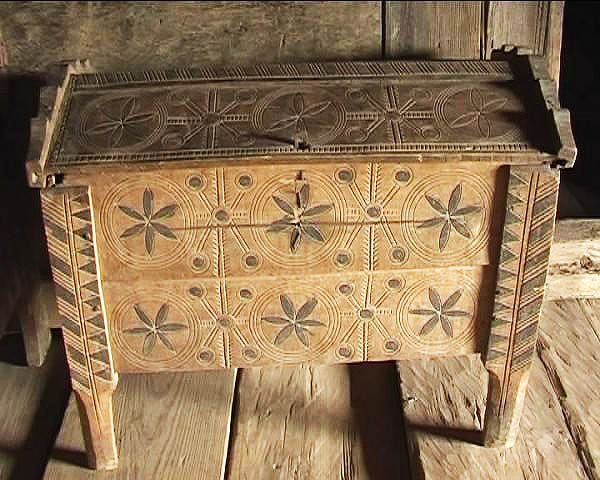 «Carving is not only a craft, it is necessary to give yourself all, give your mind and soul warmth...»

Ancient Slavs were famous for art wood carving since the XI century. The art wood carving gained the highest level in Ukraine in the XVIII-XIX centuries. It was used for the decoration of the parts of buildings: doorways, beams, architraves and shutters. Special attention was paid to the carving of a ceiling beam. They also decorated items and household goods: chests, tables, beds, shelves, places for bowls; roadside crosses and sledges. 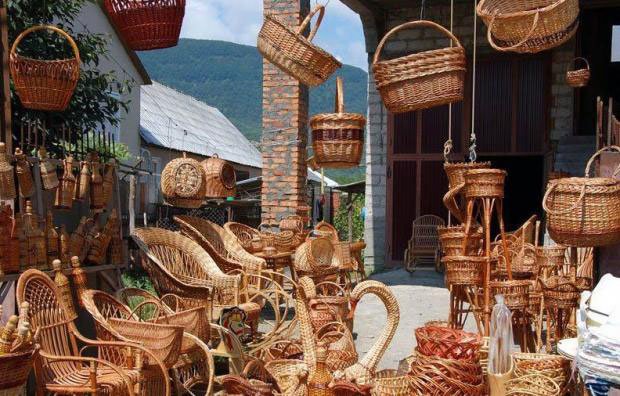 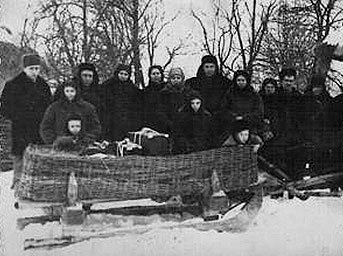 Wicker weaving is really the art of "living vine", because there is no better material for weaving than willow twigs. Many household and art products for storage, transportation and carrying of products can be made from it. It was also used for making fences, barns, building, furniture, small items and toys. Traces of this craft on modern Ukrainian territory were  found by archaeologists in the Neolithic. The oldest monuments of Ukrainian weaving of the late XVIII century are kept in museums in Kyiv, Lviv and other cities. The process of weaving is quite long and laborious. 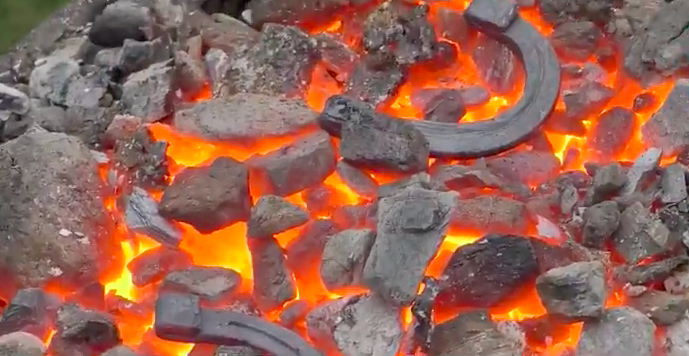 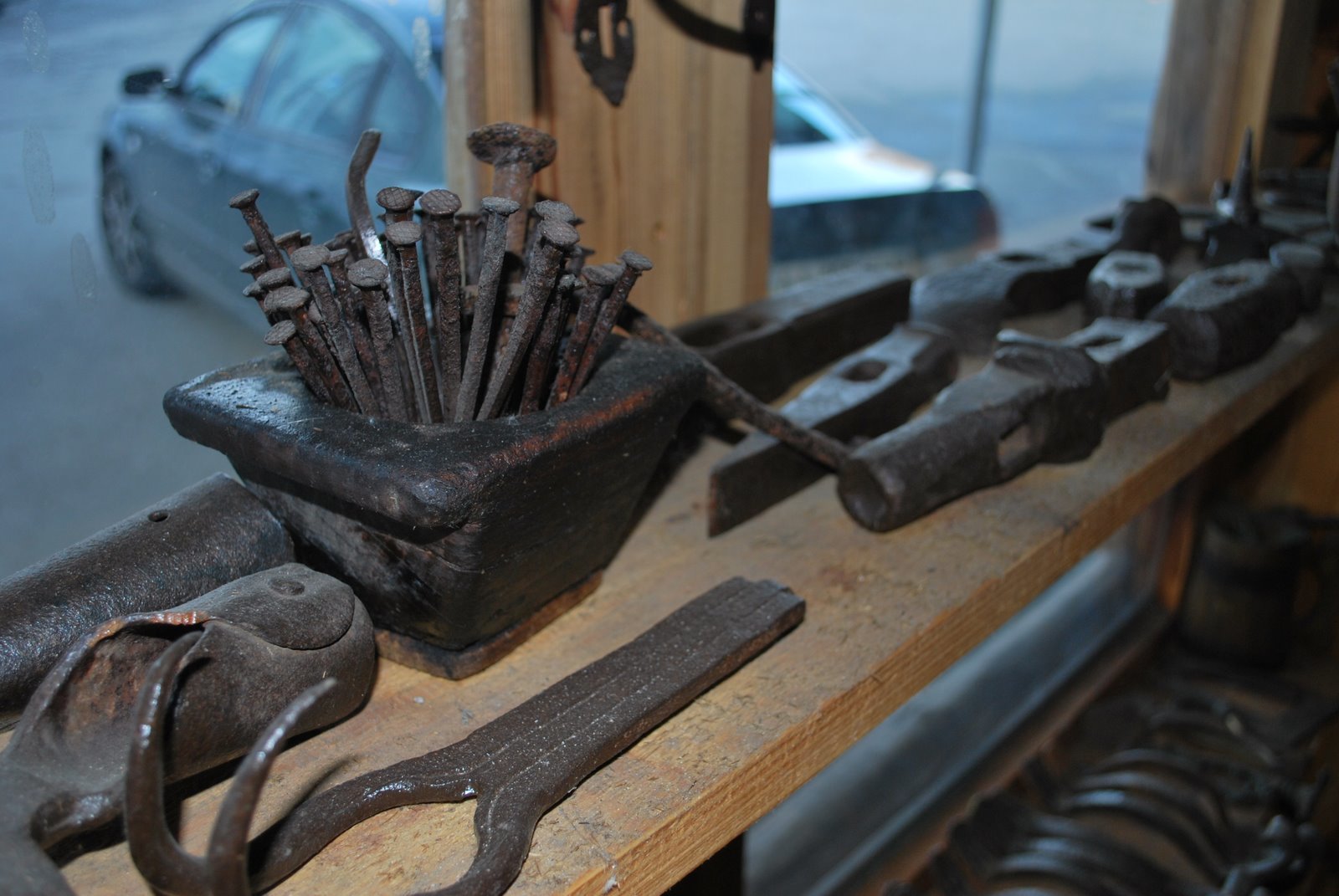 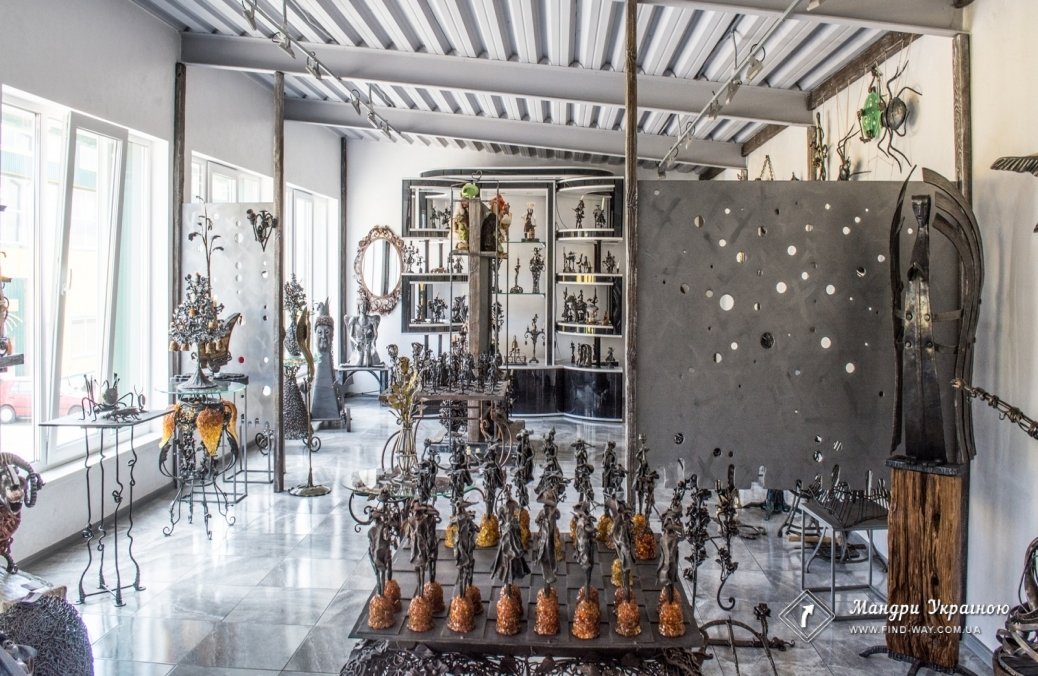 «When there is the ice outside, it is the best time for a blacksmith»

Blacksmith craft has always been a prestigious occupation, and blacksmiths were always treated as valuable masters, which is confirmed by folk proverbs and sayings. Blacksmith is a metal processing by means of hot forging. On the territory of Ukraine in the XVIII-XIX century on the outskirts of almost every village smitheries were located. Blacksmiths have long made weapons and various household items (axes, knives, hammers, shovels, choppers, ploughshares, nails, locks, latches, iron gates and fences, stirrups, etc.), as well as they shod horses and fettered carts. Among the Hutsuls it was common to produce jewelry and other small household items from non-ferrous metals. In cities there were  craftsmen making needles, watches and jewellery (goldsmiths). 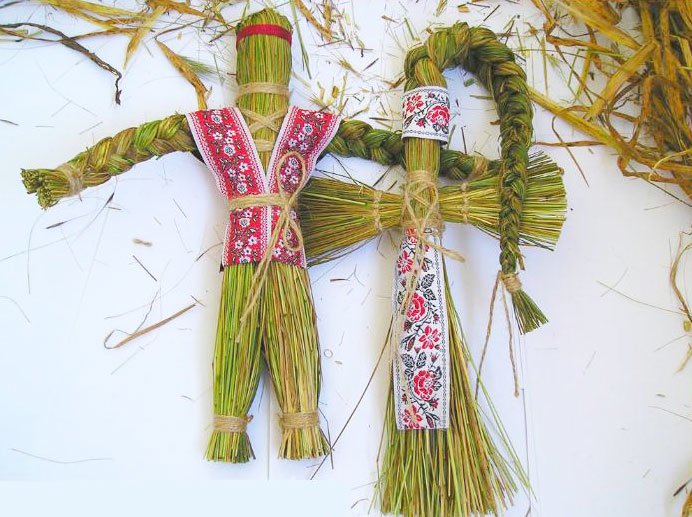 Dolls made of grass 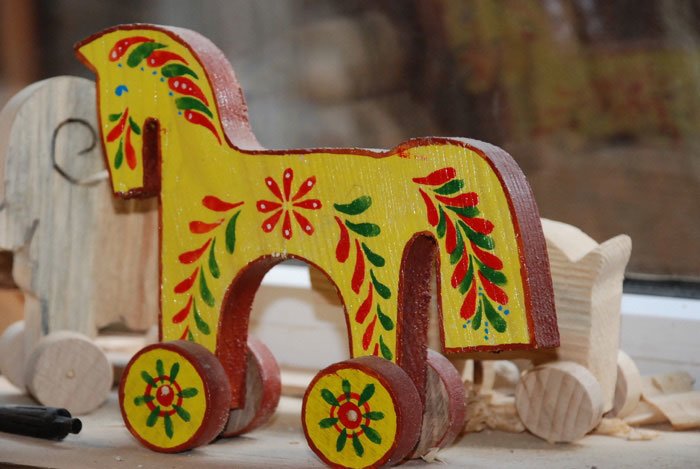 Wooden toys in the city of Yavoriv, Lviv region 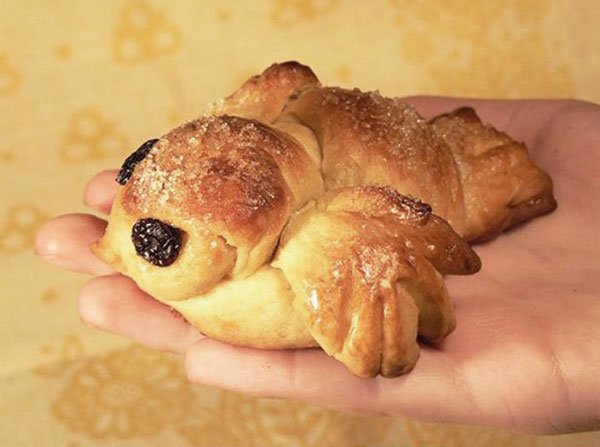 "Lark". Toy made of dough

«Any bauble of folly will keep a baby jolly»

Toy is a special product of Ukrainian folk art. This is something without which it is impossible to imagine childhood, the game, so Ukrainians paid special attention  to the production of toys, they used a variety of materials, they bought them and made at home. With the development of fair trade in the late XVIII century in Ukraine mass production of toys for sale began. Mostly ceramic and wood samples of the XIX century were saved till nowadays: dolls, birds, strollers, skates, furniture, spinning tops, windmills; mechanical toys; puzzles ("moroka"); rattles ("hyhychky"). Most wooden toys were produced in the Carpathian region, in Yavoriv. Besides bought toys, every Ukrainian family made toys themselves  of twigs, straw, grass, paraffin, bone, tissue, in Carpathian Ukraine – they were  even made out of the dough and sheep cheese. 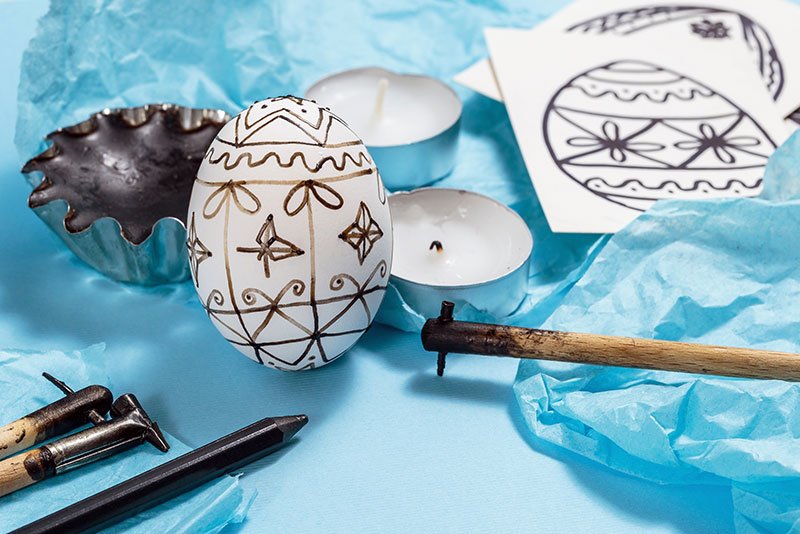 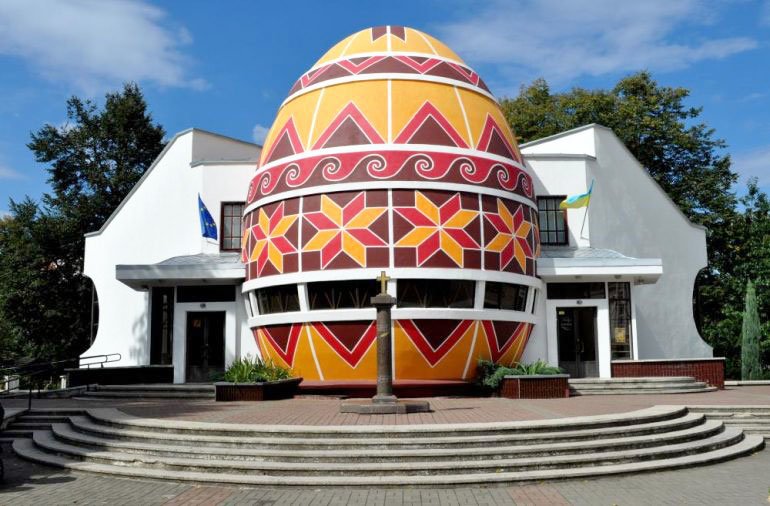 The Museum of Easter eggs paintings "Pysanka" in Kolomyia 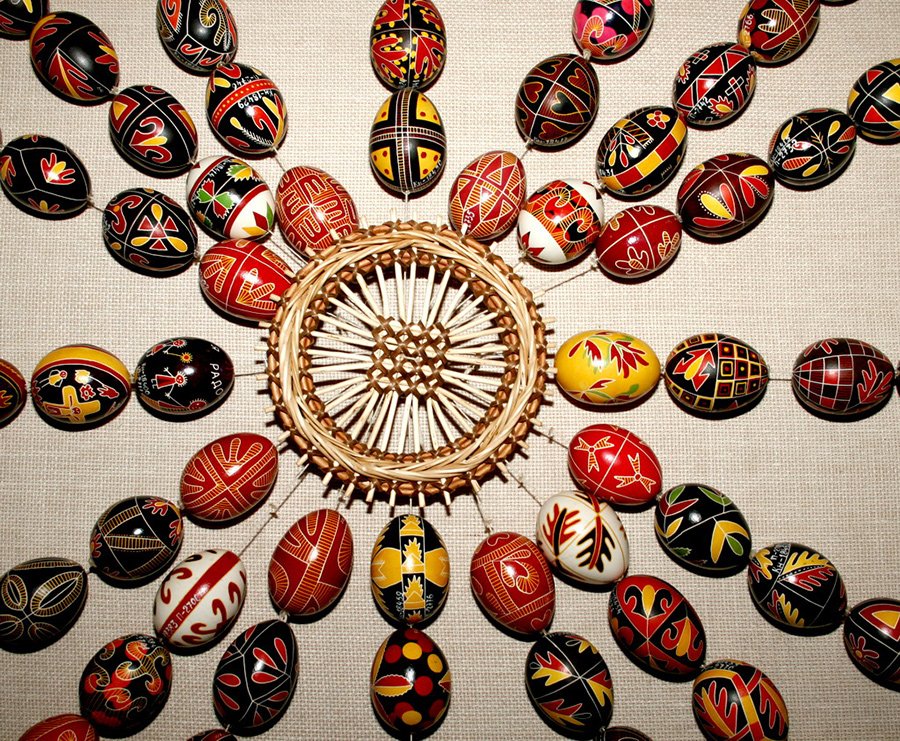 Pysankas from the collection of the Pysanka Museum. Kolomyia, Ivano-Frankivsk region

«Oh, Easter egg! You're a symbol of Ukraine, A symbol of life and peace eternal Protecting Mother…»

Easter egg is a raw egg decorated with traditional symbols with wax and paints. Easter eggs as an art form is widespread among many nations of the world and it originated long before Christianity. In mythology, the egg is the source of life and the universe; a symbol of the Sun; spring revival. Therefore, Easter eggs were made as amulets in the spring, before Easter. On the territory of Ukraine cult eggs were found in the graves of the Scythians, in the Eastern Crimea (IV century BC). Mass egg painting on the whole territory of Ukraine has existed for a long time and had its local differences, as evidenced by the ancient collection of Ukrainian Easter eggs in museums of Kyiv, Lubny, Lviv, Kolomyia, Krakow, Warsaw and Brno. Easter eggs were mainly made for own usage  and only occasionally - for sale at the fair.