On the banks of the picturesque river Hovtva, in the Poltava region, there is the town of Reshetylivka  - one of the most famous modern centers of folk crafts of Ukraine, which came into bloom in the XIX century. 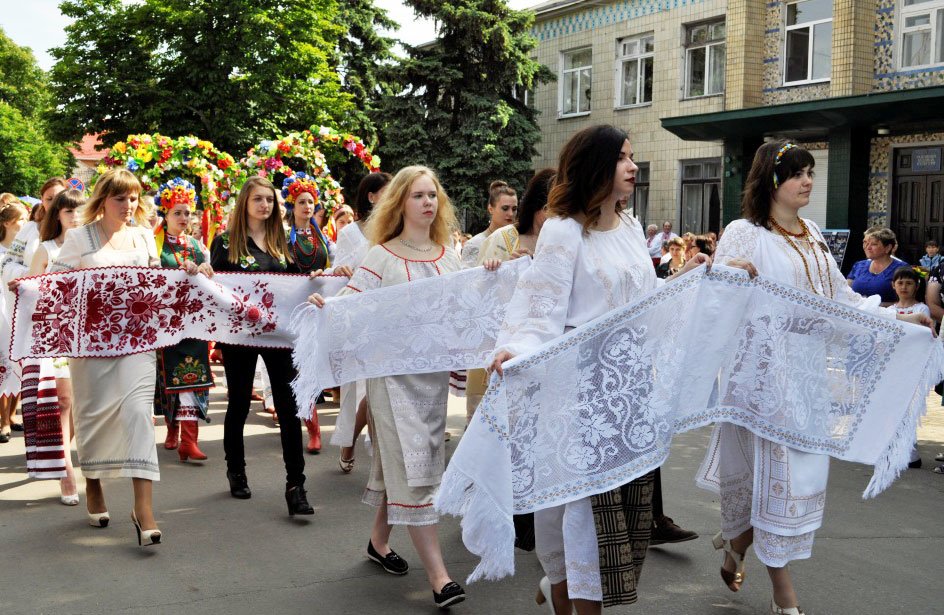 There the tradition to embroider with white threads on white fabric, known as the technology of embroidery "white on white", or "bil", was born. Scholars believe that the name of the Reshetylivka comes from the saying "to make holes in the cloth". This process means masking the joints when joining two parts of cloth holes made in fabric (drawn-thread work). Bil embroidery has existed for as long since fabric and plain weave exist.

One of the earliest examples of the ornament with white hemstitch, in combination with making holes and drawn-thread work can be seen in Chernihiv towel dated 1746. Today this towel is stored in the Chernihiv History Museum. Over time, this original embroidery has spread in all ethnographic regions of Ukraine and become a hallmark of Poltava and a brand for Ukrainian culture. Whitework embroidery is designed both for perception from a far and for longer close examination. This unravels all the richness and beauty of the patterns, the precision of execution. 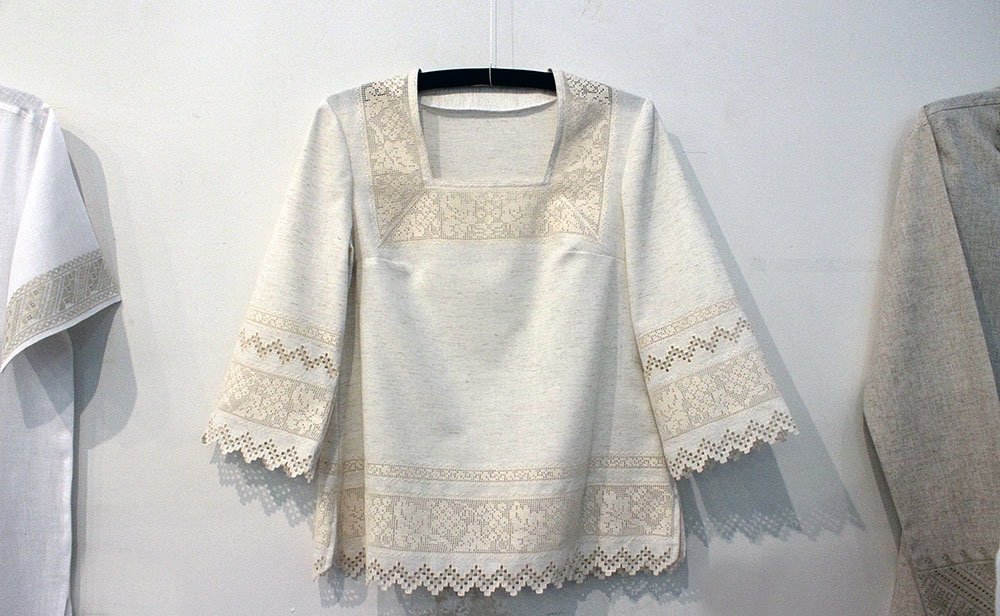 Embroidered garments by N.Ipatii at the exhibition in the Ivan Honchar museum in Kiev
Ivan Honchar Museum 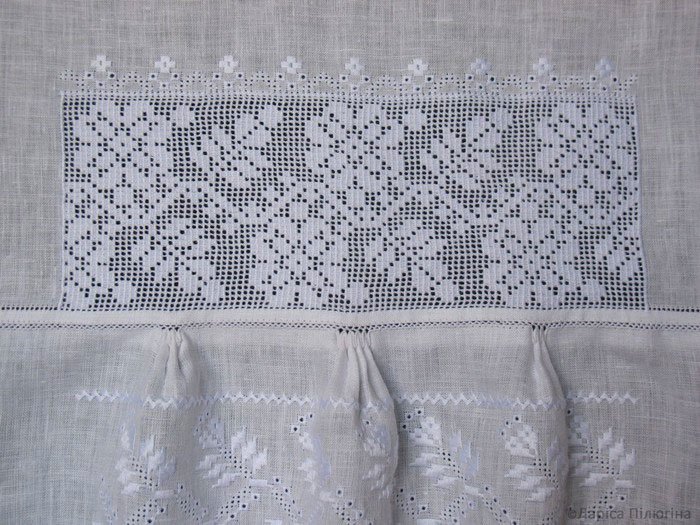 Traditionally, “bil” was used to embroider towels, as well as festive, wedding men's and women's shirts. Today they still are made of thin transparent fabrics-linen, voile, batiste, silk.

The peculiarity of  Reshetylivka  embroidery is a combination of floral and geometric patterns – "periwinkle", "hop", "moroka", "kuriachyi brid", "zozulka", the most favorite – "branch" and "broken wood". The geometric ornament consists of the simplest figures: oblique and straight cross, square, rhombus, triangle and star motifs. A special feature is the simultaneous combination of five to seven techniques: "lyshva" different types "hemstitch", "cut", "puncturing", and, especially, jewelry techniques "nightingale eyes” and "grain output" which enriches the artistic means of expression of ornamental compositions, so it resembles a miniature, which makes it recognizable among other embroidery in Ukraine.

For contrast, craftsmen add unbleached yarns or yarns  dyed in ash colors. This embroidery creates a high relief pattern with black and white modeling. Depending on the direction of the light, the pattern differently reflects and  absorbs the light, creating its rich play.

«We pass this tradition from immemorial time, our mothers were able to embroider, and our children have learned from us.»
(embroidery craftswoman N. Ipatii) 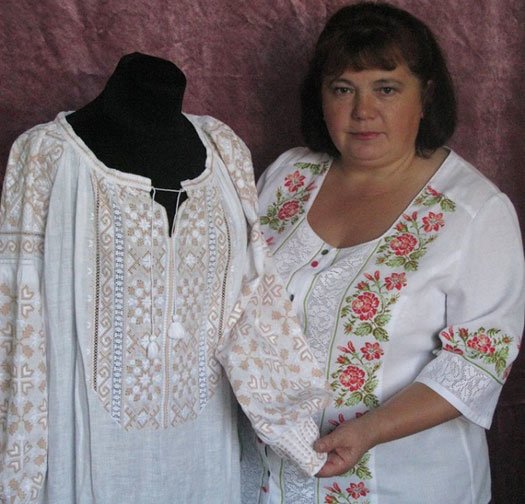 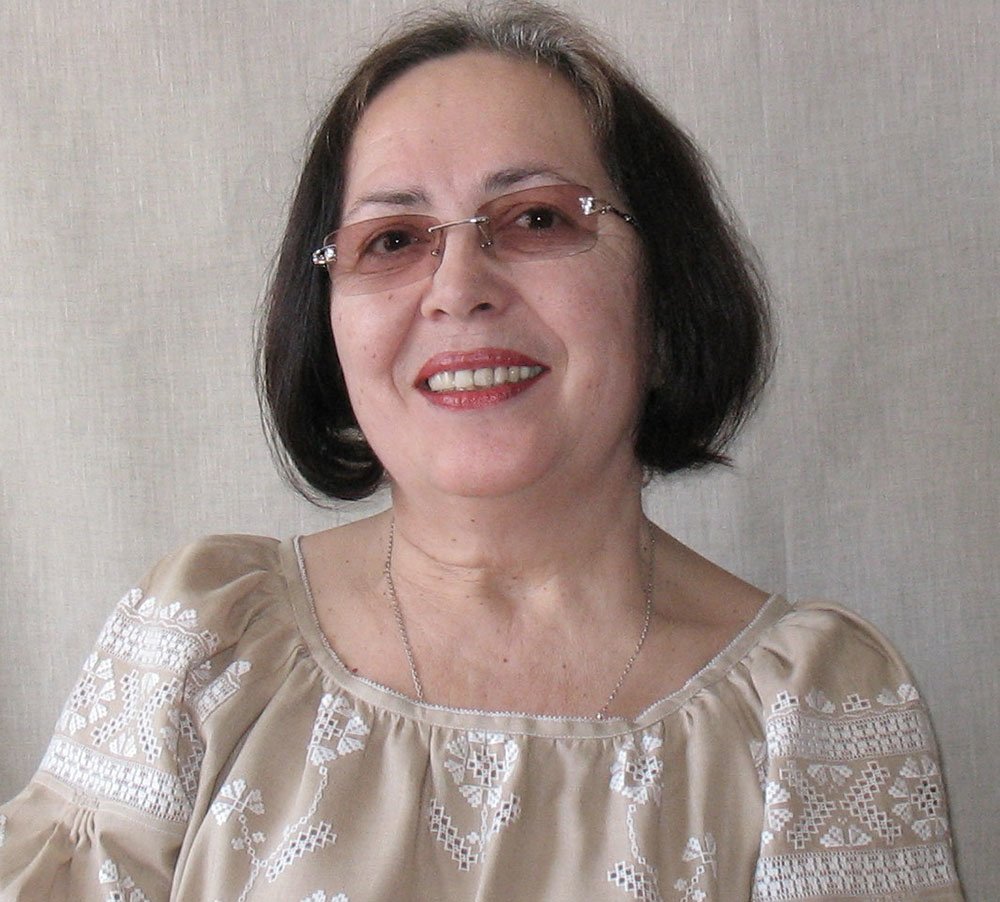 At the end of the XIX century Reshetylivka  officially became one of the centers of folk weaving, carpet weaving  and embroidery in Ukraine. In 1905, the Governor and Council there founded the cooperative for embroidery and tapestry – Reshetylivka  weaving training and demonstration center, on basis of which in 1922 the art and industrial cooperative "Troianda" (Eng - rose flower) and embroidery shop were formed. Starting from 1926 – a cooperative named after  Klara Tsetkin functioned there.

The city has about ten private workshops. Modern embroiderers, Nadiia Vakulenko, Larysa Piliuhina and Nina Ipatii, state that it is very difficult to embroider with white threads on white cloth, especially for the eyes, because the ornament is never applied to the fabric immediately.

First, the craftsman draws the "picture" on paper, and then, by a complex calculation, transfers the picture to the canvas. Such hard work takes from two to six months to complete one garment.

Secrets of the craft

Mastering the traditional techniques of the whitework embroidery  is time-consuming, troublesome, so the secrets of the craft are learned from an early age. The classic technique of satin stitch embroidery is "satin stitch" or "platband", as it is called in Reshetylivka. The platband demands exact calculation of threads. An error in one thread violates the integrity of the pattern as a whole. The pattern is embroidered with a single platband, but is often combined with openwork techniques. Platbands help to create geometrized plant motifs typical for embroidery.

Each element is made independently, which allows masters to use individual motifs to make a variety of compositional patterns, especially when embroidering the sleeves of women's shirts - sometimes with several rows of floral ornaments, sometimes with certain motifs combined and scattered. This technique allows you to get only geometric patterns. There are also many drawn thread work techniques for decorating. The techniques include and resemble  "column", "buckwheat", "oatmeal", "meadow", "gerdan", "rod with covering", "chesnytsia (the tenth part of the strand) net", "net without chesnytsia", "cutwork". Ornamental compositions made of mesh are found both geometric and plant-geometrized.

The plant-geometric motifs of the "drawn-thread" work are characterized by a tortuous branch with leaves and flowers. Merezhka - one of the interesting means of decorating the fabric. It creates an artistic contrast of openwork patterns with canvas and embossed surface embroidery.

Another common technique is weaving. Needle-weaving means 1, 3, 5, or even more square holes. The pattern is tightly lined with threads, the middle is then cut out, which forms clear openwork squares on the canvas. This technique exists as an independent, but is often combined with others.

When whitework or same-color embroidering a chiaroscuro effect high relief pattern is formed. Whether the embroidery thread was laid horizontally or vertically, the pattern reflects and absorbs light in different ways. Reshetyliv whitework embroidery is a form of artistic tool that is associated with the beauty of frosty patterns.

Аncient technique "cutwork" is very common in Reshetylivka. It  was used to decorate the towels and a variety of products. This technique belongs to the transparent-counting-rod group of techniques, ie networks. But the difference between a drawnwork and a "cutwork" is that in the drawnwork the threads of the fabric are pulled only in one direction, ie horizontal or vertical, and in the "cutwork" - in both directions.

Reshetylivka travels around the world 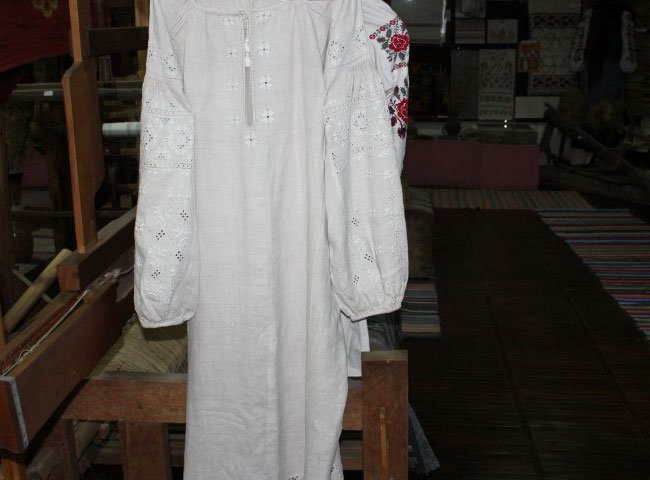 Back in the 1920s, the town gained world fame at the exhibitions of Ukrainian art in Munich, Paris, Marseille and Brussels. It is interesting that once a writer and ethnographer Olena Pchilka had to present at the competition in Paris the embroidery in "bil" technique completed by the carftsmen of Reshetylivka factory. When people did not believe that it was the work of human hands, O. Pchilka brought the carftsmen, that simply amazed the jury.

Reshetylivka craftsmen in 1969 produced a dress in the "white on white" technique for the world famous Italian actress Sophia Loren for the film "Sunflowers" (1970). This movie shooting location was chosen to be the village of Chernechyi Yar near Dykanka in Poltava region. Then the actress demonstrated this dress on the podium in Rome. Now a copy of Sophia Loren`s shirt  is kept in Reshetylivka Museum.

Nevertheless, beside the glory of Reshetylivka, there is an acute problem of the young craftsmen. Therefore, in February 2018, the technology of embroidery "white on white" of the  Reshetylivka village of Reshetylivka district of Poltava region was included in the national list of elements of intangible cultural heritage of Ukraine, which stipulates an implementation of measures for its protection by Reshetylivka Art Professional Lyceum.

This webpage uses the materials of the Reshetylivka Museum of Local Lore, the websites http://reshetylivka.com.ua/, http://gobelen.in.ua/ and the photographs by embroiderers Larysa Piliugina, Nina Ipatii and Nadiia Vakulenko.