The tradition of hand-drawn ceramics of Kosiv 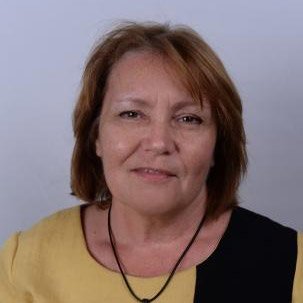 Head of the Department of scientific work of the National Museum of Ukrainian folk decorative art. Historian. In 1973 she graduated from Taras Shevchenko National University of Kyiv.

Preserved from the end of the XVIII century the traditions of Kosiv painted pottery are an integral part of the intangible cultural heritage of Hutsuls, an ethnographic group of Ukrainians who have long lived in the Ukrainian Carpathians. 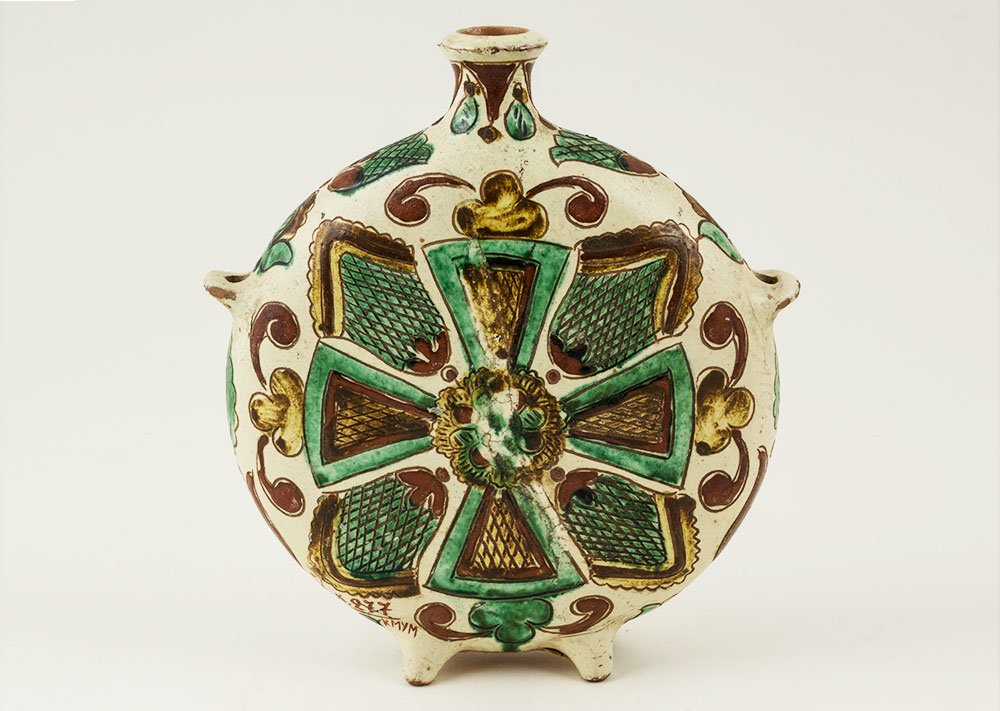 The traditions are now widespread in Kosiv and nearby villages: Pistyn, Verbovets, Stary Kosiv and Kutiv. This region's pottery has been known since the XV-XVI centuries. Over the centuries, traditions, skills, and creative techniques have been passed down from generation to generation. The role of the main center of folk pottery in the XVIII century was first played by the village Pistyn. The tradition also developed in the foothills centers: Kosiv (with the villages of Monastyrske, Moskalivka, Stary Kosiv, Smodne, Verbovets), the villages of Kugi and Stary Kugi. It had its own ceramic school, its own style and its own tradition.

The plots of paintings of the Pistyn craftsmen are closer to the folk primitive, and the favorite motifs of the ornament are triangles and their combinations that cover the walls of the vessels and edges of the bowls. Since the XIX century the center of pottery moved to Kosiv. It formed the recognizable features of the Kosiv ceramics:

In the second half of the XX century, manufactures were created. Today the tradition is developing in two directions: small-scale shop production and private creative ateliers.

What and how was produced 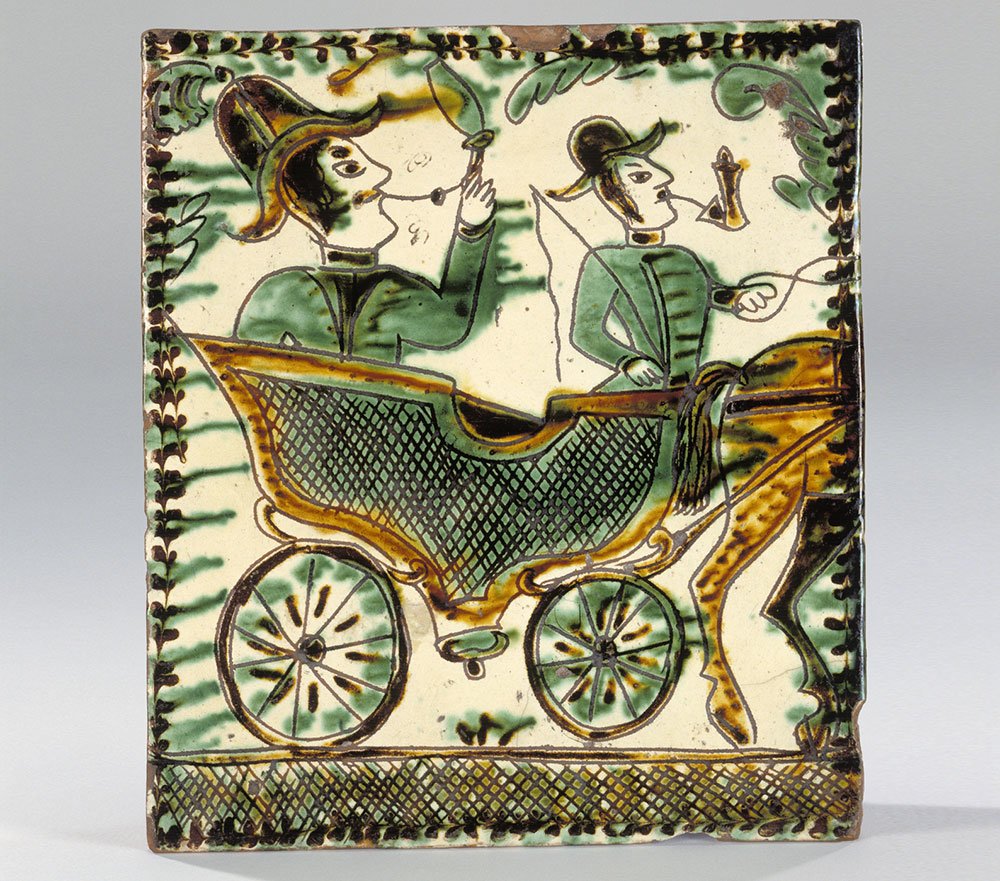 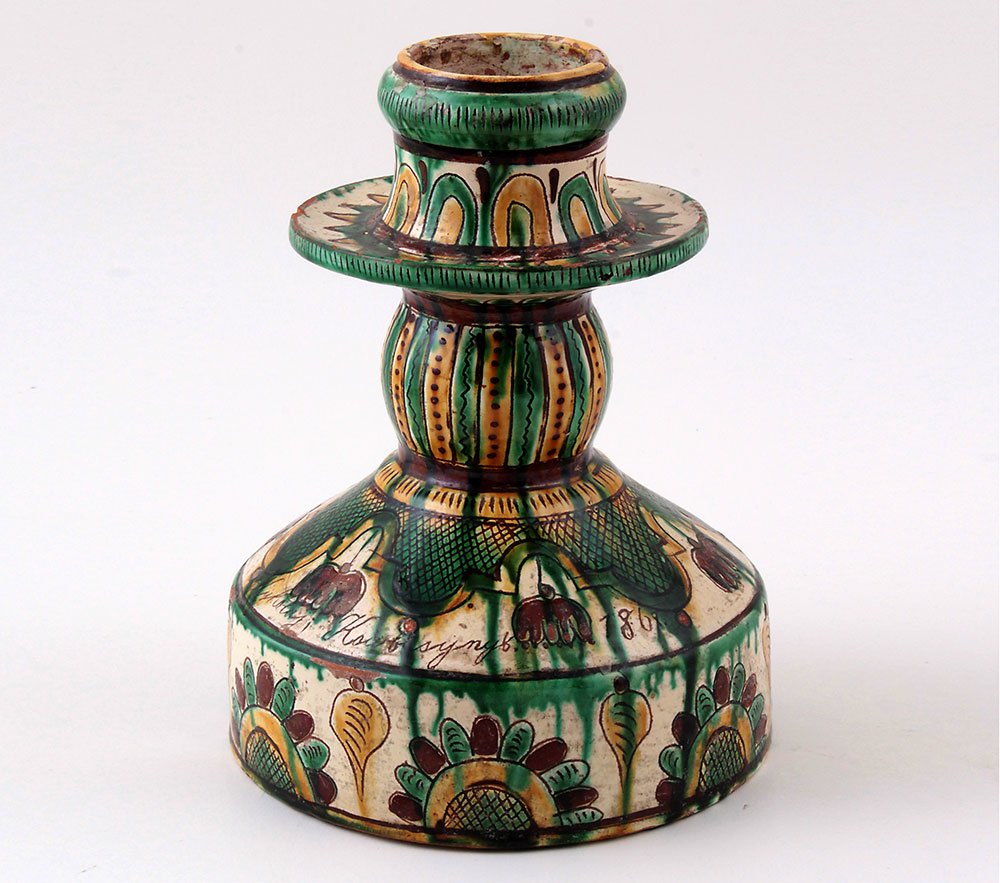 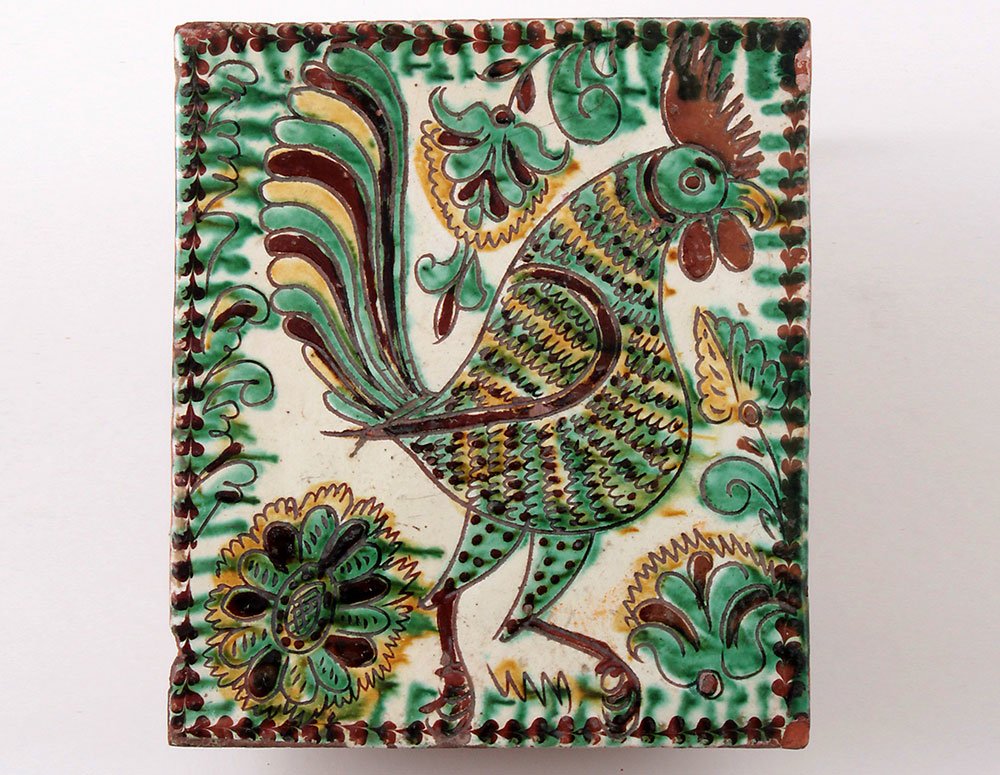 The main feature of pottery is that it is man-made. This is the uniqueness of each ceramic work. Most of the products were made by potters on the potter's wheel and these objects included mainly applied dishes made of local raw materials - clay of dark gray color, which when put into pottery kiln discovered a red tint. The product formed on a potter's machine or glued was slightly dried and the surface was watered with "whitewash" (white clay) brought from the central and eastern regions of Ukraine. The clay has this particular name as it was used to whitewash a house or a stove. "Whitewash" was rubbed or ground in drums with water, bringing it to the desired density, filtered, and then watered the product. Then the dishes were dried to such a state that the "whitewash" did not stick to hands. That's the way the product was prepared for painting. Technological traditions have been preserved through ages.

The basis for a bright decorative system of Hutsul ceramics in the early nineteenth century was rytuvannia (the engraved painting). With this technique, the product is fully covered with a thin layer of white clay, and the outline of the ornament was painted on the dried white background, its planes were filled with brown engobe and burned for the first time. Because of this, gray clay is visible on a white background, forming a graphic pattern. Counter-relief lines are the tiny ditches formed by the scribe. They serve to ensure that the dyes do not spread on the potsherd during firing. After that, the object was painted with ceramic paints of yellow and green colors, covered with glaze and burned again. In the decoration of utensils another interesting tool was used– flow mottles: targeted towards the spot of green glaze they added dynamism to a composition.

The tricolor color scheme of the products (including yellow, green and brown colors) is a feature of Kosiv ceramics that is associated with the perception of nature: yellow symbolizes the sun, green symbolizes the Carpathian mountains, and brown symbolizes the Earth. Sometimes masters add blue to the tricolor range. A special feature of "tradition" on ceramic products is the reflection of the life of Hutsuls, their beliefs, traditional way of life (by means of naive painting).

Besides the tableware forms usual for Ukraine, vessels for wine were made in Subcarpathia region – clay pots of flaky shape, banks for liquid, narrow jars for oil and ring-shaped vases. Large candlestick for one candle is a special, inherent only in the Subcarpathia region ceramic form (postavnyk), which was presented to the Church by parishioners.

Kahlia (a jug) was also produced on the rectangular space of which the crafters reflected the surrounding events – the work of the peasants, entertainment and holidays, the lordly retreats, riders, musicians and dancers, hunting scenes and various animals (deer, lion, bear, rooster, fish, etc.). Thus the Chronicles of local life were created.

The plots of religious content were common on the tiles: church buildings, crosses and images of saints.

Carriers of tradition. Outstanding craftsmen of Pistyn  and Kosiv 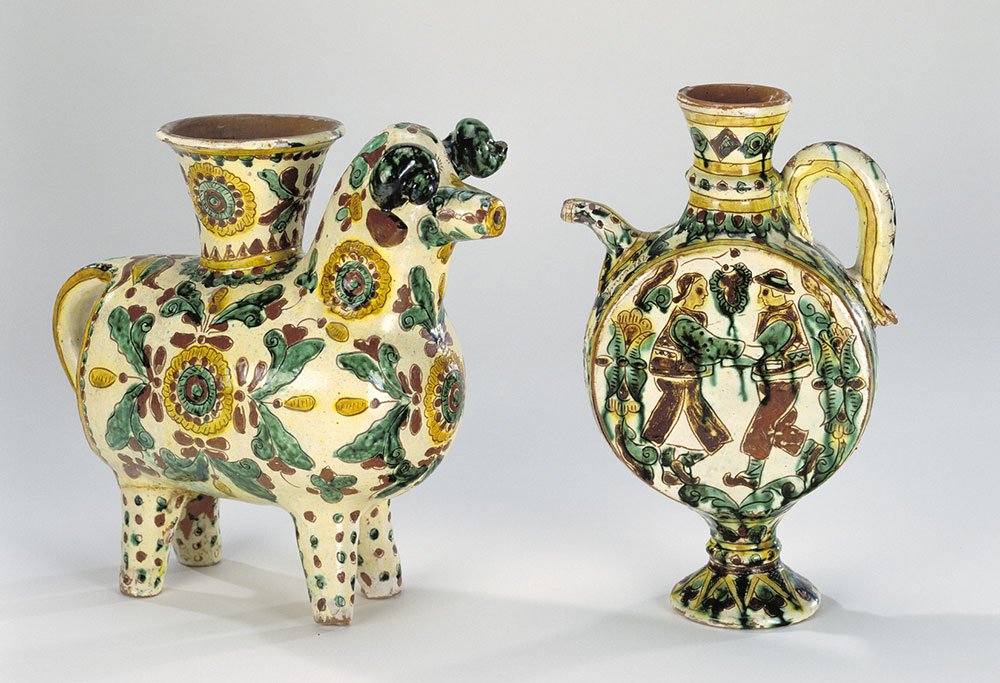 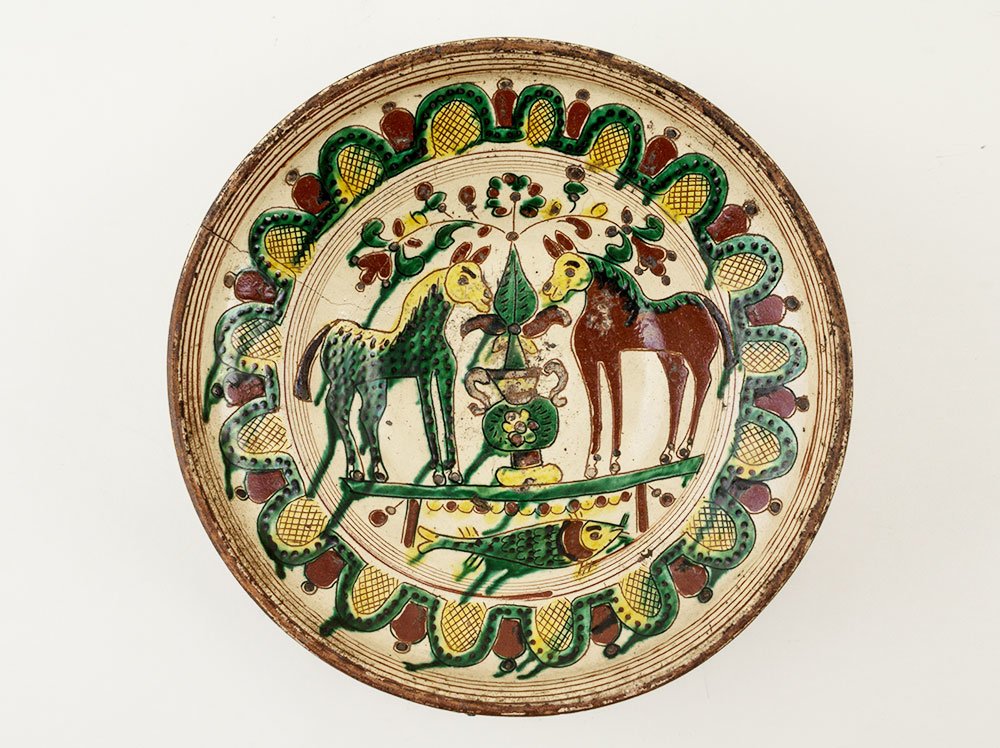 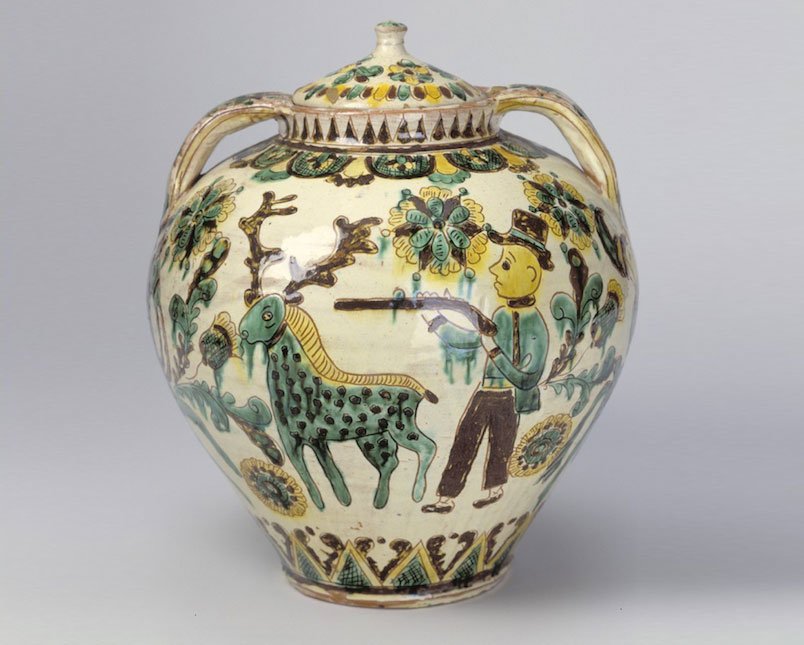 The development of ceramics of Pistyn is associated with the works of Zintiuk dynasty, in particular of Dmytro, whose years of intensive work included 1840-1865. Petro  Koshak (1860-1942) is a well-known representative of the late generation of Pistyn craftsmen.

The feature of creativity of the outstanding craftsman of the Kosiv ceramics Mykhaylo Baraniuk (1834-1902) from Moskalivka which is near Kosiv was the central arrangement of drawing, symmetric and balanced composition. Slender ornamental motifs are adherent to the works of Yosyp Baraniuk (1863-1942), the last of the great craftsmen of Moskalivka.

The craftsman of Kosiv ceramics of the third quarter of the XIX century Oleksa Bakhmatiuk (1820-1882) enriched the tradition of Kosiv hand-drawn ceramics with a new element - the so-called Bakhmatiuk flower: its middle is an ellipse filled with partial letters and surrounded by dots. Around the flower, there is a halo which is a yellow stripe, bounded by a toothed line. Bakhmatiuk’s works were exhibited in Vienna in 1873 and Lviv in 1877. Visiting the exhibition in Coloma in 1880, the Austrian Emperor Franz Joseph bought a whole furnace made by the craftsman.

Craftsmen of the second half of the XX century, Pavlyna Tsvilyk (1891-1964), Viktoria Voloshchuk (1932) and Nadiia Verbivska (1929) continued developing traditions of Kosiv ceramics. Their works are rich both in form and painting.

In 2015 Kosiv painted pottery was presented in Athens (Greece) showcased by workshops and an art exhibition by the Trotsy family and five-year-old A. Slava. Annual ethnic festivals are held in the Kosiv region, including the Ludyne Fest and the Painted Jug (originally Malʹovanyy dzbanyk), which bring together a large number of ceramics fans.

In 2016, the traditions of Kosiv hand-drawn ceramics were included in the national list of elements of the intangible cultural heritage of Ukraine.