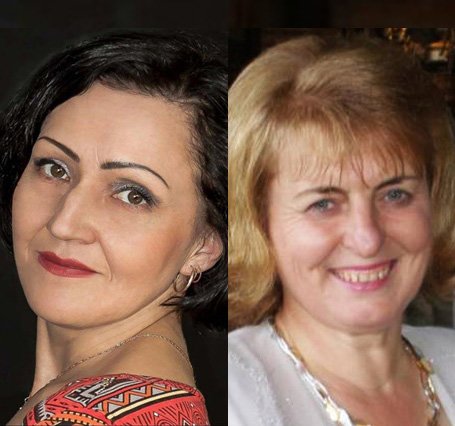 Samchykivsky painting (or samchykivka) as a form of Ukrainian decorative and applied art originated in the late XIX - early XX centuries. in the village of Samchyky, Starokostiantyniv district, Khmelnytsky region, and spread to south-eastern Volyn, on the border with Podillya. 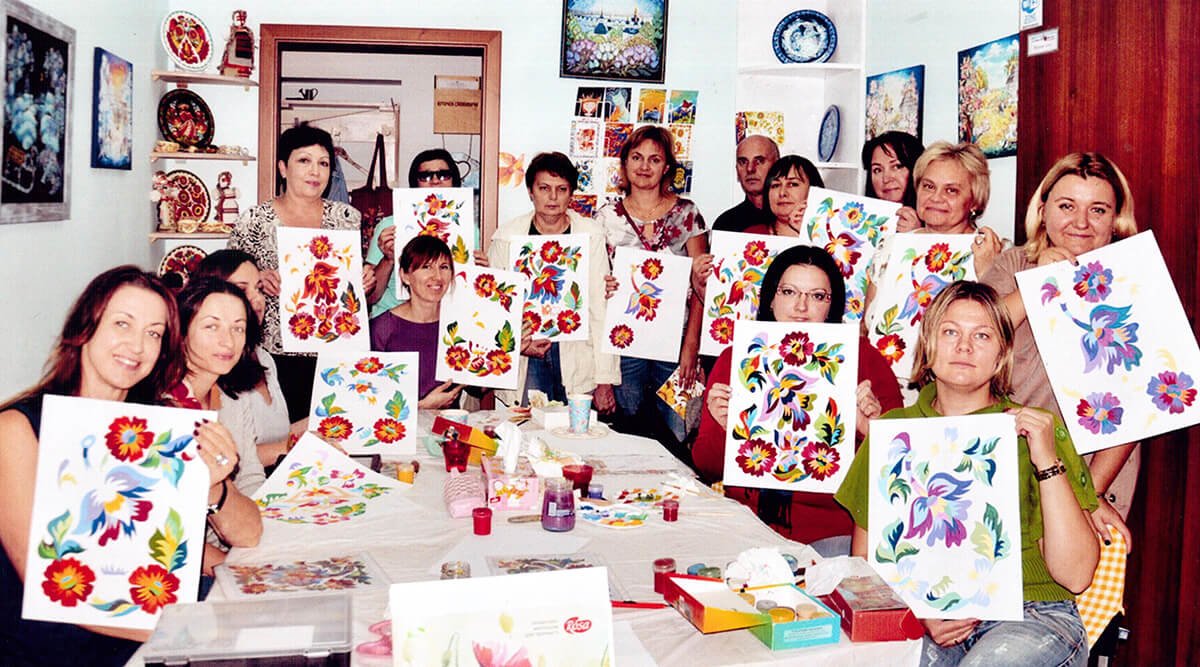 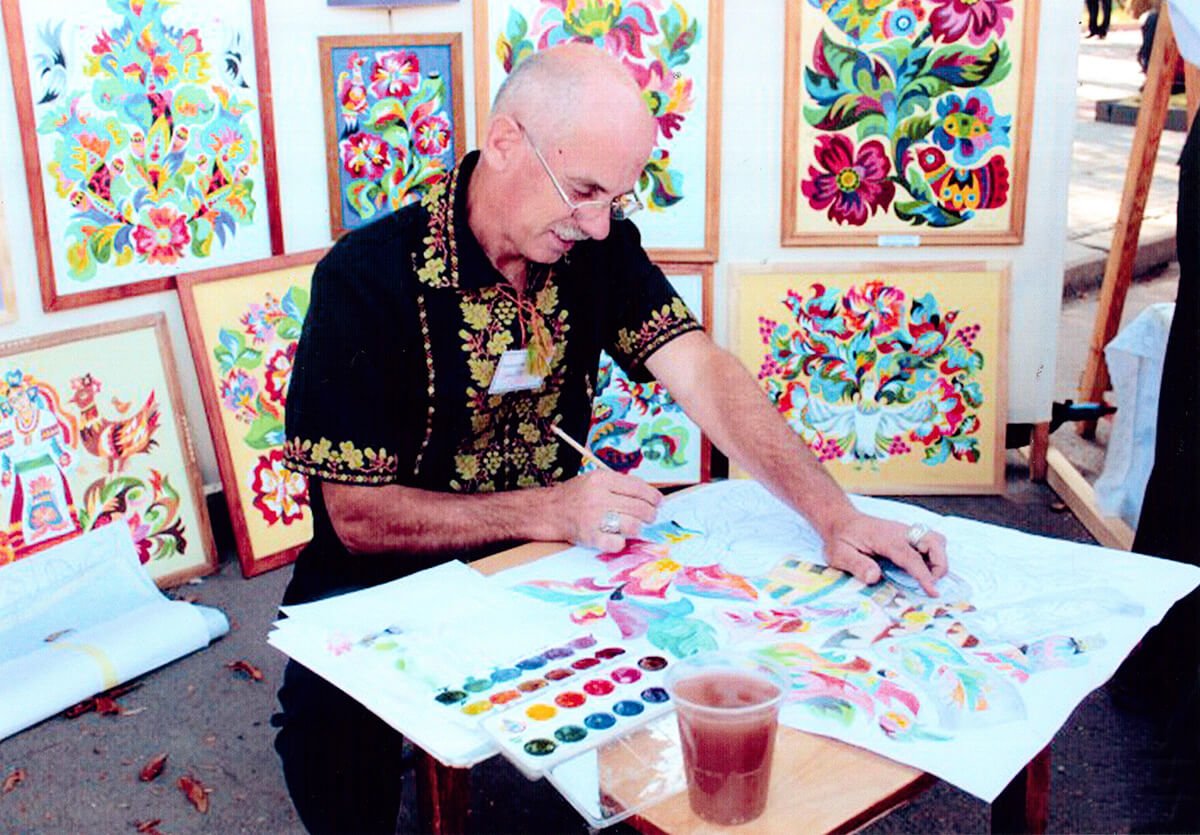 Victor Rakovsky, folk master from the Samchyky village, member of the National Union of Masters of Folk Art, at work

Talented craftswomen painted houses with unique patterns upon request. Houses decorated with fantastic floral ornaments were considered talismans. The pictures on the walls were the business card of every good housewife, and young men looked at them if an unmarried girl grew up in the house. Back in the middle of the last century you could see this painting in Samchyky. Over time, such paintings became more and more rare. After the Second World War, the tradition of painting houses declined and was almost lost. The new life of samchykivka began in the 70s of XX century with the discovery of several patterned houses and chests in the villages of Severyny and Samchyky by amateur artists Oleksandr Pazhymsky and Hennadiy Rakovsky. Since then, local artists of the folk studio "Fakel" (later - "Prosvit") founded by Oleksandr Pazhymsky began to develop this painting as an easel, preserving its traditional elements and developing new plots. 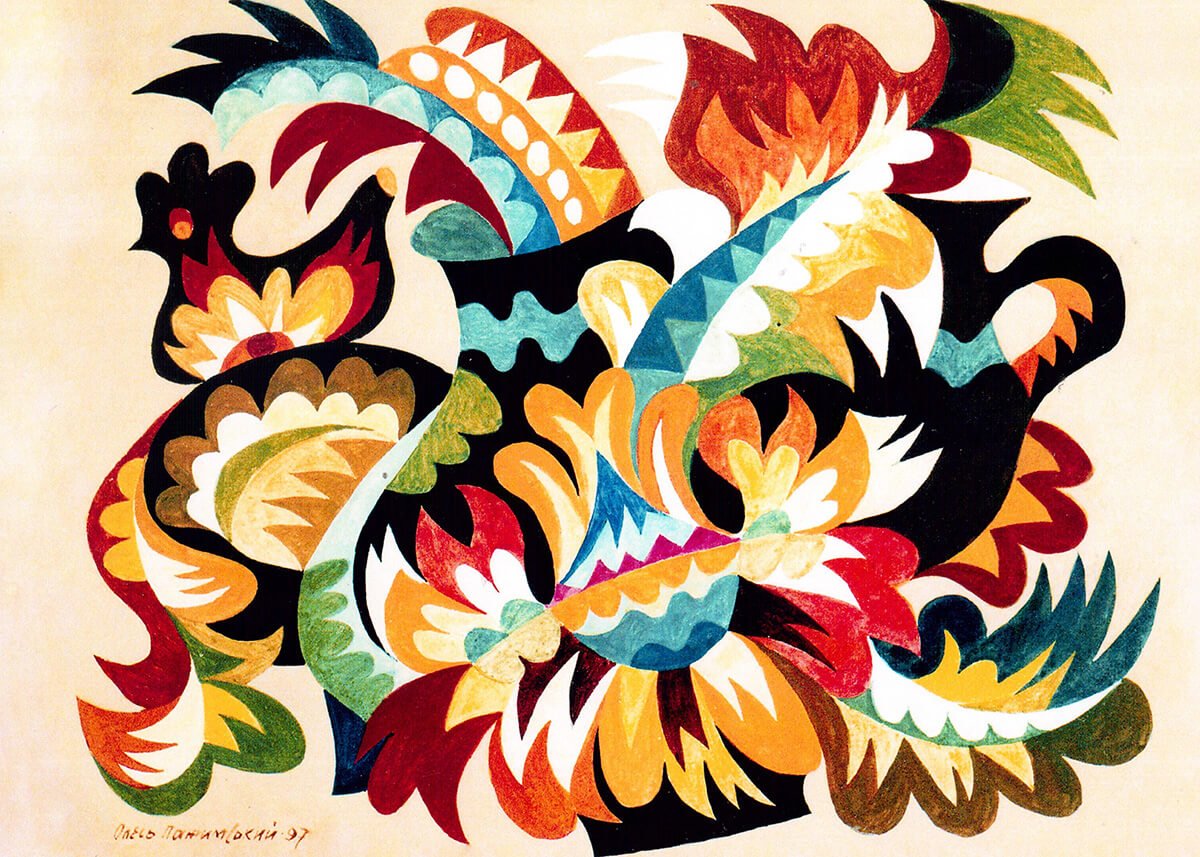 The work of O. Pazhymsky "Potters" 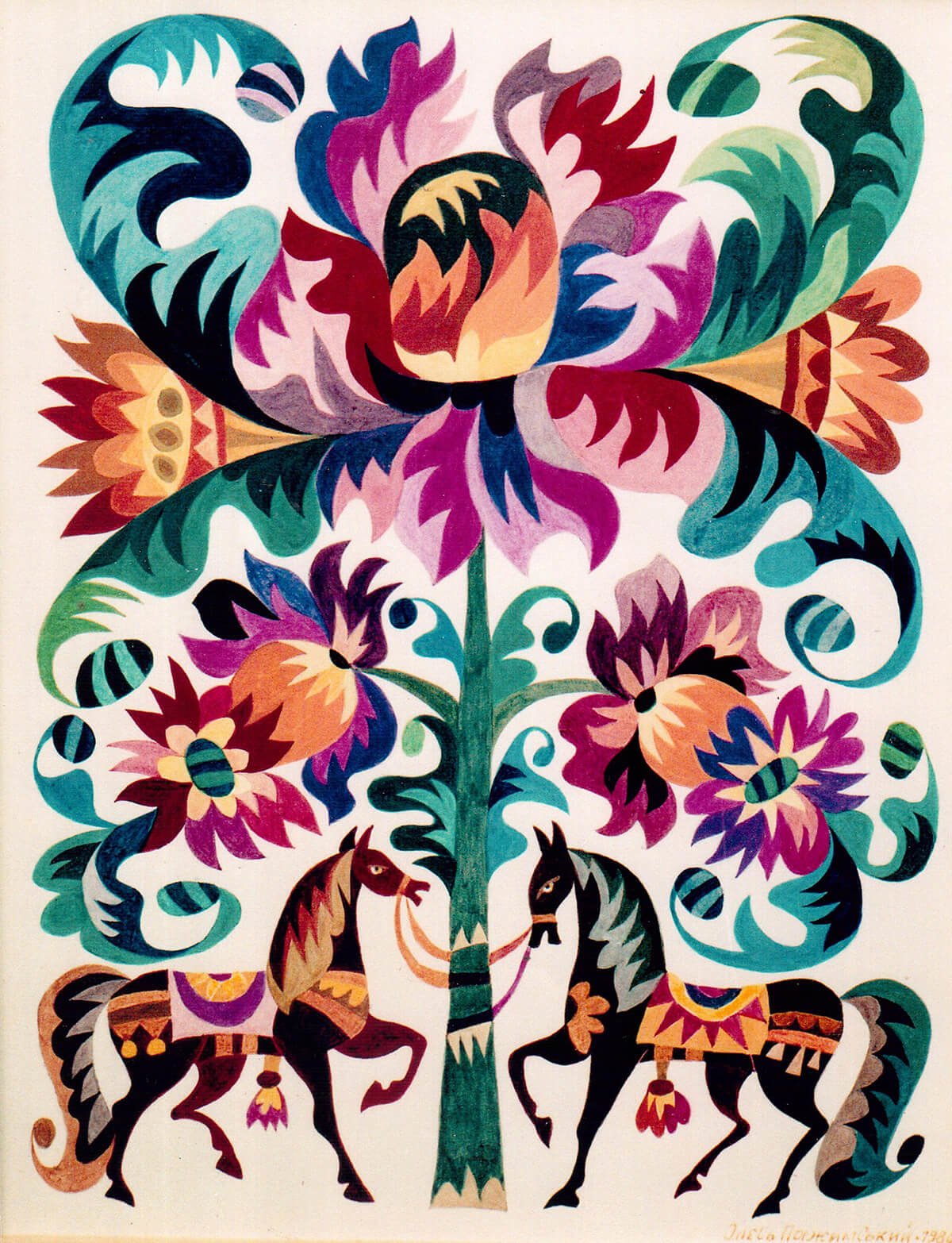 
The peculiarity of samchykivka lies in the plot. These are stories from carols, Christmas carols, Ukrainian folk art, fairy tales and more. The painting is similar to a tapestry, made by a large toothed pattern with active filling of the plane with large massive elements, which are divided by contrasting or subcontracting colors. It is characterized by the motif of a curved feather, toothed leaves, flower petals tongues, the impression of carelessness in the curved lines of patterns, which are peculiar components of the artistic language of the masters of samchykivka.

The main theme of this painting is plant motifs in their various interpretations. Each ornament had its own name, by which it could be immediately recognized. Periwinkle, sunflowers, rye, spikelets, poppies, bells, berries, buds, viburnum, twigs are most often found in the works of the authors of Samchyki's painting. In the pictures, flowers from recognizable and familiar suddenly become fabulous, fantastic plants, acquiring an unsurpassed Ukrainian flavor.

One of the most popular and widespread ornaments is the image of a flowerpot as a symbol of the universe, the "tree of life", as it was understood in ancient times by our ancestors. This is a fairy-tale tree, which can be based on the pysanka as a symbol of the beginning of the genus or acorns from which the tree sprouts. The trunk of the tree symbolizes the continuation of life and kind. Birds are often depicted near it or in the crown of a tree, which are integral companions of life. So floral ornament is organically intertwined in the painting with elements of the animal world.

The sacred meaning of color 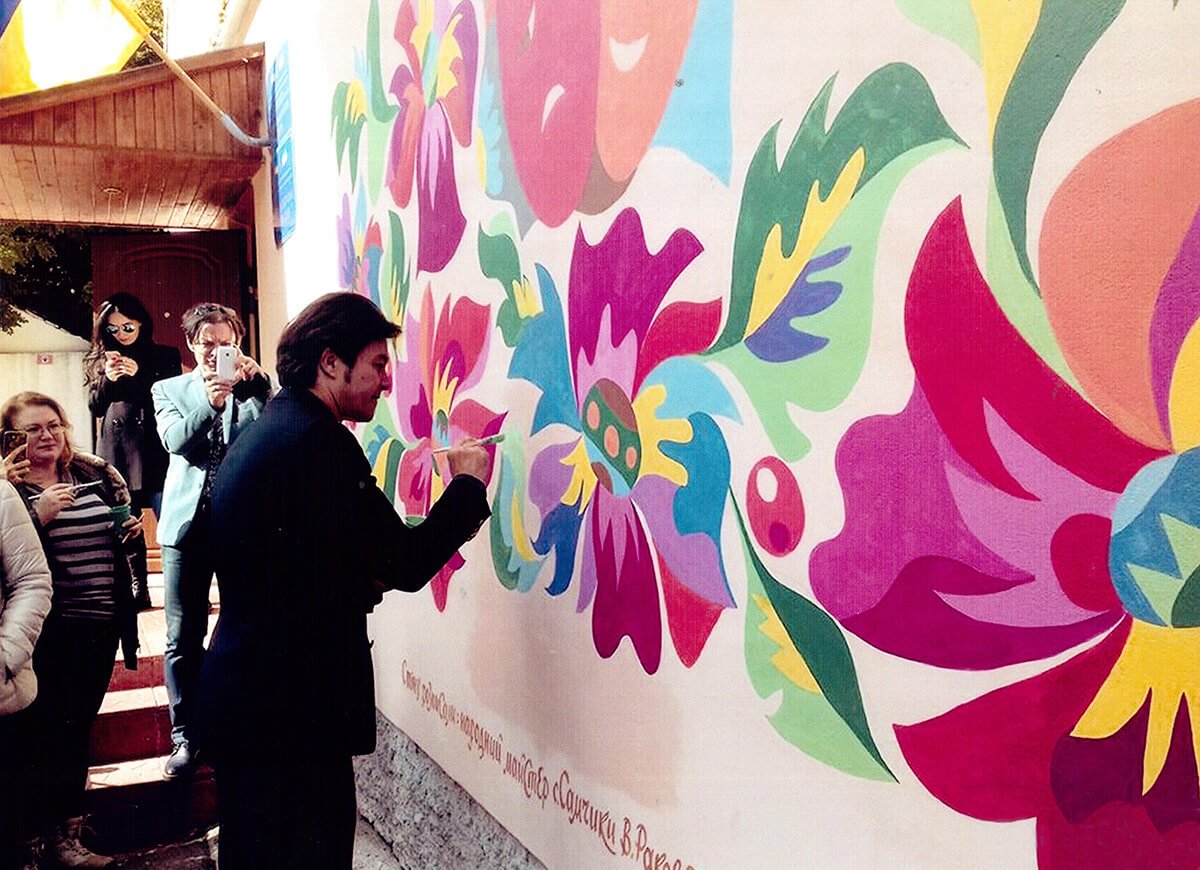 Yevhen Nyschuk, Minister of Culture of Ukraine (2014 - 2019), also joined to witness the miracle of Samchykivka painting 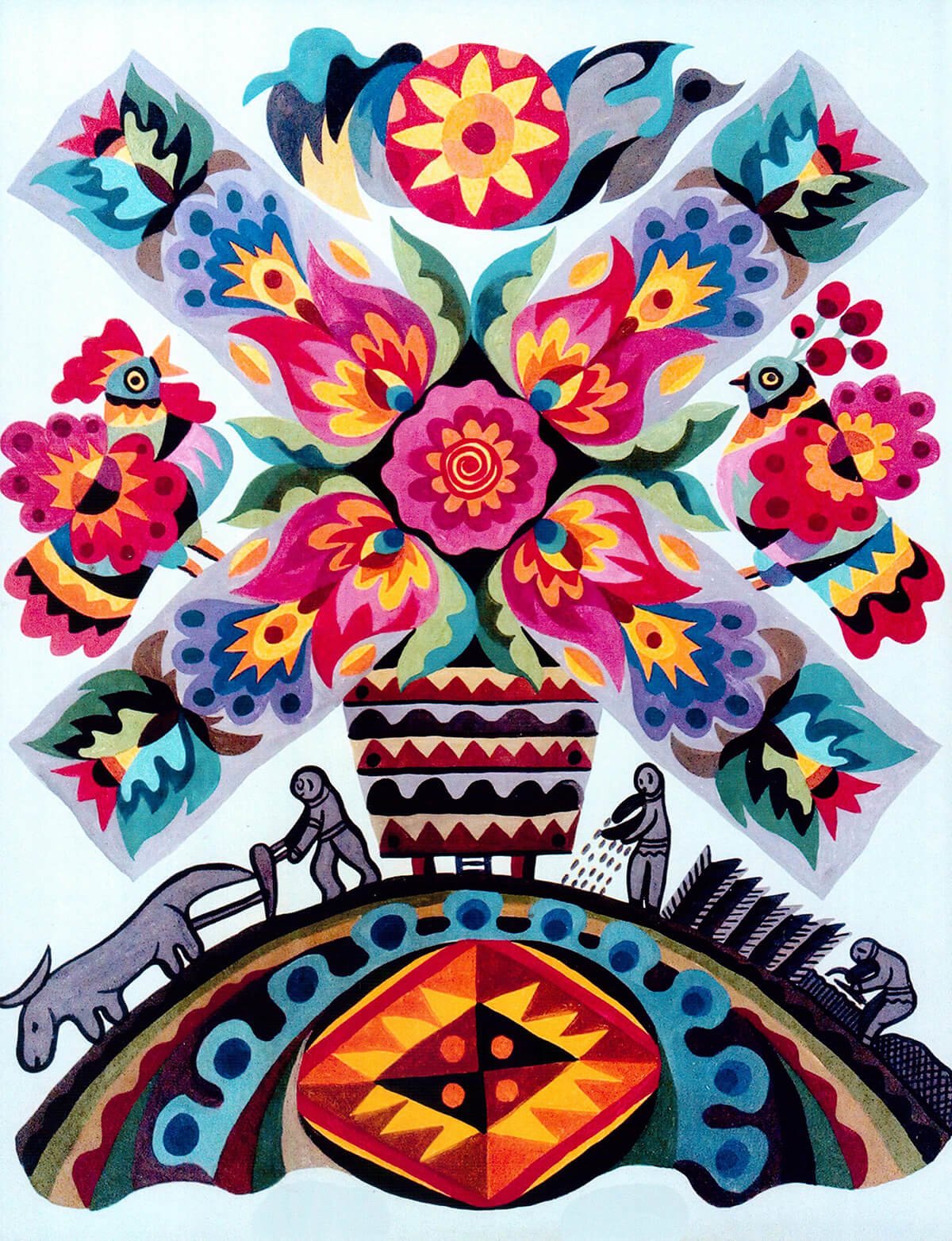 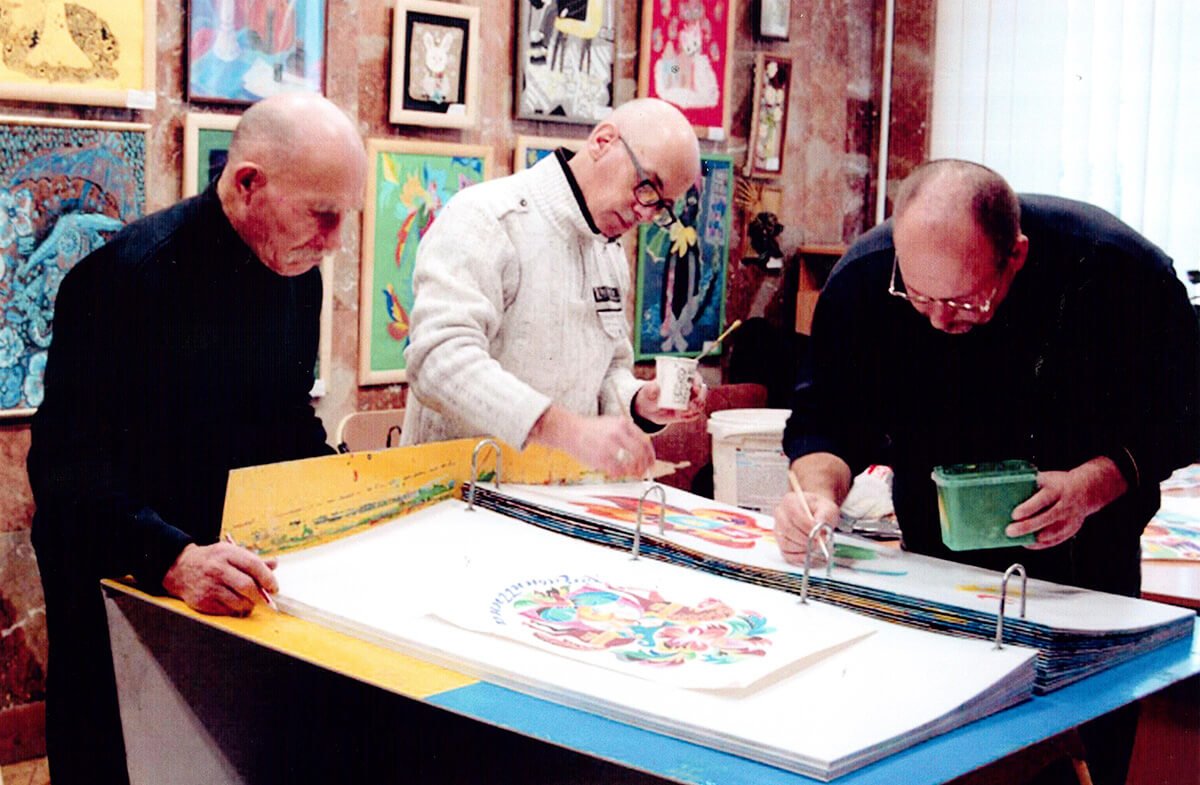 Samchykivka appeared in the "Book of Unity". Work made by V. Rakovsky, S. Kasyanov, O. Pazhimsky

The color scheme of samchykivka also has a sacred meaning. It always has one unifying color: usually a dark shade that will stand out from the others. Black is often used - it separates the two neighbouring colors in the picture and creates depth. Red, blue, green, yellow are the main colors that form the basis of the painting. Additionally, brown, pink and purple paints are also used.

As a background for their work, masters often use white - a symbol of purity, innocence, beauty, youth and joy. Even if the ornament is painted on a gray, black or blue background, white must be added to the main ornament - flowers, leaves, etc. The pattern itself is mostly done in red, which symbolizes the fullness of life, the energy of freedom. Black is added to emphasize the ornament and enhance other colors.

The Samchykivka painting is based on a planar ornament. That is, colors are superimposed on planes (colored spots), but there is no volume. Its plot includes elements, the number of which does not exceed seven. Most common are drawings of the most versatile birds - chicken, rooster, nightingale, goose, stork, magpie, pigeon, swans. There are also images of animals that have always been most associated with the life and way of life of people (dogs, cats, horses, foxes, bunnies, squirrels). Artists also use elements that are more common in Easter painting. These are stylized paws, horns, curls, a cross, stripes, stars, curves, dots. The authors of the Samchykivka painting also add to their works images of people, mostly Cossacks or beautiful Ukrainian women. The composition of the ornament is always clear, consisting of bottom, middle, top and end. At the bottom are large elements, which become smaller to the top of the figure. It is this structure that makes the completed picture the most accessible and understandable. 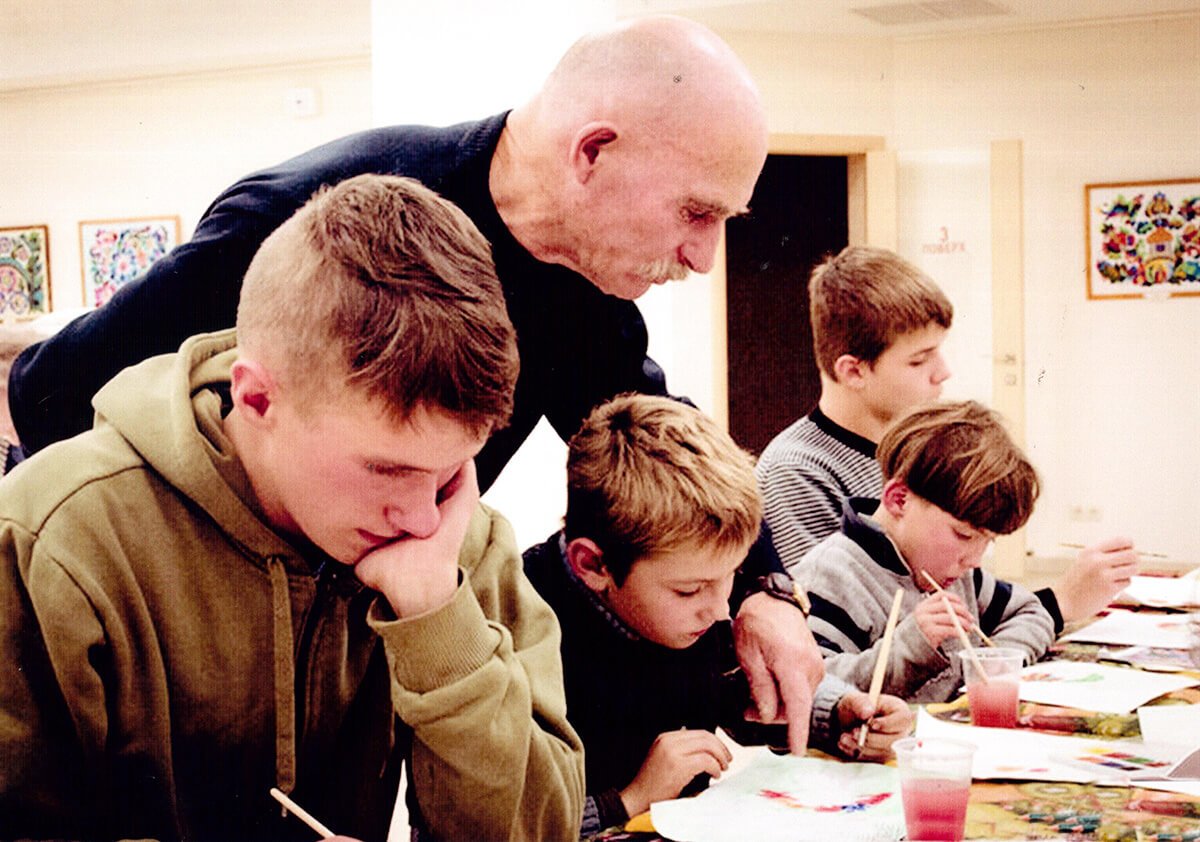 Oleksandr Pazhymsky, ethnographer, ethnographer, historian and artist, shares the secrets of professional skills with the pupils of the Cossack camp. 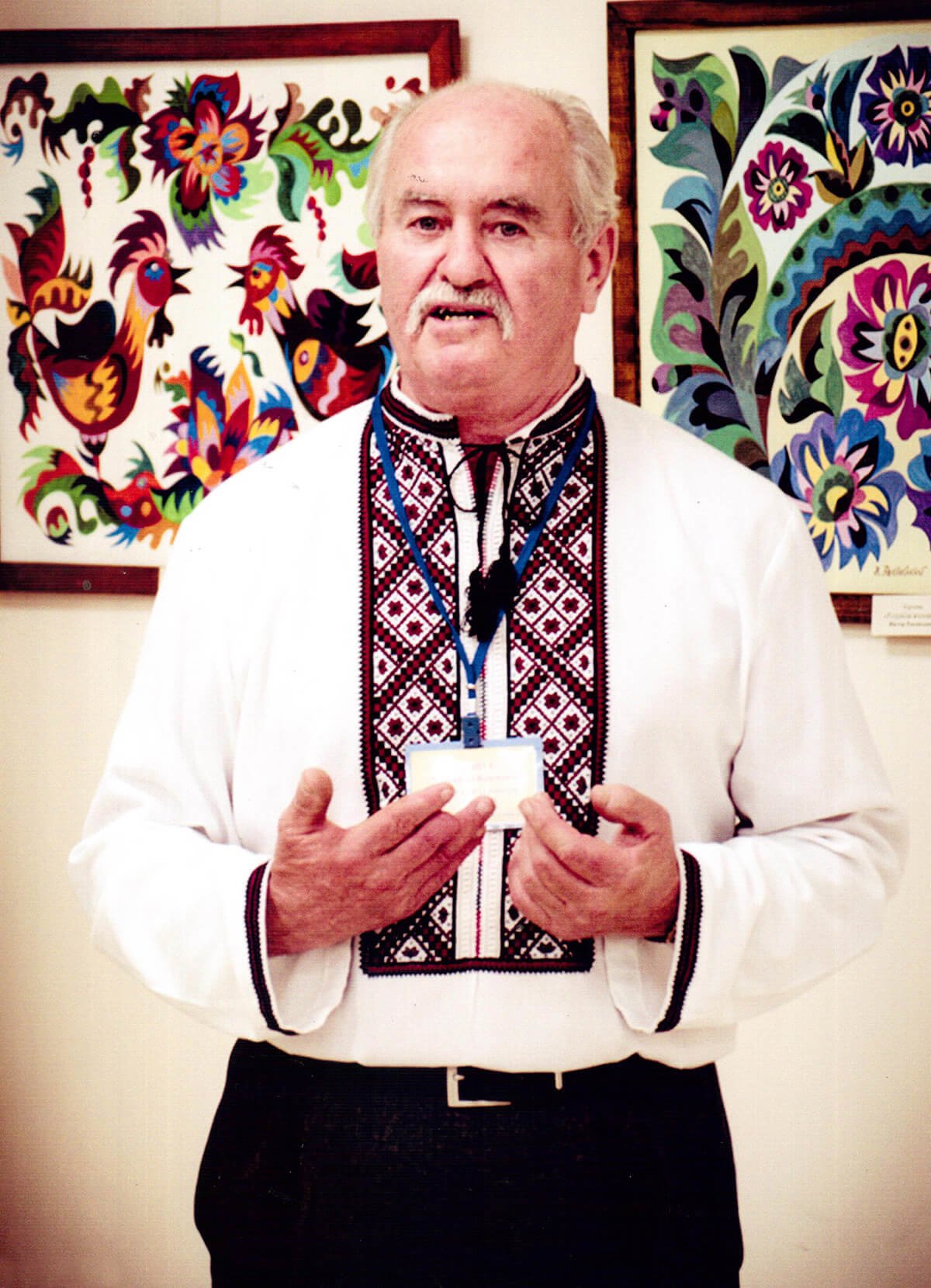 Artists of the Samchykivka tradition decorate village houses, paint pictures, teach future masters this technique and popularize it in every possible way. Traditional materials used by craftsmen for their products are paper, wood and plaster surfaces; frames are made of wood, straw or bark. The work uses acrylic paints and gouache. When using gouache, the finished work after drying is covered with varnish, which the masters make according to their own recipe. First, a sketch is drawn with a pencil. Then the paint is applied: this is how the colors that will be in the picture are indicated. The main colors are color - from light to dark. The artist devises a plot composition: the characters of the picture and the elements that surround them.

There is a children’s art school of traditional folk art in Samchyky, master classes are constantly held for all categories of the population, traveling exhibitions are organized, one of which covers the Dnieper, Polissya, Slobozhanshchina, Zaporozhye, Azov and Black Sea regions. In October 2018, the project “New Life of Samchykivsky Painting” was presented in Kyiv, implemented with the support of the Ukrainian Cultural Foundation within the partnership of the Art Initiative “UAMAZE” and the Khmelnytsky Regional Scientific and Methodological Center of Culture and Arts.

The ornament of samchykivka can be seen on ceramics, clothes, postcards, posters, calendars. The painting, which was originally used to decorate houses and interiors, moved to other areas and gained new life. Serhiy Kasyanov and his colleagues paint the walls of houses not only at home. Sometimes they are invited abroad, mostly to Poland and the Czech Republic. Samchykivka painting is in demand there.

By the order of the Ministry of Culture of Ukraine of July 4, 2019 №510 "Tradition of decorative painting of the village of Samchyky” is included in the National list of elements of intangible cultural heritage of Ukraine.